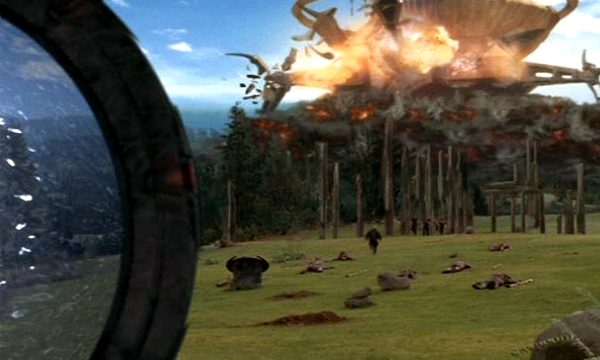 ‘He is now a bigger threat than ever before …’

Welcome to the official kick-off for Month 4 of the Stargate Rewatch! All through November are watching Stargate SG-1 Season Four, easily one of the show’s strongest years. Apophis is on the rise, the System Lords are on the run, and there are planets out there that need saving.

As you get ready to kick off this month’s episodes with “Small Victories,” here’s your intro to Season Four and links to everything Season Four-ish on GateWorld!

We want to hear from you! If you are blogging about your Rewatch, writing new fanfic, creating artwork, or doing something else related to SG-1 Season Four, e-mail us a brief description and a link.

Learn more about the Stargate Rewatch and how you can participate. It’s not too late to catch up!

Stargate SG-1 Season Four aired on Showtime in the U.S. from 2000 to 2001. With Apophis back from the dead, the team waits for him to consolidate his power and make his next move. Meanwhile, the Tok’ra Anise introduces a few problems; several planets pose ethical conundrums for Earth; and Osiris emerges from her long slumber. Teal’c swears a revenge oath against the young Goa’uld spy Tanith, and Daniel makes a new buddy after he is captured by a primitive Unas.

Come back in two weeks to cast your ballot for the Season Four Awards!

You should have a NEW CATEGORY, the Episode I would not show my worst Enemy.

Hello season 4! The episodes “Upgrades,” “Watergate,” and so much more. And, with this season, all of the episodes on DVD have commentary. Yes! Doing my happy dance. I like the addition of the Coolest Technology category.

Season 4!!!
Even though I have jumped the gun a bit and just finished Season 5, I did watch Season 4.
Can’t wait to post my vote.

Haven’t watched season 4 in a while (I’m behind), but . . . I’d like to nominate Beneath the Surface for best episode. I think Zatark Detector for coolest tech. Worst costuming/make-up mistake (I know, I know, but come on): Teal’c’s goatee.