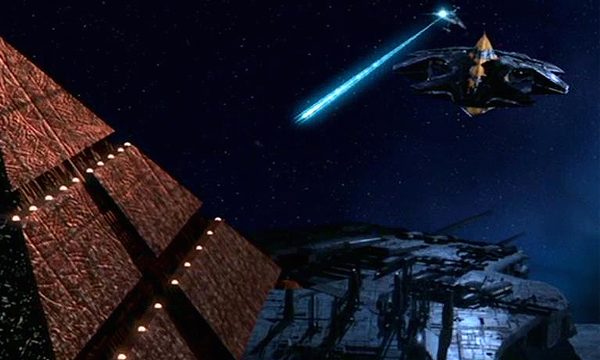 It’s that time again! We’re wrapping up 2011 with the best of Stargate SG-1 Season Five, as the fifth month of the epic Stargate Rewatch draws to a close. (One year from now, we’ll be in the final days of the Rewatch!) You’ve nominated your favorite episodes, character moments and more from SG-1’s fifth season, and now it’s time to vote.

Before you cast your ballot, you might be interested to see the previous months’ winners: Season One, Season Two, and Season Three, and Season Four!

You don’t have to be a Rewatch participant to vote, but please vote only once! Voting will close on December 30. We’ll announce the winners in each category at the end of the month.

Remember to come back in January to help nominate the very best of SG-1 Season Six! The Stargate Rewatch is headed into the second half of SG-1’s adventures, and if you are a quick watcher it’s still not too late to catch up. Learn more here.

The polls are now closed. Thanks for voting!

Some tough decisions this season. As SG-1 got better and better, great moments became more frequent. Looking forward to seeing the results.

There are some tough decisions for me too, but some are pretty easy.

Anything involving Rodney McKay gets my vote. I only watched Planet of the Apes because it has David Hewlett.

tough for this season because I’m trying to think in the context of Season 5, Anubis is awesome but we really don’t get into his badness until season 6, so I couldn’t vote for him there. And I LOVE Jonas Quinn, but for the one episode we see him his character wasn’t as awesome as in Season 6, so again, couldn’t choose him there

I think by sending McKay to Antarctica you mean Russia. Do you know what the food is like in Russia?

Somehow I missed the nominating period so I wasn’t able to offer my favourites, and now I can feel the effects. None of my favourite season 5 episodes (Red Sky, The Warrior, Revelations) made it to the voting :( oh well. I’ll do my best to nominate for season 6 – the best season of SG-1 ever, IMO :)

I loved Wormhole X-Treme! One of the funniest episodes ever done!

*sigh* another season with little to interest me. And then they killed off all those many Tok’ra, completely unnecessarily!