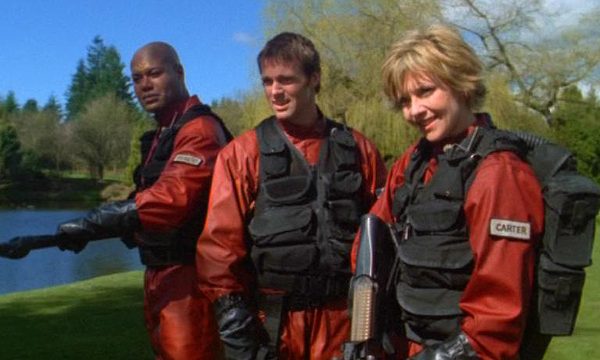 February means it’s SG-1 Season Seven month on GateWorld as we celebrate 17 years of Stargate history with the Stargate Rewatch! As you enjoy another 22 episodes in your Rewatch program, here’s your intro to SG-1‘s seventh year and links to everything related here on GateWorld.

Learn more about the Stargate Rewatch and how you can participate all throughout 2012.

Believing the sixth year would be their last, the writers of Stargate SG-1 prepared for the end (and a future in movies). But the show’s move to the SCI FI Channel proved to be a major boon, with ratings surging and a new burst of creative energy behind the scenes. Season Seven was a go, and after a year off Michael Shanks was returning full-time as Dr. Daniel Jackson.

But that meant the (some say unceremonious) departure of Corin Nemec’s Jonas Quinn, who returned to his homeworld of Langara to help build its future. Meanwhile, Daniel struggled to reintegrate into the team and his mortal life, while Teal’c’s hopes for the future of the Free Jaffa got a big boost when SG-1 met Ishta and the female warriors of the Hak’tyl. Sam Carter tried to put Jack behind her and start a serious relationship with civilian Pete Shanahan. And a beloved member of Stargate Command would fall in the line of duty.

Anubis, meanwhile, was continuing his quest for galactic domination by introducing seemingly unstoppable Kull warriors, and would eventually turn his eye toward Earth and attack directly. Only the discovery of a lost Ancient weapon could hope to save the planet from certain doom.

Come back in two weeks to cast your ballot for the Season Seven Awards!

Samantha Carter doll! Keeping my eyes peeled for that one!

Cool. I loved season 7. The Lost City is my all time favorite Stargate episode of all three series.