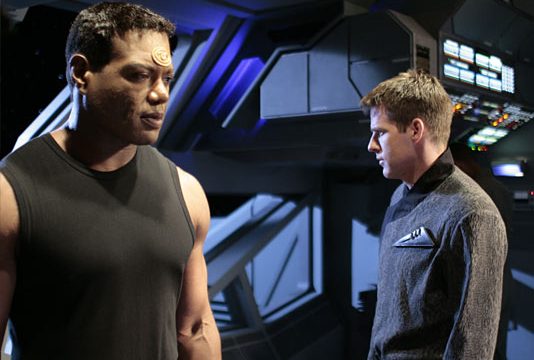 After the Earth ship Odyssey is captured by the Lucian Alliance, Cameron Mitchell must go undercover inside the deadly organization to prevent his teammates from becoming casualties of an Alliance civil war.

“Company of Thieves” on GateWorld:

Was some nice team moments. Not up to the same calibre as some of the other episodes of the week.

Few plot holes and miracle ggambles that paid off.

Did like.. Antao? Guy that played Ari in NCIS good actor should of been in more episodes as a thorn in sg1’s side.

This was one of the worst episodes of season 10, IMO. The commander of the odyssey was killed off for no good reason (I had no attachment whatsoever to him, many of the plot points were clumsy (Mitchell posing as the reclusive Keflin AND as Nethan at the same time), the bounty hunter being so stupid, Teal’c being tortured yet again for no reason… Damn, I could go on forever.

For me, this was one of those “so-so” episodes. Nothing to exciting. I kinda saw it as a “filler” episode. I tend not to like those. As usual though, it was good to see an old episode of SG-1.