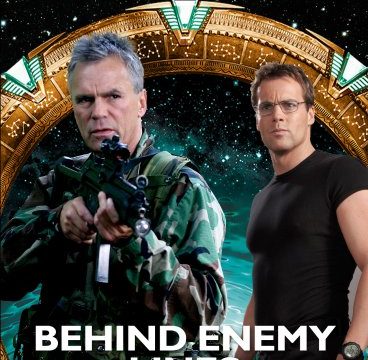 The newest SG-1 adventure from Fandemonium has arrived! Sally Malcolm’s short novella Behind Enemy Lines was officially released at the end of August, and is available in Kindle format now on Amazon.

The story brings back fan favorite Jack O’Neill — no, the other Jack O’Neill — a young clone created by the Asgard Loki in the seventh season episode “Fragile Balance.” Now ten years older, the young Jack must come to terms with himself and his future after running afoul of the law:

Ten years after STARGATE SG-1: Fragile Balance, General Jack O’Neill has a problem. His clone, created by the rogue Asgard, Loki, has gotten into trouble — and drawn the attention of Homeland Security.

As tensions rise off-world, the young O’Neill is forced to confront who he really is — and to decide whether his new life is worth fighting for …

Behind Enemy Lines clocks in at 142 pages and can be downloaded on your Kindle for $2.99. If you don’t have a Kindle and want to give it a read, Amazon offers a free Kindle app for other tablets, computers, and mobile devices.

Fandemonium has announced several upcoming titles in the Stargate SG-1 and Stargate Atlantis novel series. Next up: author Geonn Cannon (SG-1: Two Roads) returns to the series with the SG-1 story Female of the Species, which sees Samantha Carter and Vala Mal Doran working together to escape an alien prison.

STARGATE ATLANTIS: Pride of the Genii
by Melissa Scott
Set in the STARGATE Legacy universe, there’s trouble afoot for Colonel Sheppard’s team when the Genii’s Ancient cruiser, The Pride of the Genii, goes missing. Amid secrets and lies, the Atlantis team must discover the truth if they’re to escape with their lives. (Winter 2017/2018)

STARGATE SG-1: Within
by Susannah Sinard
While the Entity decides which member of SG-1 to possess (Season Four’s “Entity”), it reviews the team’s mission reports. What it learns about a recent mission, in which SG-1 is captured by a Goa’uld whose host is able to suppress the symbiote, makes its decision to possess Major Carter inevitable. (Spring 2018)

STARGATE ATLANTIS: From the Depths (Novella)
by Amy Griswold
Dr. Weir finds herself embroiled in a sensitive diplomatic negotiation when the Atlantis team discovers a species of sentient undersea life living in the waters around Atlantis. Eager to help the creatures return to their home world, the Atlantis team’s mission runs into trouble when they find a hostile Genii base on the creature’s planet. (Summer 2018)

Visit StargateNovels.com and follow Fandemonium on Twitter at @StargateNovels for the latest! You can keep up with the whole library of Stargate novels with GateWorld’s newly expanded Books section.