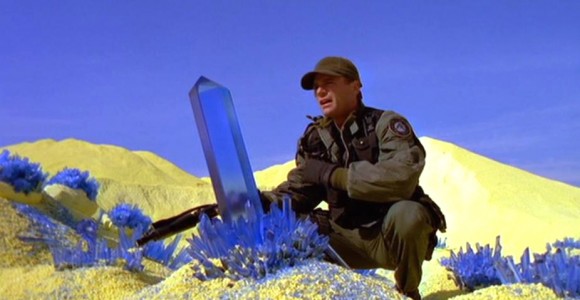 The team discovers a crystalline alien species with the capability of assuming human form. O'Neill comes to terms with the death of his son.

SG-1 explores the planet designated P3X-562, where they find clusters of blue crystals on the ground. It looks as though someone gathered the crystals together and destroyed them with staff weapons. The team splits up to look around, and when Jack O’Neill takes a closer look at one of the larger crystals he gets blasted unconscious. A duplicate Colonel O’Neill appears, and ends up accompanying the team back to Earth.

While Samantha Carter and Daniel Jackson study the crystals at Stargate Command, Jack heads home. But instead of going to his bachelor pad he winds up at the home of his ex-wife, Sara. He tells her he is looking for Charlie, their young son ... who in fact died more than a year earlier after accidentally shooting himself with the Colonel’s gun.

Sara is understandably shocked, but clearly something is wrong with Jack. The entity saw that Jack had been hurt after encountering its energy, and is now attempting to heal him. But instead of understanding that Jack was injured by the physical jolt, the entity sees that his deepest pain is psychological. It does not understand that Charlie is gone, and cannot simply be found again to heal the wound in Jack's heart.

The entity can’t hold itself together much longer, and begins experiencing disturbing tremors. Sara brings him to a local hospital in Colorado Springs. After the real Jack returns through the Stargate the team realizes that the other one wasn’t who they thought. They track him to the hospital, where Colonel O’Neill has a deeply personal encounter with the visage of his son. He will lead the entity home to its planet, and experience a bit of healing himself.