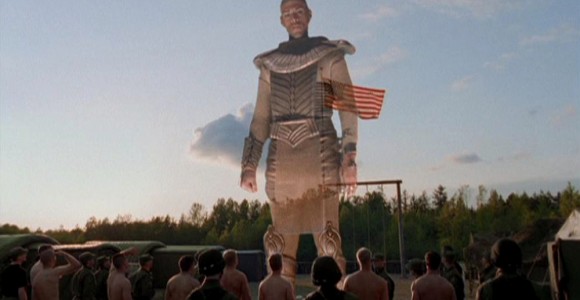 While the concept underlying the plot in "Rules of Engagement" is an interesting one and the acting is above par, this potentially outstanding episode is hampered by plot holes, a slow pace, and a less-than-believable resolution.

The idea that Apophis tests his recruits by slaughtering them in a live-fire exercise, in which at least half are destined to die or be rejected as the "weak," seems wasteful, even by Goa'uld standards. While I could put that premise down to the Goa'uld's high disregard for life (particularly human), there were other areas of the plot that I could not stop questioning.

For example, while I understood why the Jaffa masters were called back to serve Apophis, especially given the desperation of the situation portrayed in "Serpent's Song," I wonder why the Jaffa would leave behind a group of highly trained and loyal humans. Teal'c indicates that it is customary for Apophis to use humans as fodder in battle, particularly in desperate times, so why was this group not used?

I was also unconvinced by the resolution offered. The writers, director and actors did a very good job of establishing how brain washed these humans are. In fact, I thought the acting of the young soldiers, Rogers, Nelson, and the captain, was a highlight of the episode. I was thoroughly convinced of their fanatical belief in their cause and their devotion to Apophis as a god. Given this background, I find it hard to believe that one airing of a tape of Apophis's death is going to do the trick; yet, in the closing scene, we see each of the soldiers drop their shoulders and walk away.

This is not the reaction of I would expect of people who have dedicated themselves to one idea for such a long time. I would have thought it to be much more psychologically realistic to see some of the soldiers have difficulty dealing with this truth - to the point of suicide or re-dedication to the goal, even in view of more evidence. It is a common reaction of those who have had a central truth of life refuted to be unable to deal with the cognitive dissonance. If simply putting on a video were enough to turn around the world's kooks and fanatics, the world would be much less interesting.

It seemed to me that the relationship Jack and Teal'c build with Rogers is what enables Rogers to deal with the truth about Apophis. I was very pleased with the glimpse into Jack's character revealed through his interaction with Rogers, particularly in the infirmary scene. Jack is not only objectively concerned about the loss of human life that SG-1 has inadvertently set in motion, but the sad prospect of these young men wasting their lives and dying for nothing. It is a wonderful glimpse in to what is lying beneath Jack's sometimes-gruff exterior.

Jack's caring also comes out in a somewhat twisted way with his shaking and striking of Rogers in the return to the training planet. I was also touched by Jack and Teal'c's words of comfort for Rogers when he is believed to be dying.

Unfortunately, the story was a little lacking in pacing and execution. It seemed the plot moved very slowly. Even during the battle sequences I felt a lack of tension, something Stargate does not usually fail to deliver. I was also disappointed with the lack of intellect demonstrated by the whole of the team. It seemed clear, only a few minutes into the show, what was going on on the planet. Indeed, Teal'c recognized the exercises and their meaning almost immediately.

It also seemed clear how dedicated this group was in their belief. I'm not sure why SG-1 decided to try the old "Apophis is dead" speech. Given their previous attempt at contradicting the order of the soldiers' existence and their well-evidenced fanaticism, I would think SG-1 would have known that this approach would not work, and would only waste the trust and standing they had by virtue of being Apophis's emissaries. As Teal'c notes,"Apophis has lived for thousands of years. It is like we said the sun would not rise again."

What is worse is Jack's relatively lame attempt at persuasion. Canceled because of rain?! Even I wasn't convinced, and I haven't spent years being brain washed by someone who appears to have god-like powers. I was also disappointed Sam had to do the thinking for Jack in coming up with the solution, and was outright disturbed by Daniel's lack of attention as Jack goes over the last-minute mission details.

There were several moments that featured the clever dialogue I've come to expect from the Stargate writing team. The "Lord" Hammond bit was very amusing, as was the "four eyes" exchange and the "huge honkin' Apophis." My favorite line was Jack's response to the captain's assertion that they would be in even more trouble if they continued to ignore the rules: "More trouble than death?"

Although I enjoyed the concept of this well-acted episode, the execution interfered with that enjoyment. Ironically, I was not engaged by "Rules of Engagement."