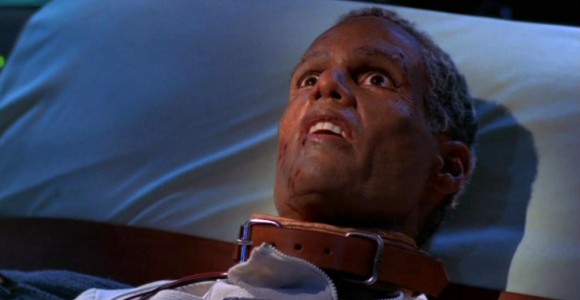 Apophis, SG-1's greatest enemy, seeks sanctuary from a rival Goa'uld and ends up near death in the S.G.C. infirmary – completely at the mercies of his human foe.

SG-1 has received a strange transmission consisting only of coordinates for a planet. Believing the signal came from the Tok'ra ("The Tok'ra, Part 2"), the team visits the desert world and waits for them to show up.

The Tok'ra do not appear – instead, a Goa'uld death glider appears in the sky, racing toward them. It is being pursued, and is quickly shot down. The small craft crashes into a hill near the Stargate, and SG-1 runs to investigate. There they find a bloodied Apophis, lying on the ground and pleading for help.

The team grabs the fallen Goa'uld System Lord, and brings him back through the gate to the S.G.C. General Hammond is shocked to see him, and Apophis is brought to the infirmary to have his severe wounds treated.

Because of his defeat in his attempt to attack Earth ("The Serpent's Lair"), Apophis has lost his place among the System Lords. The balance of power has shifted, and another Goa'uld captured the weakened Apophis.

Apophis finally reveals his name: he was captured by Sokar, who pursues him even now. Apophis signaled the S.G.C. and sought sanctuary among them, because he knew Sokar would follow him and kill him, and he wanted to take all of Earth down with him.

Hammond is not anxious to give Apophis back to Sokar, even when the Tok'ra arrive and tell them that they must. Not only has Apophis sought sanctuary and offered Earth a chance to learn valuable Goa'uld secrets, but they must recognize that they are dealing with two life forms in one body. The host is an innocent scribe from ancient Egypt, who has spent thousands of years trapped inside his own mind. The S.G.C. is not about to turn him over to be tortured by Sokar.

Martouf, the Tok'ra representative, cannot convince the team to send Apophis back to the place they found him. They wish Earth well, but before they can leave Sokar dials to the Earth Stargate. He cannot penetrate the iris guarding the gate, but instead fires a particle accelerator at the iris, causing an image to appear. A voice booms out: "People of the Tau'ri – you have taken what is mine. For this, you will be destroyed." The beam's intensity increases, super-heating the iris.

Meanwhile, each member of SG-1 has taken the opportunity to interrogate the helpless Apophis, dying and chained to a bed in the infirmary. Apophis expresses his love for his queen Amonet, the Goa'uld who inhabits the body of Daniel's wife Sha're. Jackson strikes back by telling Apophis that it was not the Goa'uld Heru'ur who stole Apophis's child, but Daniel himself ("Secrets").

Apophis threatens Carter, refusing to tell her how they might guard against Sokar's weapon. He tells her that she will make an excellent host for Sokar's new queen. Carter is disgusted. And when Apophis begins to cry out in excruciating pain, Teal'c tells Dr. Fraiser to let him suffer.

Teal'c himself is delighted at the current situation. He has waited for this day for many years, and tells Apophis that this day, the day of his death, will become a holy day on Teal'c's home planet of Chulak. The Jaffa there no longer follow Apophis, Teal'c tells him. Now, they will use the Goa'uld as they have been used – they will discard their larval Goa'uld when they mature, leaving them to die.

Because a Stargate wormhole can only be maintained for 38 minutes, the S.G.C. has an opportunity: if they can dial out to a planet before Sokar can dial in a second time, they can avoid his weapon. But the S.G.C. computer is too slow, and Sokar reestablishes his attack. The temperature in the Gate Room rises to more than 200 degrees – with S.G.C. personnel firing massive amounts of coolant at the red-hot iris – before the next window of opportunity arises.

Hammond knows that the immediate threat from Sokar is just the tip of the iceberg. If he fails to penetrate the iris, Sokar will simply come in a ship and attack Earth from space – he, or any one of numerous other Goa'uld who wish to get their hands on Apophis. After consulting with the president, Hammond announces that Apophis will be sent back to the planet where he was found.

In the infirmary, Apophis's host has emerged. He is a terrified young man, who has lived thousands of years in a waking nightmare. Speaking in his native language, Daniel promises the man that he will be taken back to Egypt and be buried with honor, and that he will soon be with his wife and children again in the next life.

With a helpless cry of pain, Apophis asks for a new host. O'Neill refuses. "I am afraid," the fallen System Lords says. Moments later, Apophis breathes his last.

Thanks to Captain Carter's rapid-dialing program, the S.G.C. manages to beat Sokar at the next interval, and an outgoing wormhole is established. Apophis's dead body is taken to the Stargate, and sent back to Sokar.

The attack is over, and Earth can be reasonably assured that no Goa'uld will come for them. Sokar was interested in Apophis, not the Tau'ri. As for Apophis, Martouf warns, Sokar can use a sarcophagus to revive him even from death, and torture him as much as he pleases.