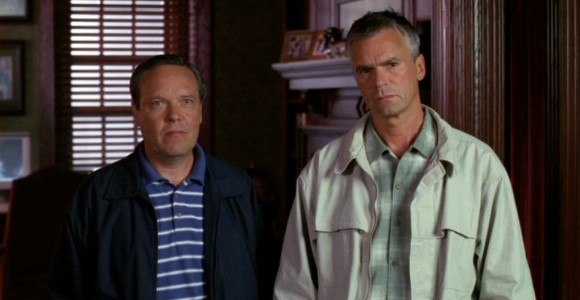 SG-1 must adjust to a new commanding officer when General Hammond steps down – but O'Neill discovers foul play behind the general's resignation.

My reaction to "Chain Reaction" was a subtle one. This episode certainly caught my attention, but it did not leave me with the "Wow!" feeling I've come to look for when I watch Stargate SG-1.

I will say that I enjoyed the story. I enjoyed Teal'c's subtle bit of humor regarding the tradition of singing a lament to a departing warrior ("Fortunately, we are not on Chulak"). I enjoyed the brief glimpse into General Hammond's home life. I enjoyed the espionage revolving around Jack's hunt for the elusive N.I.D. I certainly enjoyed seeing Jack and Maybourne forced to work together, despite their profound, mutual distrust. However, the storyline involving General Bauer's obsession with developing a doomsday weapon left me ... well, "thinking" is the only way I can describe it.

Unfortunately, the very first scene in "Chain Reaction" made me question its believability. SG-1 is pinned down on a planet, under heavy fire. They activate the Stargate, but must wait for the right moment to go through. Suddenly, all four team members emerge at once, then all four stand tall on the ramp, looking back at the event horizon while energy blasts from their assailants continue to pelt the base around them.

First, I would expect the members of SG-1 to come through one by one, or in pairs. Four people running for the gate simultaneously would present an awfully big target. Second, I would expect them to dive for cover once back at the S.G.C., until they know the gate has been deactivated. Standing and looking back at the gate would almost certainly cause one or more to be hit.

Finally, based on the destruction caused in the Gate Room, I'm amazed all four could come through completely unscathed -- or at least nearly so, considering Teal'c did sport a small cut on his forehead.

Following these questionable events, General Hammond announces his retirement, seemingly based solely on this latest threat to his people. I, like Jack, found this to be completely out of character. Fortunately, Jack's refusal to accept the General's flawed reasoning allowed me to accept the dialogue, and hence to look past my problems with the opening scene. However, I would continue to question most of what occurred at the S.G.C. after that.

It took two viewings and a lot of consideration before I decided I could believe in General Bauer's character. At first I thought he might be just another stereotypical, pompous, "Do as I say, regardless of the consequences" character, like we're used to seeing on TV -- the kind writers add when they need someone to push things beyond their limits and cause critical damage, requiring our "heroes" to save the day. But after the second viewing (though not immediately after, I must admit) I did begin to see Bauer as human, and thus real.

Bauer actually came to remind me of stories I've heard from people who have been affected by corporate takeovers loosely disguised as mergers, or simply by changes in executive management. In such instances, the managerial personnel coming in have tended to ignore the local experts, instead surrounding themselves with advisors who have followed them from their previous posts. They want their own imprint on everything, and quickly begin a complete "housecleaning," effectively recreating the entire organization "in their own image," so to speak.

Bauer's immediate demand for bulleted summaries in future mission reports is his way of starting this process. His refusal to listen to the resident expert, a.k.a. Major Carter, also solidifies his control as the mouthpiece for the new majority partner: the N.I.D.

Bauer played that role very well. Yet, in the end, he revealed his own fallibility, which is something I might not expect from the new C.E.O.

If Bauer had been the cardboard character I thought he might be, then I'm sure he would have felt results were all that mattered. The S.G.C. did not get destroyed after his careless test of the doomsday weapon. Nor was the Earth subjected to deadly radiation. "All's well that ends well." End of story.

But that did not appear to be Bauer's attitude. He saw his error, and even brought himself to apologize to Major Carter. It was far too little and far too late, of course, but the apology exhibited character growth nonetheless -- something that is simply not going to happen with a cardboard character.

In addition to spending time trying to determine Bauer's believability, I've also pondered Carter's response to his demands. She voiced her concerns, but as any good military officer would, she backed down when she knew she must, and followed orders despite her obvious disagreement with them. We've seen this trait in her before, particularly in "Scorched Earth," where she was not particularly thrilled with the prospect of destroying the alien culture on the terraforming ship.

Such instances as these make it clear to me that I would never survive in the military! In my own career, I've been told to do things I felt were wrong. Without asking, I've done what Daniel would do: look for, and present, a better alternative.

Daniel did not disappoint me here. Going directly to the source (the S.G.C.'s computers) rather than relying on the apparently doctored report Bauer provided to Major Carter, Daniel continued to analyze data from the planet, even when it appeared to be too late to do so. As the bomb was being deployed, he was still diligently at work, finally seeing and reporting critical information that should have stopped the test -- should have, but didn't. The test was carried out, and the S.G.C., potentially the Earth itself, might have been lost as a result.

Yes, this episode made me think. What consequences might result from everything that happened here? Any number of new stories could be developed from the events that transpired here. Might Kinsey carry out some of his threats to Jack? Was the planet to which Bauer sent the bomb completely destroyed, and if so could its destruction have some unforeseen, negative effects on its solar system, and perhaps our own as well? Could the planet have maintained an established civilization (after all, the S.G.C.'s analysis only covered a fifty mile radius)? What if that civilization had some significance the S.G.C. had been unaware of? Could the destruction of that world result in someone else declaring war on Earth?

I suppose it might have been the senselessness of the whole Bauer business that numbed me to this episode. I want to say such a careless use of authority is completely unreal, but I know it's not. It may well be illogical, but it's only too real.

Writing these reviews often helps me to better understand not only the episode, but it's impact on me. After writing this particular review, I realize now that "Chain Reaction" had a rather large impact. It has left me numb. Corporate takeovers have caused a lot of turmoil in the lives of too many of my own friends. Perhaps entire worlds haven't been threatened; but entire corporations have, in fact, crumbled. I'm constantly dumbfounded by the absurdity of it all, and could easily see myself standing right there beside Teal'c, Carter and Daniel, with my own mouth agape, as yet another new executive ignored the local experts, this time with catastrophic results.

That said, I'd have to give this episode high marks for realism, though I won't be rushing to watch it over and over again. Believability, after all, has very little to do with desirability.