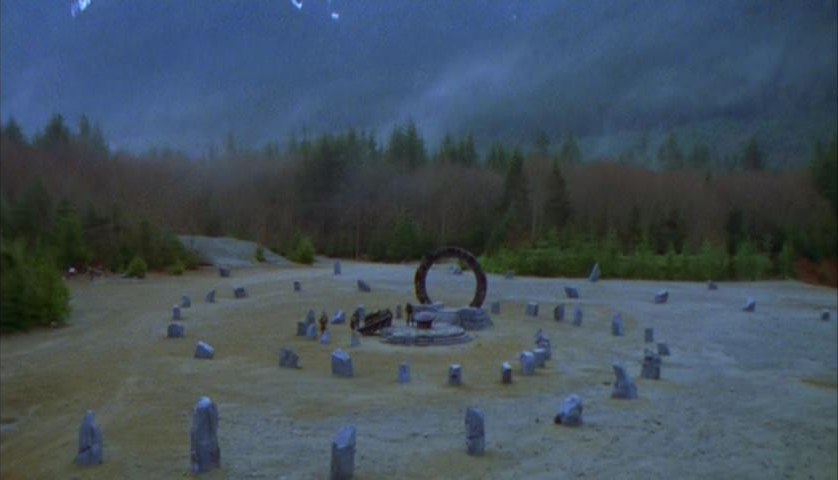 World home to numerous Jaffa, and a base of operations for the Goa'uld Apophis for many years. The land is filled with lush, deciduous forests and alluvial hillsides. The planet orbits a binary star system. Points of interest include the Chompka Groves and the Cordai Plains.

Chulak was liberated following the death of Apophis and, some years later, the rise of the Free Jaffa Nation. When the Ori armies invaded the Milky Way Galaxy Chulak was one of the first worlds their corporeal leader, Adria, targeted.

Chulak is also the name of the planet's capital city.

HOME TO - People of Chulak, Jaffa
FIRST APPEARED - Children of the Gods

Children of the Gods - With Ferretti's help, SG-1 follows Apophis's trail to the planet Chulak, where Sha're and Skaara have been taken prisoner.
Bloodlines - Knowing his son's rite of passage is near, Teal'c and the team return to Chulak to prevent Rya'c from becoming a slave of the false gods.
There But For the Grace of God - In an alternate reality, General O'Neill sends a bomb to Chulak to destroy the planet's Jaffa population.
Family - SG-1 and Bra'tac journey to Chulak to save Rya'c from the clutches of Apophis, and thwart a new plan to destroy Earth.
Into the Fire - Teal'c returns to Chulak in the hopes of gathering a force of rebel Jaffa, but finds a limited response.
Maternal Instinct - Bra'tac arrives on Earth with a contingent of wounded Jaffa, informing them that Apophis has brutally attacked Chulak in search of his son.
The Serpent's Venom - Teal'c returns home to encourage the Jaffa resistance movement, but is betrayed and captured by Heru'ur's forces.
Threshold - In a dream-like state, Teal'c recalls his earlier life with Drey'auc on Chulak.
Lost City, Part 1 - Bra'tac and Teal'c travel to Chulak in the hopes of procuring warriors and weapons for the defense of Earth.
Lost City, Part 2 - SG-1 meets up with Teal'c on Chulak to fly the Jaffa Ronan's Tel'tak to Proclarush to gather Ancient technology.
Moebius, Part 2 - In an alternate timeline, a team from Earth travels to Chulak to re-enlist Teal'c into their ranks, but while there they are captured by Apophis and tortured.
The Fourth Horseman, Part 2 - Teal'c makes his last stand on Chulak, taking Gerak to his father's grave in order to return him to their side.
Ripple Effect - An alternate reality Carter reports that Chulak was one of the first planets to fall in an alternate reality, including Dakara.
Stronghold - Carter leads SG-3 to Chulak to follow leads into Teal'c's disappearance.