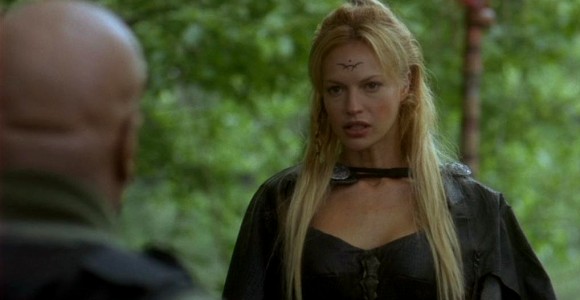 The team finds a fugitive colony of Jaffa women, who must prey on other Jaffa to acquire symbiotes.

There's no point in beating around the bush: Out of the first half of this season, there has not been an episode I've enjoyed as much as "Birthright." It is a well-rounded episode that tells an interesting, absorbing story. There's no one scene that can immediately be pointed out as overdone or superfluous; the pace is appropriate; and even though our heroes aren't personally in peril, the story is loaded with emotion.

If a scene wasn't aimed at furthering the plot, it was intended to further character development, which is one of the true strengths of this episode. The minor characters -- specifically Ishta, Neith, and Mala -- all received sufficient back-story to make them three-dimensional people in whom viewers become invested. Not even Neith, the most surly and combative of the Jaffa, is completely unlikable, and Teal'c's new flame Ishta likewise shows her moments of bad judgment.

The show's main characters also received their 'moments' during interludes in the action. Teal'c had his interplay with Ishta, Daniel his non-conversion with young Nesa, Jack his usual witty repartee with anyone within earshot, and Sam her girl-talk with Mala in the infirmary. Without a doubt, it's these kinds of scenes that bring out the best in the characters.

As "Birthright" was penned by actor Christopher Judge, it's no real surprise that Teal'c's development and emotional quandary receive a great deal of attention. But it is by no means unbalanced. In an episode driven by the perpetual struggle of the Jaffa, one simply expects the team's own resident Jaffa to take a front-and-center role. "Birthright's" cast of minor characters were also well-developed enough to stand on their own.

Finally, considering Teal'c's absence in last week's "Avenger 2.0," it was a pleasure to see him in action.

And not only in action, but in rare form! Perhaps not since "The Warrior" have we seen him so relaxed, or so verbose. "Birthright" provided ample opportunity for Judge to sample a wide palate of emotions for his character: cockiness during the fight with Ishta, determination to convince the Jaffa to take the tretonin, pride and tenderness as he thinks of his son and lost wife, and a seriously sensual side that has been absent since the death of his old flame, Shau'nac (not taking into account, of course, the mind trip that was "The Changeling").

The big risk in the episode was the premise itself: a clan of female Jaffa. Women warriors? Comparisons to the Amazon myth? Could it really be done without coming off like a bad flashback from Xena: Warrior Princess?

In a word, yes -- and it comes down to two factors. These women are fierce, yes, but also somber. They are aware of the task they face, struggling to keep their young alive and save more baby girls condemned to death. The turmoil and pain these women reveal from their pasts made them and their situation seem more real, more serious. And, conversely, the fun that Jack has with the situation, the jokes he makes and the levity he brings, keeps the episode from taking itself too seriously. In the end, it's the best of all possible outcomes: the big risk is more than worth it.

What's good about this episode: Just about everything! It is very different in tone from the previous three episodes, but entertaining, well-acted, well-directed, and well-written. It's definitely one to rewatch.

What's not so good: Depending how comfortable (or not) one is with discussions of male anatomy, there are certain scenes that some viewers might dislike. However, your humble reviewer is not one of those people.

A talent for telling stories is a gift. Yes, there are techniques to learn, and frequent practice can turn a poor writer into a competent one, but the innate eye for a good story is infrequently endowed -- and it's one that Christopher Judge possesses.

"Birthright" has that intangible something that puts it firmly in the "team story" camp. This elusive beast is hard to define, but somehow you know it when you see it. I saw it. The team played off one another's strengths, each character slipping into the narrative with ease, barely a duff moment in sight.

The guest characters were well-rounded and realistic. An episode that could have so easily turned into Ishta: Warrior Princess instead suffered only a couple of minor slips into caricature. Teal'c's interaction with Ishta, Sam's with Mala, and Daniel's with Nesa were sympathetic and human. Ishta and Mala's views on their tenuous existence particularly added to the story without overwhelming it.

And another fascinating story it was. The Jaffa arc continued with an intriguing twist. We were given a deeper insight into the challenges these people face on a daily basis, and were shown the blithe indifference of the Goa'uld to the plight of their slaves.

A discussion of the moral ambiguity that abounded in this episode could fill several articles all on their own. SG-1 has killed others to save their own lives time and again, as have the Jaffa, the Goa'uld and the Tok'ra. Self-preservation is a powerful thing. The Jaffa women were put in an untenable position and their response was to kill those who they considered to be the enemy, even when that enemy consisted of their own family. Yet the solution offered by the S.G.C. was laden with its own issues. It must surely take a great deal of trust to willingly rely on someone else for your very life.

The Tok'ra are in an uncertain position themselves, giving those Jaffa who now depend on their tretonin production a precarious future. And a turning of the tables -- master into slave, a la Season Five's "Beast of Burden" -- is something with which each of the Jaffa must come to terms. With the rampant evil that the Goa'uld represent, is there really one right solution? Or are there merely a range of distasteful solutions to the Goa'uld menace that the Jaffa and humans alike must live with for the sake of the greater good?

I mentioned earlier that there was barely a duff moment with the team's behavior. The lone lump of coal among the diamonds was Jack's behavior. He made command decisions, yet stepped back when necessary to allow Sam to negotiate with the Jaffa women alone, obviously satisfied that his team is fully capable. But his peculiar fascination with the Jaffa women went far over the line of gentlemanly behavior. Where has this come from? First there was the worrying behavior from a pushing-50 yr old male mind in the body of a teen when faced with teenage girls at the end of "Fragile Balance;" now this volunteering to "help" the Jaffa women with reproduction. Is the Colonel suffering from a mid-life crisis this season?

A few other minor points bothered me during "Birthright." The fight scene between Teal'c and Ishta was a little choppy action-wise, but it needed to be included to show the lesson that Teal'c learned. The experimental scene changing which alternated between Teal'c/Ishta and Sam/Mala in order to spice up some exposition was a nice idea which didn't quite achieve its goal. The Jaffa women heading out to kill once again in order to obtain a symbiote for Nesa struck me as rather odd when there were at least three viable specimens sitting in jars at the S.G.C.

And, no matter how excellent almost every special effect is, somehow the squealing, writhing symbiotes never manage to look real.

So, Teal'c and Ishta -- is it a true romance? Can two drug-dependent Jaffa make it in a war-torn galaxy? We can only wait and see.

And finally, also worth note: Teal'c's comment that he'd spoken more in two days than he had in many years made me giggle. A subtle dig at earlier seasons where he spent so long as set decoration, or a clear demonstration of his compatibility with Ishta? I suspect we'll never know.