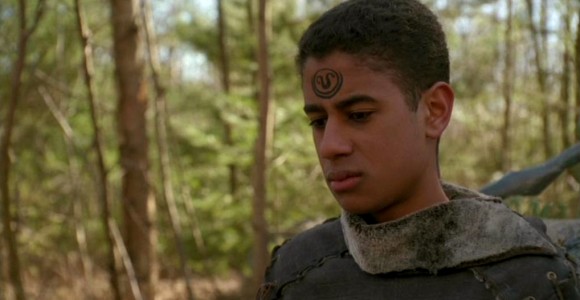 Tragedy reunites Teal'c with his son, who blames him for the death of his mother. O'Neill and Carter launch a risky plan with untested technology when Earth comes under attack by the Goa'uld.

Three months after his arrival on the planet Earth, Jonas Quinn remains patient – though he is growing restless. He's been confined to the S.G.C., and has spent his time studying (and memorizing) nearly all of Dr. Daniel Jackson's library, becoming versed in everything from ancient Earth cultures to the Goa'uld.

In fact, he's taken up Daniel's quest to fight the evil Goa'uld and free the galaxy from enslavement. He does so not only for the protection of his own world, Kelowna, but because he feels the need to atone for what happened to Jackson ("Meridian").

Though Teal'c sympathizes with his fellow alien, Colonel Jack O'Neill and Major Samantha Carter don't want Jonas on SG-1. O'Neill even argues that his team doesn't need a replacement – but General Hammond believes that Dr. Jackson provided a unique perspective that they should try to replace. So far, nine potential replacements have failed to meet the demands of the base's flagship unit.

Teal'c's mentor Bra'tac arrives through the Stargate, bringing word that Teal'c's wife Drey'auc is near death. She has refused to take a new larval Goa'uld symbiote, and now has no functioning immune system. Teal'c and Bra'tac rush to the Jaffa rebel camp on another planet.

Soon after he leaves, the base Stargate receives an incoming wormhole – but no one comes through. Inexplicably, the wormhole does not terminate ... and even passes the 38 minute maximum limit that a wormhole can be maintained. Carter soon discovers the cause: Earth is under attack. Someone is sending small amounts of radiation through the gate, which is collecting within the device's power reserves.

Within a few days, the gate will explode with enough destructive power to wipe out Colorado. The resulting fall-out will destroy all life on Earth.

With no way to escape through the gate or contact their advanced allies, the S.G.C. can find only one solution. SG-1 and Jonas Quinn visit the Area 51 research facility in Nevada, where the X-302 has recently been completed and is nearly ready for test flights. The advanced ship is the first human-made ship capable of interstellar space travel, with many of its systems developed by retro-engineering Goa'uld technology. The ship uses the powerful element naquadria – which Jonas delivered to Earth when he defected – to create a hyperspace window.

The ship will be Earth's last chance for survival. O'Neill and Carter must pilot the craft and successfully enter hyperspace, where they'll head for Abydos – the closest planet with a Stargate. From there, they can contact the powerful Asgard and ask for help.

The X-302 is a success, up until Carter and O'Neill attempt to enter hyperspace. The hyperspace window is unstable, and the ship automatically aborts. The mission is a failure.

Meanwhile, Teal'c arrives to learn that Drey'auc is dead. His son Rya'c, now a young man, blames his father for her death and attacks him. He tells Teal'c that he has given false hope to countless Jaffa – that the Goa'uld cannot be defeated. Teal'c takes a beating from his son, refusing to fight back. Bra'tac stops Rya'c, telling him that the fight against the Goa'uld is a just one, regardless of whether or not it is winnable.

As Teal'c mourns the passing of his wife, he is able to reconcile with Rya'c. Since being brainwashed by Apophis more than three years ago ("Family"), the boy has believed that his mind was weak – and so was he. Teal'c tells him of his own brainwashing at the hands of Apophis ("Enemies"), and that he has never lost his trust in his son.

A fellow Jaffa and friend of Teal'c arrives with news of the attack on Earth. It is the powerful Goa'uld System Lord Anubis, who has a device that can use one Stargate to destroy another. The Jaffa prepare to go into battle to save Earth, if Bra'tac can discern the origin of Anubis' attack.

As the S.G.C. is left with zero options, Anubis appears before them using Asgard holographic technology – stolen from the mind of Thor ("Revelations"). Earth, he tells them, is about to meet its final doom.