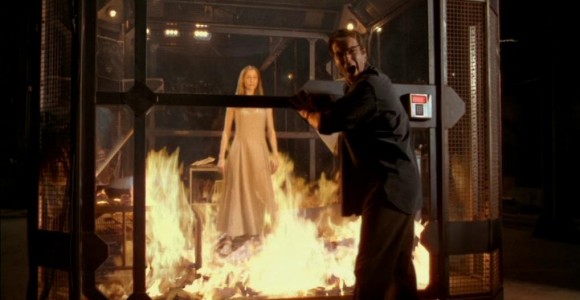 SG-1 investigates a secret N.I.D. laboratory, where a ruthless scientist has used cloning technology to create a Goa'uld-human hybrid.

There are some types of stories in the Stargate universe that tend to drop on the love 'em or hate 'em side of the fence. For some it's the Unas episodes, for others it's the Jaffa. And for some it's the N.I.D. The trouble with the N.I.D. is that their story has a habit of straying too far from the basic premise of Stargate and crossing into other territory, most obviously that of The X-Files.

However you view the N.I.D., they do add a twist to the show, diffusing the lines of demarcation between "us" and "them." "They" -- an enemy -- are not just out there in the form of the Goa'uld; they're here on Earth, and could be anyone. The rogue N.I.D. are bad people who need to be stopped.

"Resurrection" brings the issue of good and bad, or moral judgement, of ends and means, into the spotlight once more. The one thing the S.G.C. and the rogue N.I.D. can agree on is that the threat to Earth is real. The way they face that threat is very different, but who's to say one is right and the other is wrong?

With these complexities in mind, we were faced with another rogue N.I.D. experiment gone wrong: a Goa'uld-human hybrid. An innocent-looking young woman, Anna massacred over 30 people before she was contained. How? Well, we're not quite sure, since we didn't see it. But considering the strength of the Goa'uld, and knowing what the Ashrak (Goa'uld assassins) can do, the scenario is not as implausible as it might first appear.

There was one survivor of the massacre. Ignoring his unnecessarily clichéd parentage, Keffler is a fascinating character. At first it seemed that he was putting on the usual bad guy bravado, projecting an air of indifference in the face of interrogation. But it was quickly clear -- he really didn't care. He wasn't just an "ends justify the means" kind of guy, he simply did what he wanted with no qualms. This is the kind of enemy that would be truly frightening, and in comparison, this season's Big Bad -- Anubis -- is shown up once again as laughable.

For those of us who follow more than just the story on-screen, both the writing and the direction were under a little more scrutiny than usual as first-time-writer Michael Shanks and first-time-director Amanda Tapping showcased their extra-curricular skills. The verdict? Pretty darn good, actually.

Directing first. The overall visual impact was impressive. The camera angles and use of space provided interest and, combined with the lighting, set the mood. There was a hint of new-toy-syndrome a couple of times, with a few rather self-conscious shots such as the final scene where the camera pulled away down the corridor rather than concentrate on the human reaction. But overall the direction added to the story rather than detracted from it, with some nice details giving depth and showing confidence.

The writing was an interesting change in pace from the majority of the season, with what seemed like more dialogue than usual. The clever weaving of previous plotlines into the story, such as knowing that Sam is still with Pete, and discussing Shifu, all added to the character depth and brought a greater sense of connection between Daniel and Anna than I would have otherwise expected. Again, there were a few areas of weakness -- the use of a bomb timer ticking down to create tension, something we've surely seen dozens of times before -- but the impact of the tale and the smooth flow of each scene certainly override those small complaints.

I've mentioned previously that it's the episodes that make me think that stick with me. "Resurrection" is one of those, but there was one thing missing -- and it's the first time it's had too much of an impact on me: Jack. Jack's absence was completely plausible and at first I could see no reason for him to be there. But in light of the last few seasons, I think his perspective was needed. Season Six's "Unnatural Selection" saw Jack using one of the human-form Replicators for his own ends; the good of the many outweighed the good of the one. Jack's worldview isn't as clear cut as Daniel's and Sam's, but neither is it as far in the other direction for him to immediately agree with Keffler on the abuse of a Goa'uld.

Restrictions on the use of Richard Dean Anderson's time meant there would be no Jack in this episode, but I would have happily traded his inappropriate humor in "Birthright" for an O'Neill perspective here.