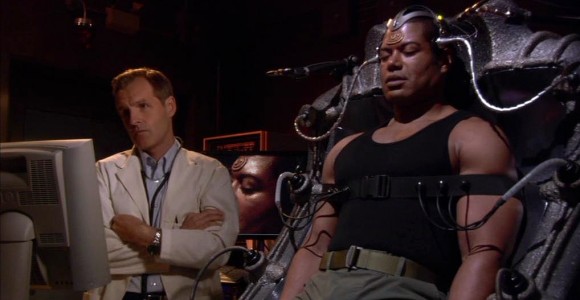 "You can't win the race if someone keeps moving the finish line."
- Daniel Jackson

Sometimes it pays to be a pessimist.

As a Stargate fan since 1999, I almost always look towards the next episode with excitement, eagerness, or at least interest. It's just so much more fun that way; I've never understood fans that groan and grouse over an episode that they haven't actually seen.

But with "Avatar" ... I was skeptical. Seriously skeptical. Don't get me wrong: I love a good Teal'c episode. I think any time our favorite former Jaffa and the new fashion plate of the S.G.C. is able to step out of the wallpaper is a good thing. I was jazzed about "The Changeling," for example, and I was not disappointed.

But the words "video game" in the SCI FI Channel promo for this episode gave me a nervous tic in my left eye. I'm not personally a gamer, and frankly the virtual reality thing has been done and done and done so much -- and rarely done well, in my opinion -- that I wasn't expecting a whole lot from "Avatar."

But that's where it paid to be a pessimist. Because I let the silliness of SCI FI's promotional people to get to me, I was even more impressed with the episode than I might have otherwise been.

What was to like? Although the endless repetition of the video game was reminiscent of "Window of Opportunity" -- albeit a whole lot grislier -- the main arc of the episode was Teal'c's character development, especially his growth since Season Two's "The Gamekeeper." The chair is all but reading his mind, and what it is reading is a lot more complex than Teal'c's stoic façade typically lets on.

What we discover is that Teal'c himself is actually something of a pessimist, while at the same time having an ego to rival Hollywood's most arrogant divas. He sees every skirmish with the Goa'uld and their lackeys as a microcosm of the entire war against them, and although he may have doubts about whether or not they can eventually be beaten, he's willing to give his life in the battle.

The beautiful thing about this episode is that this characterization is revealed through movement, not a lot of slow-paced chit-chat. Although Sam, Daniel, Jack, and Dr. Lee do spend the majority of the time standing around, trying to puzzle out the machinations of the virtual reality chair and the effects of Teal'c's brain on it, it's still in the direct context of the action. We are shown Teal'c's tenacity, his exhaustion, and his breakdown with our own eyes, and the meaning behind it is narrated by the other characters who watch from afar. It's an incredibly effective method.

The two-second delay that ultimately saves Teal'c's bacon is creative. The understanding that Jack -- nor Sam either, if we're being fair -- could enter the game to help Teal'c because of his tactical experience was exceedingly smart thinking. And, of course, Daniel returned to his favorite pastime of getting shot a lot, which always ups the amusement factor for me personally.

Ultimately, "Avatar" is a story about one man's hope, courage and drive to beat a seemingly unstoppable foe. Always, and perhaps especially during the times we're living in now, this is a theme that has the ability to touch our hearts. And the brilliance of the episode is that it was concealed in a pop culture icon, the video game.

For the ultimate in role-playing games, look no further than the S.G.C., it seems. No need for joysticks, plastic guns, or complex key-strokes -- simply plug in and play! As usual, with SG-1, though, the cry of "It seemed like a good idea at the time" will have been echoing through the corridors for days after things went wrong. Again.

What I find most interesting about "Avatar" is the comparison of a learning machine with a learning person. The machine learns, adapts, sacrifices pawns in order to reach its ultimate goal of destroying the S.G.C. The people learn, adapt, forget many of the things they had learned in the past, fail, fail again, and at least one of them gives up. Why, in the final game, does Daniel not shoot both Sam and Jack and worry about it later -- like he certainly knew by Season Five's "Proving Ground?" Why does Teal'c not shoot them when he had already shot Daniel in the same situation?

And why, why, why does the game not have an external fail safe? That was plain daft considering the disaster that was "Avenger 2.0" happened only last year. It is a thin plot device on which to hang the drama, which only makes them all look silly. And really, whose idea was it to have a game that caused physical pain?

With Teal'c effectively playing against himself in the game, it isn't a surprise that he is defeated over and over. The version of him that is pure strategy is surely going to outplay the version of him that has emotions, second thoughts, and ultimately suffers from exhaustion. Having worked on the chairs for two years, it's astonishing that the scientists didn't consider such an outcome. Nor do I believe that the game knows everything in Teal'c's head except the fact that it is just a game.

The niggly details that would have allowed the scenario to work seamlessly aren't there, and the fact that I had time to think about those details while watching came down to one thing: the violence.

The changes Stargate has gone through since it began are many, but I'm not prepared for the show to have changed so far that I have to watch a whole episode about shooting, killing, and blowing stuff up. For those in the gaming community, all the violence is probably nothing new. But this story came from the same people who tried to make a big deal out of Janet dying in last season's "Heroes." Dying is a big deal.

"The Gamekeeper," the pre-cursor to this episode, showed the trauma of death and how it affected those involved. "Avatar" is practically emotionless within the game, with the emphasis on tactics, on defeating an enemy. We have so much of this from the show that having all of this intense violence and blatant death in one hit is too much.

Despite my aversion to them, the fight scenes must have required a considerable amount of work from many people behind the scenes. So congratulations must go to them for the realism. Additionally, the editing achieved a cracking pace through the majority of the game scenes, which is essential to the success of the episode.

The plot itself is overly burdened with exposition, the most obvious example coming right at the beginning of the episode with Teal'c's comment to Sam: "You have previously given me this information." Please, please, please, writers, don't wave a big flag to say, "We're only explaining this for the benefit of the audience!" Perhaps the excessive exposition wouldn't have been so obvious if not for the dramatic difference in pacing between the game scenes and the lab scenes. Although, sticking up for the writers for a moment, it would have taken some very clever writing and exceptional acting to put across all of the information that the audience needed to keep up.

Even Chris Judge's excellent performance here, meeting every challenge thrown at him, wouldn't have been enough for Teal'c's eyebrow to say, "I used to believe the Goa'uld could not be defeated but I might have changed my mind. Possibly."

Again, I loved the way the team works together. I really can't get enough of team togetherness, and this season has definitely ironed out a lot of the issues that were present in Season Seven. Favourite moment? The "I'll do it!" from Jack, Sam, and Daniel, all volunteering to enter the game to help Teal'c.

As to the extended team -- in the game, all are working together to a single goal: defeating the intruders. Outside the game, the impression I'm getting is that the writers really don't like scientists. Have they simply never met a real scientist, engineer, or computer expert? It certainly seems so. Scientists are not all bumbling imbeciles created from some universal template, although from watching the last few seasons of this show you'd be forgiven for thinking they are.

Is "Avatar" a success or failure? Somewhere in between. It certainly shows a concerted effort towards high achievement, but the subject matter isn't really my cup of tea.