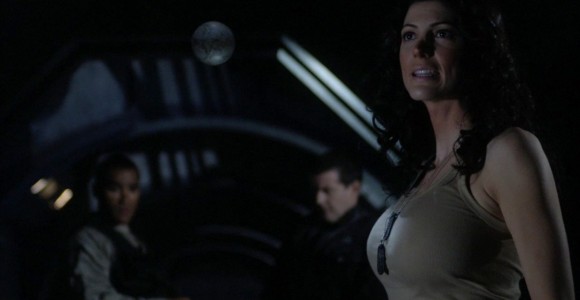 The Destiny suffers a power crisis, putting the lives of the stranded crew in jeopardy when even the emergency reserves run dry. Dr. Rush pushes himself to the breaking point.

Frustrated, Dr. Nicholas Rush throws his notebook onto a control panel. He storms into Destiny's corridor. He ignores Sgt. Hunter Riley's entreaty for help with a project. Finding Lisa Park testing controls on a console, Rush demands she turn it off. Startled, she complies, and Rush leaves.

He ends up in the mess hall where Pvt. Becker is serving rations: an unappealing paste made of water and powder. Colonel Everett Young listens to Adam Brody's report on the 90,000-plus liters of water available. Camille Wray advocates for showers, and Eli Wallace volunteers that the shower facility he has located does not actually use water. Rush's bad-tempered entry prompts Young to dismiss everyone to focus on Rush.

Upset by people turning on various systems, Rush angrily confesses he cannot yet access Destiny's core systems. They're operating on a dwindling supply of reserve power. Still annoyed in spite of Young's agreement to order a halt to exploration, Rush storms out. This time, when Riley asks for assistance in the corridor, a furious Rush slams him against the wall. Before he can unleash a tirade, the lights flicker, distracting him. He releases Riley and continues down the corridor.

Another group enters the mess for their meal and briefing. Young orders Dale Volker to help Rush. Volker protests, but eventually relents. Meanwhile, MSgt. Ronald Greer and Lt. Tamara Johansen go to assist Lt. Matthew Scott in figuring out how to operate the ship's only intact shuttle.

Riley shows Young a device he has rigged to recharge battery-operated devices, and the Colonel orders them to stop until the power issue is resolved. In the control room, Young confronts Dr. Rush. Aware of how hard Rush is working, how he's had no sleep, Young wants Rush to let Volker help.

Eli and Chloe, both with no real purpose aboard, are drawn to one another. Eli, using a kino, has been recording statements from those on board. Chloe decides to try the shower, and Eli shows her where it is. While standing guard Eli is approached by Lt. Vanessa James, who asks for a moment alone. Reluctantly, Eli follows her to the observation deck, where she, Riley, Sgt. Spencer and several others confront Eli. Concerned that no one will give them a straight answer about whether they'll make it home, they believe Eli is on the inside and privy to the answers. Eli swears he knows no more than they do, and promises to share what he knows when he's told.

In the control room, Volker questions how Rush knows Destiny is channeling power to life support when they are locked out of core systems. Rush chastises Volker and orders him out. The scientist returns to Young, convinced that Rush has taken crazy to a new level. Suddenly the lights go out, and the ship drops from F.T.L. flight.

The pair hurry back to the control room, where Rush is the picture of anguish. Destiny has stopped dead in space not because she is near a Stargate, but because she has consumed all of her power reserves. What little is left has been channeled into life support. They move to the gate room, where Rush rails until he simply collapses. Young calls for Lt. Johansen.

Volker, Eli, Brody and Young discuss their situation. Only Eli has any viable ideas. He suggests trying to transfer power from the shuttle to the ship and he has a kino searching the unpressurized areas for an active control console. Instructing the two older scientists to work on the ideas, Young uses the long-range communication stones to contact Earth.

After briefing General O'Neill, Young (in Colonel Telford's body) is escorted to visit his estranged wife, Emily. Still angry with him for deploying to Icarus Base, Emily is dazed by the story that this stranger is really her husband. Everett asks for her understanding and support, swearing that he will do everything he can to make it home – and asking her to wait for him. But she refuses to change her mind about their relationship, telling him that nothing has changed.

Meanwhile, on board Destiny, Telford (in Young's body) demands to see Dr. Rush. When he learns the man had a breakdown, he asks Scott and Johansen how Young let events deteriorate to this point. He orders Scott to request that Young be removed from command. Scott is refusing – even as Young's mind returns to his own body. When Scott shows Young that they have entered a solar system with a gas giant and three (perhaps habitable) planets, Young has Johansen wake Rush.

Rush has been asleep for ten hours. Lt. Johansen blames the lack of sleep, caffeine and nicotine withdrawal for his exaggerated behavior and subsequent collapse. Actually embarrassed, Rush joins the others in the shuttle. He explains Destiny's insertion trajectory and the turbulence they'll experience, and Young and Greer fan out to warn people. (Along the way they encounter Riley and Eli, who have been using a kino to spy on Lt. James in her underwear.)

From the shuttle and the observation deck, people watch the ship move through the gas giant's gravity well. Rush examines the shuttle instruments, searching for the system's planets. What he sees instead horrifies him. Scott shares his dismay as they both realize their course has been altered.

Destiny is headed for the system's sun.