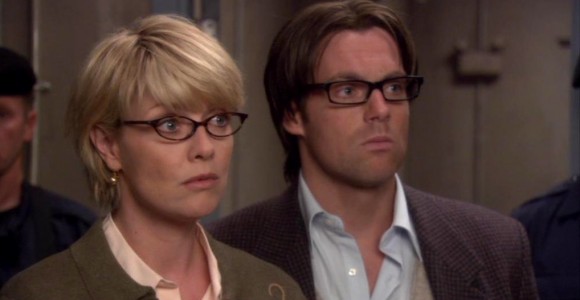 With the timeline changed by SG-1's actions in the distant past, an alternate version of SG-1 must use the newly-discovered time ship to set things right.

Having refused their request to be on the first team through the Stargate, General Hammond escorts altered timeline Samantha Carter and Daniel Jackson to an elevator in Cheyenne Mountain. The door opens to reveal altered timeline, re-commissioned, Colonel Jack O'Neill.

O'Neill has decided to get involved, in part because old friend Charles Kawalsky, is heading the team. Carter and Jackson again make their case for inclusion by showing O'Neill the ship and encouraging his effort to activate it.

Hammond reminds the team, now with Carter and Jackson, that this is a recon trip – no time travel will be permitted. In the ship, Daniel dials their destination. A first kawoosh of the event horizon fills the Gate Room. Carter tells everyone they will be de-molecularized, transmitted over two thousand light years away and rematerialized on the other side. True to his unadventurous self in any timeline, Dr. Rodney McKay is glad not to be going.

Jack flies the ship through the gate, and they emerge over forest and spot a city – Chulak. O'Neill lands in a secluded area. Soon the group heads off on foot. As Daniel and Sam puzzle over military signals, a shock grenade drops in front of them, knocking them all unconscious.

When they awaken in a prison compound, Teal'c, Apophis's first prime, comes to interrogate them. Jackson, missing his glasses, steps forward and reveals that they are Tau'ri. He, O'Neill, Carter and Teal'c constitute a team called SG-1, and that their counterparts have altered the past. When he mentions that the Jaffa are free and that Teal'c doesn't believe Apophis is real god, Teal'c slaps Jackson instead. O'Neill tells him it's all on a tape, which Jackson adds is in his bag. Instead, Teal'c takes the squinting Jackson to Apophis who uses his hand device to torture the earthling for information.

Back in the cell, Carter is forced to point out that in this altered timeline Teal'c may not turn against Apophis. Apophis, who continues to torture Daniel, gets nothing from him with the hand device. He sends Teal'c away and commences other methods for interrogation.

Teal'c goes back to the cell with the camera and tape, both of which have convinced him to help. Jackson is returned, but cautions that Teal'c cannot be trusted. Using C4 from the packs Teal'c gave back, Kawalsky sets a charge allowing them to escape.

O'Neill tries to contact the guards stationed with the Jumper. Teal'c joins up with the group on the move. In a surprise turn of events he shoots Jackson, revealing that Daniel is now a Goa'uld, spying for Apophis. The serpent god has dispatched a fleet of Ha'tak vessels to destroy the Tau'ri. As they question Teal'c's veracity, Jackson comes back to life and shoots one of the team. The others shoot him until he dies – his glowing eyes dimming.

Attacked by Jaffa, O'Neill lifts off the ship with only Teal'c and Carter aboard. With the gate guarded and under fire from death gliders, Carter suggests escape by traveling back 5000 years. O'Neill concentrates, and the ship is translated through time. Soon, the Jumper emerges from the Stargate back on Earth, but in ancient Egypt.

Deciding to attempt a fix of the timeline, Jack, Sam and Teal'c go to a village and are greeted by Katep who speaks English and knows who they are. He says they were there five years ago and fermented an uprising that resulted in the execution of SG-1's Teal'c, Carter and O'Neill.

SG-1 Daniel arrives. He explains that the original SG-1 was trapped because O'Neill and Teal'c couldn't do anything. Altered timeline Carter tells Daniel that SG-1's plan was a success: the tape, the Zero Point Module and a tablet were buried in Giza where the Stargate taken by Ra had been.

When a Jaffa patrol arrives, Daniel takes the new arrivals to a secret cash of weapons he and Katep have amassed. To keep the Stargate from Ra, they decide to steal it and hide it. Daniel tells them about the cloaking device.

Carter and O'Neill go to the ship to test the invisibility cloak. Meanwhile, alternate reality Teal'c advises Jackson on his plan. Daniel is reluctant to trust Teal'c because he knows the plan works, but Teal'c says they need another plan to keep Ra from departing Earth with the gate – the problem that started it all.

In the Jumper alternate O'Neill dares to share his personal feelings for alternate Carter. She is surprised, explaining that he is not the sort of man she usually attracts. In a surprise to O'Neill, she says she actually likes Daniel. O'Neill is incredulous and infers his first impression of Daniel – Jack thinks he's gay.

As Carter reroutes power, a Jaffa patrol approaches. O'Neill makes the ship invisible, but cannot maintain the cloak. The Jaffa attack, prompting Daniel and Teal'c to begin the rebellion. While Daniel and alternate Teal'c amass the Egyptian forces to assault the Jaffa around the Jumper, alternate O'Neill and Carter share an intimate moment inside.

In the restored future, SG-1 views the tape retrieved from Egypt. In it, Jack confesses there are no fish in his pond. Carter declares that nothing they did affected the timeline. Everything has been restored. They do not have to go into the past after all – because they somehow did already – and left the tape (and moved Z.P.M.) where future archaeologists could find them.

As scheduled, SG-1 goes to O'Neill's cabin instead. (In a reprise of the final scene from "Threads") Teal'c and Daniel join Carter and O'Neill pond-side. Only this time, a fish leaps from the water. O'Neill turns to Carter: "Close enough," he says.