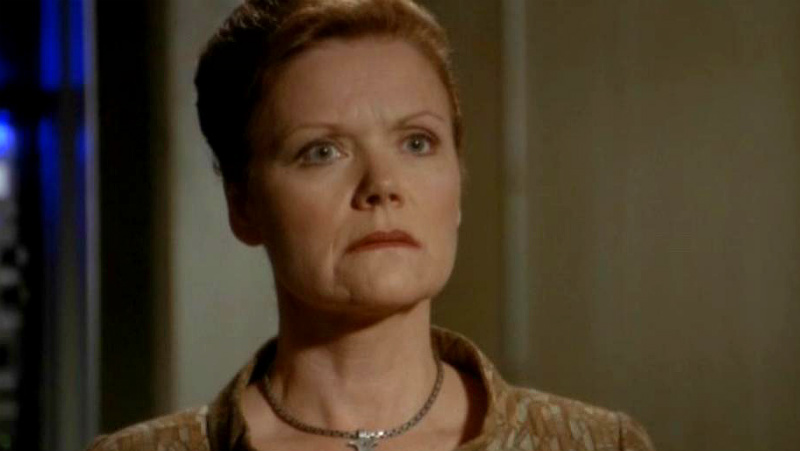 Interested in securing Kelowna from dangers foreign and domestic, Dreylock is loyal to her people and strongly opposed to any actions taken against their interests -- including stealing valuable minerals and defecting to another world, as Jonas Quinn did. She is not beyond understanding, however.

As Kelowna's ambassador to other nations and planets, Dreylock represented the right hand of the First Minister, Velis. She traveled to Earth with Commander Hale and Dr. Kieran, in the hopes of securing Earth technology to aid in their conflict with rival nations. Shortly after Velis was killed by Anubis's occupying forces Dreylock welcomed Jonas back home, and became Kelowna's First Minister.

Since the forming of the planet Langara's Joint Ruling Council (including Kelowna and neighboring nations Terrania and the Andari Federation) in the wake of the Goa'uld attack, Dreylock has become more concerned with helping to unify her world than to opposing Kelowna's former enemies.

Shadow Play - Dreylock arrives on Earth to assist in conducting negotiations for weapons and technology to defend against Kelowna's hostile neighbors.
Homecoming - Dreylock assists the Tau'ri in defending Kelowna from attack by Anubis, and welcomes Jonas home to the negotiating table when a tenuous peace is established with Terrania and the Andari Federation.
Fallout - Dreylock is promoted to First Minister following the death of Velis, and travels to Earth with other Langaran representatives to find a way to save their people from the planet's impending doom.