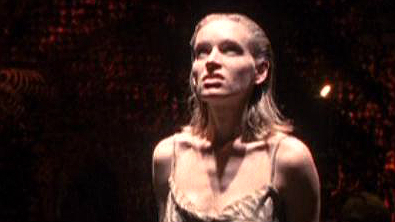 A member of the Tok'ra resistance movement, Jolinar was forced to take refuge in Samantha Carter in order to survive, and to hide out from a Goa'uld assassin sent to kill her. When the Ashrak followed her to Earth, Jolinar sacrificed her life to save Captain Carter. The symbiote was gradually absorbed into Carter's body, leaving her with remarkable memories and abilities.

Jolinar's host was, for some time, the beautiful Rosha. Rosha / Jolinar shared an intimate relationship with the Tok'ra Martouf / Lantash for more than 100 years. She once tried to overthrow a Goa'uld System Lord, but was forced to flee when Apophis and Ra joined in the battle against her forces.

Sokar once successfully captured Jolinar, and spent a great deal of time torturing her with a pain stick while she was imprisoned on the hellish moon Ne'tu. This injured her physically and emotionally, and she was never quite the same. But Sokar's appointed ruler, Bynarr, took pity on Jolinar and she took this as an opportunity to escape. Seducing Bynarr, she stole the key to the transport rings while he slept and successfully escaped to the nearby planet Delmak, where she located transport out of the system. Ashamed of what she had done, she never told Martouf the truth and hardly spoke of her time on Ne'tu.

While evading an Ashrak Goa'uld assassin, Jolinar had to abandon the body of Rosha. (Rosha's final fate remains unknown.) She reached the world of Nassya, where she hid within a Nassyan man. During a Goa'uld bombardment of the settlement, SG-1 arrived to evacuate the colony. After the man had sustained incurable injuries, Samantha Carter began giving him mouth-to-mouth. Jolinar realized this was an opportunity to escape and entered her body through the throat, escaping back to Earth.

It wasn't long before she was discovered, and, despite pleading with the S.G.C., was unable to convince them she was not a Goa'uld -- not philosophically, at any rate. She was the first Tok'ra ever encountered by the S.G.C. (though Teal'c was aware of the movement's existence). After the Ashrak tracked her down to a security cell, Jolinar was allowed final words of freedom for the Tok'ra movement before she was executed with an Ashrak ring device.

Jolinar gave every ounce of her remaining energy to maintain the body of Samantha Carter, who was saved from death. Jolinar had given her life for Sam, and she was forever changed, later encountering Martouf and feeling echoes of everything Jolinar had felt for him. Fragments of Jolinar's memories now live on, buried inside of Carter. Jolinar also left behind a protein marker, and naquadah in Sam's bloodstream -- allowing her to use Goa'uld technology (such as hand and healing devices), and sense the presence of a nearby symbiote.

PLAYED BY - Amanda Tapping,Tanya Reid
FIRST APPEARED - In the Line of Duty

In the Line of Duty - Jolinar is forced to blend with an unwilling Sam Carter to avoid capture by an Ashrak bent on finding and destroying her. She later dies with Captain Carter, at the hands of the Ashrak.
The Tok'ra, Part 1 - Carter uses her memories of Jolinar to locate the last known whereabouts of the Tok'ra before they move on, and meets Martouf, Jolinar's former mate.
Jolinar's Memories - Carter's memories of Jolinar resurface and guide them through the hellish moon of Ne'tu, from which she once escaped by engaging in an intimate relationship with the local Goa'uld warden, Bynarr.
The Devil You Know - Apophis uses a drug to force Martouf to believe that Carter is Jolinar, threatening to kill his former mate if he did not reveal the Tok'ra's secret location.