In the Line of Duty 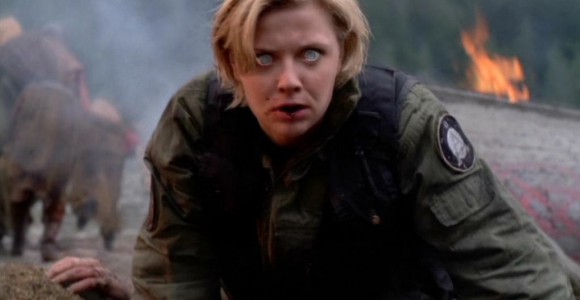 Carter is possessed by a Goa'uld who claims to be an enemy of the System Lords – Jolinar of Malkshur, who is being hunted by an assassin that has followed her to Earth.

As SG-1 helps a group of people on the planet Nassya flee through the Stargate from a Goa'uld attack on their world, Captain Carter stops to give CPR to a fallen villager. He suddenly grabs her head, a something enters her. Blood on her lip, Carter's eyes glow. She has been possessed by a Goa'uld symbiote.

Carter returns through the gate and tries to act as normal as possible, though through the mission debriefing her comrades notice something is different about her. Finally, she goes to visit Cassandra ("Singularity"), and the young girl senses that Carter has been taken by a Goa'uld. She locks herself into Dr. Fraiser's office and demands to see Colonel O'Neill.

Meanwhile, one of the badly burned refugees assaults his doctor, and emerges from his bandages fully recovered. He is an Ashrak, a Goa'uld-hired assassin.

Cassandra convinces O'Neill that Carter was infected, and he takes action. Carter is apprehended and put behind bars at the S.G.C. The Goa'uld reveals itself to be Jolinar of Malkshur, and demands release. The parasite even promises to return Carter to them, fully restored to who she was. O'Neill does not budge.

Finally, Jolinar reveals that she is a member of the Tok'ra, a group of rebel Goa'uld who oppose the System Lords and seek power for good. Teal'c, at least, is convinced.

When the Ashrak finally locates his victim, Jolinar, Carter suffers torture and almost death at his hands. The hunter is found, and Teal'c finally puts him down with two shots from a zat gun.

Meanwhile, Carter is fighting for life in the infirmary. When she recovers, she tells O'Neill that Jolinar has given its life to save hers.