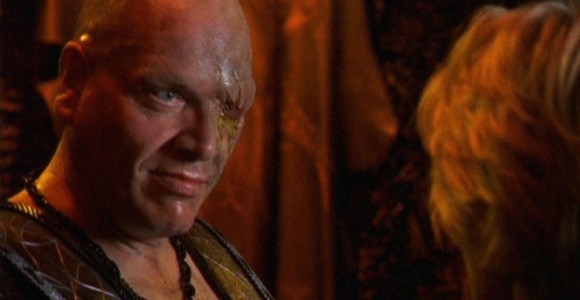 When Major Carter's father Jacob is kidnapped by Sokar, the SG-1 team must infiltrate a prison moon designed to look like hell to rescue him.

The Tok'ra operative Martouf arrives through the Stargate with an urgent request for SG-1: Jacob Carter / Selmak has been taken captive by Sokar – a powerful, rogue Goa'uld who impersonates Satan. Sokar is holding Major Carter's father on Ne'tu, a moon of his home planet. Sokar has simulated the conditions of hell on the prison moon by exposing the molten core.

This mission is of the utmost importance, not only because of Jacob Carter, but also because of what he knows. The Tok'ra have learned that Sokar is planning a major offensive to overthrow the feudal System Lords, from whom he has been outcast, and tip the balance of power in the galaxy. SG-1 must find Jacob to find out what he has discovered about Sokar's attack plans, and relay the information back to the Tok'ra.

With authorization from General Hammond, the team – Colonel O'Neill, Major Carter, Daniel Jackson, and Teal'c – join Martouf in infiltrating the prison (with Teal'c piloting a Goa'uld cargo transport vessel into orbit) and locating Jacob. To learn how they might escape, they must rely on the memories of Jolinar – the Tok'ra who once possessed Major Carter, and the only one ever to escape from Ne'tu. Aided by the Tok'ra memory device ("Out of Mind"), Carter must discover Jolinar's hidden past.

Along with Martouf, the team gates to the planet Vorash, where they board the same transport vessel stolen by Jolinar when she escaped Ne'tu years ago. Though badly damaged, the ship can take them to the moon (which has no Stargate). It is equipped with descent pods that allow O'Neill, Martouf, Jackson, and Carter to the moon's surface, while Teal'c pilots the ship in orbit.

While en route, Sam uses the Tok'ra memory device to try and remember Jolinar's experiences on Ne'tu. The process is physically and emotionally trying, but she learns of the terrible torture that Jolinar underwent at the hands of Sokar. She is hesitant to describe it to Martouf, who was Jolinar's beloved mate before her death. But he presses her, telling her that he knows Jolinar kept much of her experience in the hellish prison from him, and that it is important that Samantha not do the same.

The team arrives in orbit and takes the ship's descent pods to the planet's surface, just as prisoners would, so that they may blend in. Martouf encourages SG-1 to leave their weapons behind, but O'Neill refuses to go down unarmed. Teal'c will stay with the ship, and Sam will continue to wear the memory device and use it on a low setting so that she can continue to work through Jolinar's memories as they go.

Once on Ne'tu, Sam begins to recall more and more about how Jolinar escaped. She recalls a relationship that Jolinar had with the warden, Bynarr, and asks to see him. Sam recalls that after being horribly tortured, Jolinar escaped by becoming sexually involved with Bynarr and betraying him. She learned that there are transport rings hidden in his chamber, activated by a medallion he wears around his neck. The rings allow Bynarr to travel to the nearby planet Delmak, where he gives regular reports to his master Sokar – who enjoys hearing of the suffering of the damned. There Jolinar stole the cargo ship and escaped.

On one such trip, Bynarr thanks Sokar for sending the former host of Jolinar to him, so that he may take revenge. Sokar tells him that he did not send her; she and her team are intruders, and must be dealt with.

Bynarr initially hopes that he may learn where to find Jolinar. But when he discovers she is dead, he wishes to find some comfort in taking his revenge out on Sam, knowing that she once carried Jolinar.

They also encounter Na'onak, Bynarr's mysterious, hooded First Prime. Bynarr possesses the only staff weapon on Ne'tu, and confronts SG-1. Jack's hand is forced and he draws his weapon on the imposing denizens, but it isn't enough. They are subdued and thrown into a holding cell.

There they find the wounded and tortured Jacob Carter, Sam's father. He is not well, and needs immediate medical attention. But Jacob relays to Martouf the information he learned about Sokar's plan of attack: he is even more powerful than the Tok'ra had believed, and is poised to launch a massive attack on the System Lords in a matter of days. With his strength, he will win. Martouf relays the information to Teal'c, who must evade Sokar's attacking ships and take the information to the Tok'ra High Council immediately.

Before Bynarr can take his revenge on Carter, he is shot in the back. His assailant is none other than Na'onak. He promptly orders Carter returned to the holding cell, where she tells the others what happened. The denizens will riot.

The team packs loose rocks into a steam vent, using the pressure build-up to blow open their cell door. As SG-1, Martouf, and Jacob move to escape the moon by using the ring transporter Sam now knows is hidden in Bynarr's chamber, they are stopped by Na'onak. They cannot activate the rings quickly enough, and the villain bursts into the room, flanked by some of the prisoners. Na'onak is now in charge, and he reveals his true face to them.

He is Apophis, the team's greatest enemy, once thought dead but now alive again.