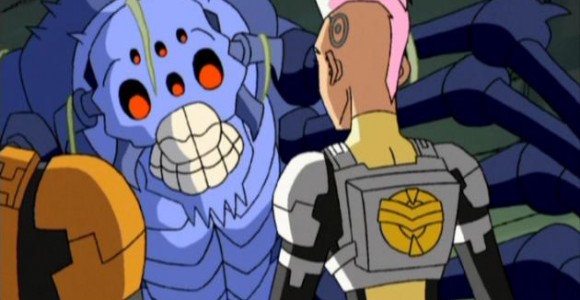 Stacey must face her personal fears when she must stand trial for attacking a spider-like alien life form.

The Stargate team step through to a planet with inhabitants who are giant, spider-like creatures, where Stacey is forced confront her fear of spiders. During their recon mission, Ec'co gives her advice that it’s OK to feel fear as long as you don’t let it control you. Once you admit you’re afraid, you can control the fear. Ec'co admits that his biggest own fear is anger -- and that can easily take control of you too.

While Ec'co goes to collect rock samples for study, Stacey explores the area and is accidentally entangled into one of the spider people’s web traps. Feeling threatened, she makes the quick decision (in what she later argues was self-defense) to attack one of the inhabitants that was approaching her.

During his own solo flight recon, Harrison is attacked by giant flies and is also being watched by the spider creatures. The rest of the team encounters them too, but find out they are friendly and there is no need to fear them. After hearing Stacey’s cries of distress, the team finds her and help to free her, but the spider people are appalled by her having attacked one of their kind. They accuse her of lying in saying that she was being attacked.

As a skirmish is about to break out Seattle, Gus, and Draga arrive in time to break it up. They attempt to clear up this misunderstanding, emphasizing to the locals that they come in peace. Their representative says that they are convinced at the team's good intentions ... but, nevertheless, Stacey has badly injured Naotsiti. Draga attempts to heal him, but is unsuccessful -- since the spiders have such a different physiology from humanoids. As Gus tries to apologies on Stacey’s behalf, she continues to argue that she was justified in defending herself from what she believed was an attack.

The representative accepts the apology and understands that Stacey was acting out of fear -- something she stubbornly continues to deny.

They learn that the only way to heal Naotsiti is to take him to Kang’swuti, the mother of the Spider people. Meanwhile the team is informed that Stacey will be put on trial before Kang’swuti -- and only she can decide the consequences for this action. While the team is resistant to one of their own being put on trial in an alien court, Ec'co reminds them that the first thing they were taught at Stargate Academy was to respect local customs.

Gus tells Stacey that they could attempt to escape through the Stargate instead of facing the alien court. But she continues to say that she is not afraid of the situation -- refusing to run away since, in her mind, she has done nothing wrong.

As they arrive to the Spider village, they find out that many come to this world to trade for their silk, which is stronger than steel. Meanwhile it is revealed that the Tlak’kan have arrived. Stacey is brought before Kang’swuti who tells the team that if Naotsiti doesn’t regain his life force, justice must be done -- and that there must be punishment if Stacey doesn’t acknowledge her crime.

During a sudden Tlak’kahn attack, the recovering Naotsiki saves Stacey from an attacking fighter. She is grateful, and begins to realize that these spider people may not be so bad after all. Naotsiki explains that he was also trying to help her earlier, in order to free her from his web. She thanks him for the help. Before Stacey jumps into action to help her team, Naotsiki reminds her that she is reacting out of anger, and that they must take the time to think of a plan before acting.

During the fight with the Tlak’kahn, the spiders successfully use their strong webs to stop the invading forces.

Before leaving Stacey chooses to stand trial, and finally admits that she was wrong to attack Naotsiti when he was only trying to help. She finally admits to her irrational fear of spiders, and that she let her fear think for her instead of thinking for herself. She is ready to face punishment. But instead of punishing her, Nao’swuti tells Stacey that her healing has finally begun and she is free to go in peace. The team then gather, and leave the planet for their next destination.