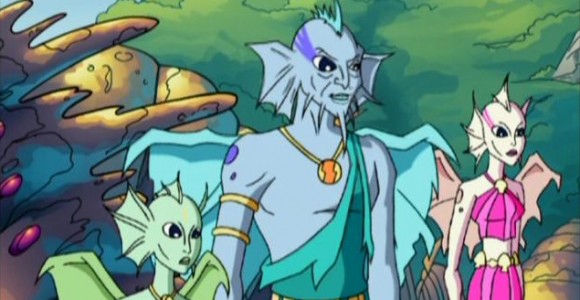 The team arrives on a water planet, trapped at the Stargate, surrounded by strong tides. Stacey gets pulled into the ocean by a strong tidal wave, causing her and her R.A.T.V to sink into the depth’s bellow. Luckily with quick action Harrison dives in to rescue her, leaving the R.A.T.V trapped at the bottom of the ocean.

Being the young cocky soldier that he is, Harrison can’t help but brag about his swimming skills and that the rescue was nothing, a recurring theme throughout this adventure as Harrison shows off how much of a hot head he can be.

Meanwhile on the Tlak'kahn home world, Da’kyll informs his leader Hah’lak that he has lost track of the Ancient and Gus Bonner’s team, but that he will continue the hunt to find them. Da’kyll seems suspicious of Hah’lak who reassures him he has full confidence that he will accomplish his mission, unaware that Pahk’khal is also hunting the team. Pah’khal later reveals that his team of bounty hunters, Kral and Gagor, know the Stargate team’s whereabouts and they are hired by Hah’lak to capture them.

Back on the water planet, Harrison continues to show off and bragging that he’s able to swim down to the depths of the sunken R.A.T.V, refusing any help to hookup the reel cable because he’s a champion swimmer.

While Seattle, Draga and Ec’co are out collecting material to build a raft, Draga and Seattle display telepathic abilities and sense that they are in danger, but are ambushed by some kind of sea creatures. The rest of the team are also captured at the Stargate but they are immediately set free and the team is reunited on the main land where they are introduced to the Tsurai.

One of the Tsurai, Sargal apologizes for their hasty actions as they are always more cautious when ‘Landers’ arrive on their world as they would often come to this world to loot. In this case, it’s implied he is talking about the Tlak’kahn. They do however try to keep peace with most landers and trade for supplies and medicine. Harrison quickly gets attracted to Tulana, one of the female Tsurai and can’t help but to flirt with her, continuously bragging obnoxiously about himself and his swimming accomplishments.

It is then revealed during the night that Sargal trades in secret with the Tlak’kahn and they attempt to bribe him to help them capture Drag.

The next morning, the team manages to fish the RTV out of the water with the help of the Tsurai. To Sargal’s disapproval, Tulana and Harrison continue to develop a closer bond despite Harrison still trying to show off. Because of his disapproval, Sargal decides to help the Tlak'kahn capture Draga, revealing that Seattle and Draga share a mental bond with each other which they could use to their advantage.

Later that evening, Harrison is challenged by Sargal to a traditional, but dangerous swimming event in the Katanda caves to which he accepts. Seattle goes missing, which lures Draga strait into the Tlak'kahn trap and after a chase to the Stargate, Draga and Seattle are eventually rescued.

After being rescued by Harrison from a hostile Shilluk sea creature during the race, Sargal shows a new found respect for Harrison and hopes their people can continue being allies. Harrison also apologizes for all the bragging causing so much trouble, and the reunited team packs up and heads to a new world.