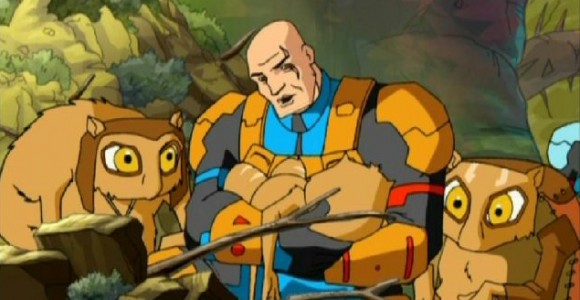 The team must protect the maturing alien crysalis from the Tlak'kahn. But when they discover a world plagued by an unknown disease, Major Bonner refuses to leave.

Gus and the team arrive through the Stargate on another world and attempt to gate back to Earth without success. Gus activates his G.D.O code, but detects that the iris will not open suggesting the codes must have been changed.

He decides to dial coordinates to another world warning that this planet isn't safe and that staying one step ahead of the Tlak'kahn is the best way to survive. A giant, squirrel-like creature suddenly jumps from a tree and grabs the alien chrysalis and Harrison. As it runs off, the others engage the creature with no success in immobilizing it. Harrison and the chrysalis are stored as food up in the creatures nest. Realizing this, Gus grabs the jet pack and goes after him.

In the meantime, Harrison attempts an escape with the chrysalis. As the creature moves to stop him, Harrison gets tangled up in vines which snap, sending him plunging to an apparent death. As Bonner swoops up and grabs him they succeed in alluding the creature, but they lose control of the jet pack.

Harrison falls onto a village home causing it to crumble into a pile of rubble. Creatures known as the Thorn arrive at the scene and begin to clear out the mess. They save a young sick Thorn who was resting inside. Stacey, Ec'co, and Seattle join them. Concerned about the chrysalis, Ec'co finds it undamaged in the rubble.

Gus explains that a sickness has spread throughout the entire village and blames himself -- since it began shortly after he and his former SG team arrived there.

Back on Earth, Nephestis secretly contacts the Tlak'kahn requesting that Gus Bonner and his team be eliminated in order to maintain his cover. Da'Kyll accepts the challenge.

Back on the Thorn home world, Gus attends to one of the sick and later joins the rest of the team who are worried that the Tlak'kahn may come through the Stargate any minute. They argue that they must get a move on to protect the chrysalis, but Gus and Seattle insist on remaining on the planet to help out the Thorn. Stacey, Ec'co, and Harrison choose to go through the Stargate anyway.

Once at the Stargate, Tlak'kahn forces come through. The trio is overpowered, but Harrison manages to retreat back to the village and inform Gus and Seattle about their situation. Back at the Stargate, the chrysalis hatches and a winged humanoid creature flies out. As the Tlak'kahn are distracted by the creature, Ec'co and Stacey take the opportunity to escape. Gus and Seattle arrive for the rescue.

Da'Kyll later arrives at the village threatening to destroy it if Gus doesn't surrender himself along with the Ancient and the rest of his team. Gus decides to surrender only himself to the Tlak'kahn and orders the others to head to the Stargate. As Gus is taken prisoner by the Tlak'kahn, the Ancient suddenly swoops down from a tree and uses her powers to disarm them. The rest of the team arrives and the Thorn also join in the battle to overpower their common enemy.

As the Tlak'kahn forces retreat, Da'Kyll has his own encounter with the giant squirrel creature. The Ancient later joins the others and uses her powers to heal the entire village. She decides to join the team on their next mission, and many more to come.