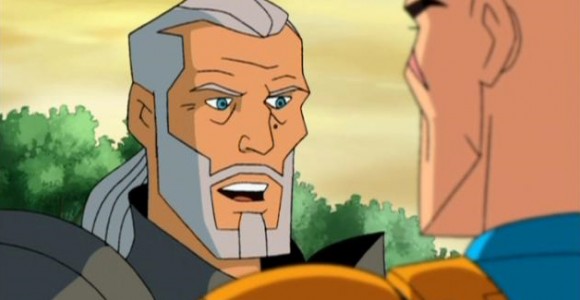 Gus discovers his former commanding officer living on an alien world – as the exalted leader of the indigenous people.

Gus and his team arrive on a planet just in time to rescue humanoid inhabitants from an ambush. The ones responsible for the ambush run away but one is captured by city troops. They try to capture Stacey who helped the one that escaped when the rest of the team arrives to back her up.

As they are about to engage in battle, Gus's old friend Harley Sheppard shows up to stop the fight. He was an old team leader of his during his first missions before Gus was transferred to another team for continuously disobeying his orders. It turns out he "retired" on this world without informing Stargate Command when he was reported missing in action.

Sheppard introduces them to the Mustari, the humanoid inhabitants of this world. Apparently a rebel named Tamaz has been causing some disturbance lately. Sheppard claims they are just bandits that would rather steal food and hide in the woods instead of work for a living. To change the subject, Sheppard invites the team over for dinner.

When they arrive at the village, the people bow down to Sheppard. Sheppard claims it's simply a local custom and that the Mustari are grateful for his help in getting them out of poverty and starvation by introducing them to our ways from agriculture to medicine.

When they arrive at his house, they are baffled to see it is a huge castle. Rebel Bandits attempt to kill Sheppard by dropping a pile of stones on him, but Draga stops the stones with her telekinetic ability. Harrison goes after the bandits but is stopped by Stacey who claims she knows what they might be rebelling against.

Stacey confronts Sheppard and asks why those people are rebelling against him, but he quickly changes the subject again admiring an enormous marble statue of himself. He claims that everyone needs heroes and that Stargate Command should have built statues for both him and Gus after some of the things they have been through.

Later during the feast Stacey asks a servant who this rebel Tamaz is to the objections of one of the leaders. Gus and Sheppard exchange tails of humorous events that occurred during some of their old missions.

As the team gets ready for bed, Gus contemplates on what he should do. Meanwhile, Sheppard goes to greet Tlak'kahn forces who step through the Stargate. Da'Kyll double crosses Sheppard by changing the deal they made and goes after Gus and the Ancient. Gus wakes up Harrison and says he wants to talk to the bandits to find out what they're really rebelling about.

At the Stargate, Gus and Sheppard admit the error of their ways. Sheppard has the Stargate activated and gives his last order as former ruler to the Mustari; to work together and make their own decisions from now on.