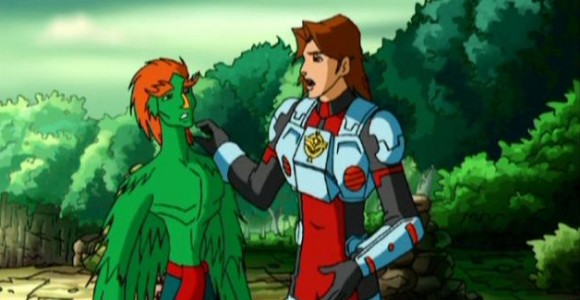 Gus Bonner and the team gate to a paradise island known as M'Riana. They find themselves at the top of an active volcano. An earthquake starts which plunges Harrison down a streaming waterfall.

As Harrison attempts to fight the current of the river, the rest of the team sets out to search for him. Down the stream, he is rescued by a Makua by the name of A'Abay. The Makua explains that he is going through a ritual known as Kamanu where he must prove his courage to the other members of his culture, a kind of initiation which all Makua must undergo once in their life.

As the rest of the team continue their search for Harrison, they find his damaged rocket pack at the bottom of the river and fear the worst, Draga however senses that he is still alive. Meanwhile, Ec'co detects from his computer readings that the seismic activity and the pressure build up within the volcano, indicates that it will literally explode, not erupt, which will destroy everything on the island.

Meanwhile, A'Abay and Harrison climb the mountain to get back to the Stargate and at the same time, allow A'Abay to complete his Kamanu. Even with Harrison's objections to the initiation, A'Abay insists on accomplishing his task without Harrison's help, since help is forbidden for this test no matter what the risks.

Meanwhile, Gus Bonner orders Stacy and Seattle to find the islanders to warn them about the disaster, while he, Draga and Ec'co continue their search for Harrison.

As A'Abay continues his Kamanu with Harrison by his side, Harrison explains to him that proving one's courage is not done through various tasks of some initiation. He also takes the time to point out that the earthquakes may be caused by the instability of the volcano. He insists that they should go warn the islanders, but A'Abay is persistent in completing his final task of Kamanu in which he must steal an egg, unarmed, from a Halaka's cave, a fierce creature on this world.

During the last task of Kamanu, Harrison becomes cornered by the Halaka and A'Abay shows his true courage by giving the egg back to the creature, in order to get Harrison out of a tough situation.

As pressure rapidly builds up within the volcano, Stacey and Seattle finally find the village. They also find Harrison there who arrives with A'Abay. The rest of the Makua are not pleased with A'Abay for not accomplishing his Kamanu, but an elder of the village convinces the others that they must change their ways and that no matter how afraid they may be of change, they must move to another island to assure their survival.

Gus Bonner and the team succeed in going through the Stargate just in time as the Makua watch the destruction of their ancestor's home and prepare to face the unknown future that awaits them.