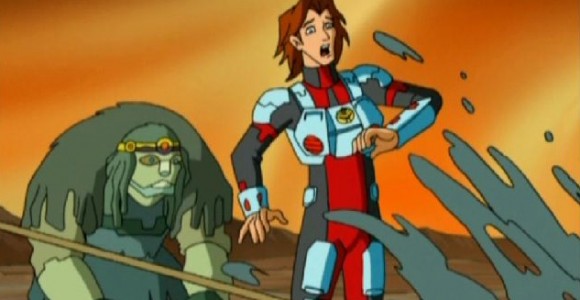 The team travels to a world populated by mud creatures in an attempt to avoid the Tlak'kahn, but find themselves in another battle for survival.

The team arrives on a mud world where they are greeted by creatures known as the Mou'a'dash who remember Gus Bonner from his last visit. Draga is drawn to an Ancient stone known as the Guide on the top of a nearby hill. The locals believe it to be some sort of Oracle. As Draga touches it, the stone lights up. A sudden earthquake causes the stone to tip over nearly falling into a bubbling mud pit.

As Harrison helps the locals get the stone back up, he slips and falls over the edge into the thick mud pit. The rest of the team and one of the locals, a female known as Baguin, come to his rescue and pull him out. Baguin says that she now "owns" Harrison. It is their local custom that makes it so the one who is rescued ends up "owned" by their rescuer.

Ec'co takes a sample of rock from the stone and, upon analysis, determines that it is made of Naquadah, the same element the Stargates are made of. Draga mentions that when she touched the stone, she felt like she is the only one who can touch it and felt hope and yearning. Gus orders the team to grab their gear to help get the stone back up.

Meanwhile on planet Tlak'kahn, Da'Kyll is informed by Pahk'Kal that they have obtained the coordinates of every planet visited by Gus Bonner thanks to their spy on Earth. Da'Kyll makes it Pahk'Kal's personal mission to send search teams to every one of those planets to capture Gus Bonner and the Ancient.

When the team arrives at the village, Harrison has trouble adjusting to the local customs. As the locals begin preparations for a feast, the Tlak'kahn arrive through the Stargate and begin their search for Bonner and the Ancient.

Harrison and the others fight off the Tlak'kahn and manage to elude capture. Since Harrison saved Baguin, she breaks her ownership of him. A happy Harrison, Stacey and Ec'co head back to the village, but the Tlak'kahn and their prisoners aren't there so they head for the Stargate.

They arrive back on the Mou'a'dash planet, leaving the Tlak'kahn forces behind. They say goodbye to their new friends and, to his surprise, Harrison finds out that Baguin is in fact a really beautiful girl.

Gus explains that the locals use the mud to keep the bugs away and that it is not their true skin. Harrison just learned the hard way that appearances can be deceiving and that true beauty is on the inside. Bonner realizes that the Tlak'kahn must have the gate coordinates to every planet he has visited, so he dials the Stargate to a new unexplored world.