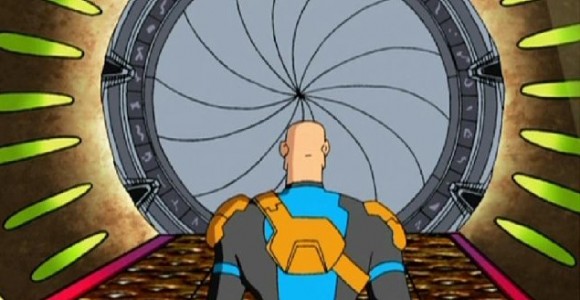 When the hostile Tlak'kahn invade Stargate Command to steal a mysterious new lifeform, recently court-martialed Major Gus Bonner must lead a team of young cadets to stop them.

Cadets R.J. Harrison and Stacey Bonner return from a training mission, where young Harrison failed to make a decision – correct or incorrect. Their supervising officer told him that he had to learn to make decisions and then live with the consequences – indecision is not an option.

The team returns to the Stargate Command facility, Earth's first line of defense against the hostile alien species throughout the universe. But on this day, the enemy may just be within their own ranks.

Stacey and R.J. attend a hearing that will determine the fate of her uncle, veteran S.G.C. officer Major Gus Bonner. He is accused of violating orders from Stargate Command and sending his team into an ambush during a recent off-world mission to PR6-308. Bonner denies giving the order, though Stargate Command has the entire incident on video from his helmet video unit.

Bonner is found guilty, and held is custody.

Meanwhile, cadets Seattle Montoya and half-alien Ec'co visit the base laboratory. A startling discovery has been made: a sarcophagus has been found on Earth made from naquadah, the same material as the Stargate itself. Dr. Mason believes it may have a connection to the Ancients, the builders of the gate network.

She scans the sarcophagus, and discovers living bio-matter inside. It isn't a mummified person, but rather a statue with some sort of alien creature hibernating in it. And the alien wakes up, and breaks out; it's a large, worm-like creature. The empathic Montoya senses that it is scared, and Ec'co helps to capture it before it can escape the lab.

Captain Grimes takes note of it, and makes contact with the Tlak'kahn. A vicious, animal-like species, they have only recently been encountered by Stargate Command. A team of Tlak'kahn warriors, led by the cunning Da'kyll, invades the base when Grimes opens the iris barrier that normally prevents enemies from coming through.

Grimes, it seems, is not really an S.G.C. officer. He is an alien shape-shifter named Nephestis, who is working with the Tlak'kahn. He shape-shifts into the form of Major Bonner, and eliminates Cadet Harrison and the gate technician before opening the iris.

The Tlak'kahn quickly establish a presence at the base, intent on capturing the alien creature – which may be an Ancient itself. Ec'co and Montoya try to keep it out of their hands, but Da'kyll's men soon capture it.

Nephestis speaks with Da'kyll, and tells him the truth about Major Bonner's "crime." It was Nephestis himself, who took the form of Bonner and stole his helmet during the off-world mission. He knowingly sent Bonner's team into a Tlak'kahn ambush, while Bonner was asleep.

Gus, meanwhile, must convince Stacey and R.J. that he isn't working with the Tlak'kahn. He joins them in a mission to rescue the alien creature. A fire-fight ensues in the gate room, and the team mounts up on their vehicles. It's the only solution they have, since the Tlak'kahn have taken over Stargate Command. They retake the alien, then escape through the gate – Gus, Stacey, R.J., Seattle and Ec'co.

The team arrives in a surprise attack on the Tlak'kahn base. As the Tlak'kahn weren't expecting them, they quickly neutralize them and escape through the gate to another planet. They can't go home yet, and must keep the alien infant safe.