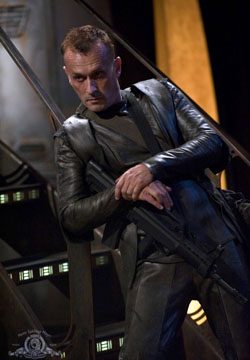 The countdown ends today!  Stargate Universe moves to its new night — Tuesdays at 9 p.m (8 Central) — when its second season premieres tonight on Syfy Channel in the U.S.  (It’s airing this Friday in Canada and Australia, and next Tuesday on Sky1 in the U.K.)

The big premiere, of course, means that the show’s cast and crew have been doing the rounds chatting up the media about Season Two.  Here at GateWorld we have brand new interviews with Louis Ferreira (Colonel Young), Ming-Na (Camille Wray), and Alaina Huffman (T.J. Johansen) — with more on the way!

In addition to our continuing coverage at GateWorld, here are highlights of just some of the SGU coverage from around the Web this week:

Stargate Universe Season 2: Catch-Up Guide (TV Squad)
Our friend Mike Moody writes for AOL’s big television blog, TV Squad.  Here’s his primer for new viewers ready to jump into Season Two of SGU, complete with quotes from Wright and series co-star David Blue (Eli Wallace).  It includes everything from “What’s a Stargate?” and “What’s different about SGU?” to “What to expect from Season Two.”

Stargate Universe Co-Creator Brad Wright Previews Season 2 (TV Deathray)
Mike has just launched a brand new genre news site in TV Deathray, and this interview is what we call a “lead-off homer.”  Brad Wright talks about the crew’s new mission, , and doing more cool CG aliens:  “We definitely run into some more very cool aliens,” he said. “They’re CG again. The aliens that we meet in episode 3, in terms of the quality, it’s just astounding what we can do now in terms of — well, I say ‘we’ like I had something to do with it [laughs] — but what our digital effects folks can do now is just astounding.  And then, of course, we have yet even more aliens that we will encounter later on in the season, in the mid-season two-parter, and the blue guys that have been chasing us haven’t gone away yet.”

You’ll also spot a few new photos there, including the shot of Simeon (guest star Robert Knepper) above.  (There are more at Stargate.MGM.com.) And GateWorld’s editor (yours truly) may also pop up on the new TV Deathray podcast in the near future …

Stargate Universe Picks Up the Pace in Season 2 (Airlock Alpha)
Our pal Michael Hinman recaps the cliffhanger finale and then takes a non-spoilery peek ahead at Season Two.  “One actor who is really standing head and shoulders above everyone else — at least as we start the second season — is Louis Ferreira as Col. Young,” Michael says, “who not only is facing an enemy that seems to be tearing apart the ragtag crew he inherited, but also the kind of loss that would be difficult — if not impossible — for many of us to face. Young’s command and attempt to create stability is falling apart around him, and Ferreira shines in these moments, giving us a sense of desperation through Young that has not been felt yet in the Stargate franchise.”

It’s All About the Ensemble on Stargate Universe (Airlock Alpha)
Last week actors Lou Diamond Phillips (Colonel Telford) and Ming-Na took part in a big media conference call, so you’ll find a lot from these two floating around the Interwebs this week.  The gang at Airlock Alpha keyed in on their comments about relationships — both among the characters on-camera and the members of the cast off-camera. “I think we got very, very fortunate,” Phillips said. “I mean, sometimes, the chips fall differently, and you get different personalities put together literally from Day One. [But] no matter the level of experience, the ensemble treated one another with respect, had expectations of high standards and nobody was a diva. And that hasn’t changed.”

Collider On-Set Video Interviews (Collider)
Steve Weintraub has been blessing us for the last week or so with video interviews he was able to conduct right on the Destiny set during a recent visit to Vancouver.  These are definitely not to be missed.  Published so far:  David Blue and Elyse Levesque (Chloe Armstrong), Brad Wright, and Robert Carlyle (Nicholas Rush).

Reviewed! The Stargate Universe Season 2 Premiere (CinemaSpy)
CinemaSpy’s Michael Simpson panned the show early on in its first season, then came back near the finale and praised it for finding its footing and turning into a must-watch show.  He gives a spoiler-lite review of tonight’s episode, concluding: “While the more action-oriented parts of ‘Intervention’ reminded me of Atlantis, the orange hue, fuzzy lighting and hints at wonder in the off-ship storyline had something of a Star Trek: Deep Space Nine feel about them. Maybe that’s a bad thing given that the producers are trying to make Stargate Universe go places that no such show has gone before (isn’t that a wonderful cliché). There’s something to be said, though, for occasionally resembling one of the best science fiction series ever made. For one thing, it’s indicative of SGU‘s growing sci-fi credentials. Based on the last few episodes of the series and the Season 2 trailer, we are now firmly out of the realms of melodrama and into intelligent human drama.” 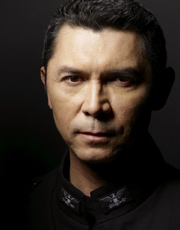 The Destiny Bridge! (Show Patrol)
Show Patrol gets an incredible sneak peek at this year’s major new addition to the SGU standing sets, with photos and video from Destiny‘s bridge.

Brace for reveal time in the new Stargate season (The Province)
“We find out a helluva lot more about what Destiny‘s original mission was all about and recognize it’s not so much about getting home but about fulfilling that mission,” Wright says.

Carlyle settles nicely into the Stargate franchise (Metro World News)
“Can I give everything away? No, I can’t,” Carlyle says. “No, but what I can say is the heart of the second season is the revelation that there is in fact a mission, that there always has been a mission, and it’s never been about going home. I learned this expression in San Diego, at Comic-Con. It’s called a ‘game-changer.’ It’s a game-changer, episode eight.”

Interview with Lou Diamond Phillips and Ming-Na (ACED Magazine)
Ming-Na and Lou Diamond Phillips talk about their characters and their roles in the new season.  “I think Camille is interesting because she starts off someone who really wanted to maintain the status quo of what she was used to on Earth and on Icarus Base,” Ming-Na says. “And she’s had to really learn to throw that book away and be more instinctual and think more on her feet. So for me, I find it fascinating that here’s a woman that she feels like she can compartmentalize her two worlds, her personal life and life in the workforce. And now it’s kind of meshed into where her life and her work is just on Destiny.”

There’s also a longer recap of the media call at Daemon’s TV, but without many direct quotations.

For more Stargate coverage on the Web, keep an eye on the “On the Web” box at the bottom of GateWorld’s home page, or our Twitter feed, or subscribe to the news ticker’s RSS feed!  We post links nearly every day at this time of year, but don’t always flag them down with a news story like this one.

Tune in tonight at 9 p.m. (8 Central) on Syfy for the season premiere of Stargate Universe!