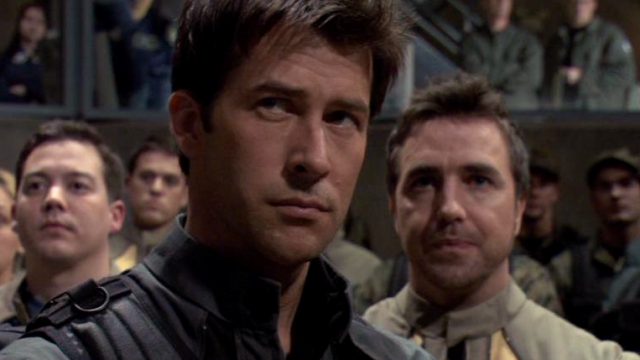 A new Stargate team embarks on a dangerous mission to a distant galaxy, where they discover a mythical lost city and a deadly new enemy — the vampiric Wraith, which is oppressing the Pegasus Galaxy by feeding on sentient beings.

Rewatch “Rising” (Parts 1 & 2) this week! Then post your comments below, or head over to the episode discussion threads and see what people were saying back in the day. What are your favorite moments?

I love this one. The intro of Carson is so cute, and the O’Neal Rodney exchange makes me chuckle.

“with Amanda Tapping joining the Atlantis cast full-time for its fifth season.” it was the fourth season, woozie joined for the fifth. remember she got fired and woozie said he was replacing her.

I truly love this show and this pilot episode, but I’ve always disliked the character of Teyla. Luttrell is an absolutely hottie, but she’s a pretty awful actor, in my opinion.

I never saw anything about that.

As far as Luttrell, I felt she was severely underused as well as Rainbow. I never enjoyed the show as much as I did for the first season. The writers just stopped having any imagination and started retreading the same well, IMO.

Expectation can be a destructive thing. I say that because Rising offered so much promise for Atlantis as a series and concept, and hinted at a major expansion of the Stargate format. The characters, casting, setting, new enemy, technology and the city itself all offering the promise of great things. I especially liked the sense of adventure in new parts unknown, and the hint of possible A.I. Tech in the city itself. The visuals and the music throughout are wonderful, from Atlantis leaving Earth, to that final shot of the city at night. However, as the series goes on it… Read more »

Atlantis had so much promise. But the later seasons faltered due to the changeover from Weir to Carter to Woolsey, as well as stagnant arcs and the losses of great characters.

And especially because Teyla’s arc was boring as hell.

I don’t know if anyone else saw the writing on the wall. But It was very clear to me that they were setting up Sheppard and Teyla for a romance. Add in the later revelation that Teyla has a deeper connection to the Wraith with the given fact that Sheppard is a natural at using Ancient gene-based technology and you got yourself a Romeo and Juliet like situation. I think the final nail in the coffin for the romance was Rachel Luttrell being pregnant and the writers not desiring to show-in a way for it to be Sheppard’s. So Teyla… Read more »