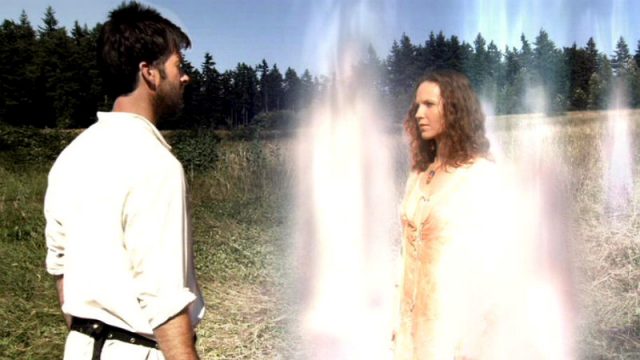 Ascension. In the fictional Stargate universe it is the process of shedding the mortal existence, moving beyond organic life and death to move on to a higher plane of existence. Here a person exists as pure energy, and can live on indefinitely in the contemplation of the universe.

In the first of a brand new series tracking the major story arcs and ongoing plot lines of the Stargate series, we’re tackling ascension. While it began as a metaphysical wonder that kept the Ancients shrouded in mystery, eventually our characters came to learn more about ascension, to be able to measure it, and — in at least one case — even to experience it for themselves.

Of course this isn’t every episode that includes ascension or an ascended being. Instead it’s a bit of a viewer’s guide to the concept of ascension. So for your rewatch we’re picking out those episodes that are focused in some way on the process of ascending to the higher plane — what it is, how one achieves it, etc. These episodes taught us something new about ascension that we didn’t already know, expanding the mythology of the Stargate universe in a fantastical new direction.

So if you want a quick rewatch that will tell you the story of ascension, this story arc is for you!

Ready to release your burden? Here is the arc:

Searching for the infant child of Sha’re, SG-1 and Master Bra’tac arrive on the mythical planet Kheb. It is a place no Goa’uld dares to tread, and where Jaffa go to die. Daniel Jackson encounters a monk, who speaks in riddles but promises to help him learn great powers. It is here that the team encounters their first ascended being — Oma Desala — and learns that the child is well-protected.

The team’s next close-encounter with one of these ascended beings came when one of them followed them home from the planet Velona. Orlin had been living a solitary existence since the planet was decimated by the Others — a punishment for his intervention in their society. Now Orlin has become smitten with Major Samantha Carter. And it’s here that we get a big hint about who the ascended beings are: Orlin can build a Stargate.

Oma Desala returns to commune with Daniel when he finds himself near death, having exposed himself to lethal radiation to save the people of Kelowna. It is a moment of crisis for Daniel, but Oma offers him a path forward: Daniel himself can ascend, and continue his journey in another form. But first he must give up his old life, and be willing to leave the mortal existence behind.

Having been forced to retake human form because he transgressed the Ancients’ rules, Daniel has fought alongside his friends for another two years. But when he is captured and eventually stabbed by the Replicator leader, Daniel again finds himself on the astral plane — or at least in the diner down the road. Here he encounters not just Oma, and not just the half-ascended villain Anubis, but the “Others” themselves — who rather fittingly appear as diner patrons who are utterly disinterested in what is going on around them.

Stargate Atlantis had done ascended beings before (“Sanctuary”), but in the second season we meet a colony of humans who are actively working toward following the Ancients and achieving ascension themselves. John Sheppard becomes trapped inside their community, which is located within a time dilation field. Time passes more quickly here, so in the hours it takes his team to find a way to rescue him, John spends months with the villagers. But his hours in meditation soon give way to a fight against an invisible monster.

Before the Lanteans eventually learned how to ascend, they spent generations studying it while living in Atlantis. When Rodney McKay finds a disused laboratory in the city, he is zapped with a beam of energy that gives him super-powers — evidently a step along the way toward advanced human evolution. But his body can’t handle the changes, and soon it becomes clear that there is one and only one way for Rodney to escape a grim death: he has to ascend. It becomes a science problem for McKay, who puts his tech to use to try and measure ascension and figure out how to do it … before his body gives out.

GHOST IN THE MACHINE

They thought they had eliminated the Replicators once and for all. But when Atlantis becomes aware of a group of refugees from the war, they get some shocking news: their leader claims to be Elizabeth Weir, or at least the disembodied consciousness of her Replicator double. They were once followers of Niam, a movement of Asurans who wished to follow the Lanteans in ascension. But “Weir” and the others didn’t exactly get what they hoped for when they shed their own mortal coils.

“The Arc” is a new feature at GateWorld! Drop a comment below and tell us which storyline you’d like to see us trace with a future viewer’s guide.

If you make use of this list we’d also love to hear about your rewatch!

Evolution of the Replicators could be cool

Could you do an Arc that shows us the aliens that SG-1 met that weren’t Goa’uld, Replicators, Ancients, or Wraith? That is if it hasn’t already been done.