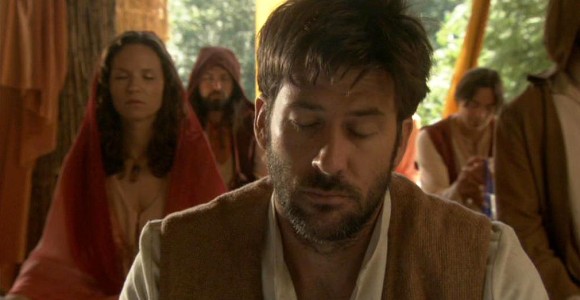 Sheppard finds himself on a planet where time passes more rapidly, with no way to contact his team or return to Atlantis.

On an alien planet Lt. Colonel John Sheppard, Dr. Rodney McKay, Teyla Emmagan, and Ronon Dex fly the Puddle Jumper toward a crater giving off spiked energy readings. McKay is curious. Sheppard lands the Jumper to proceed on foot to explore. The team finds a partially concealed cave with a doorway that has Ancient writings on it; Teyla recognizes the words "welcome" and "ascension."

Only then does McKay make an astonishing discovery. The camera's memory is full and the batteries are dead after using it for only a few minutes. Hours have been recorded. McKay realizes that time passes much more quickly on the other side. And that means that Sheppard has already spent days there without supplies. Quickly the team takes whatever they have and heave it through the portal, and McKay leaves to get help.

On the other side, Sheppard has spent days camped out by the portal. He's on his last energy bar when the cavern shakes with an earthquake and out of the portal pops the supplies the team just threw to him. He's already growing a beard. Again, more days pass on his side before he is forced to leave the cave and look for food.

Sheppard discovers a green valley with an open field, where a man runs up to him in sheer terror. He tries to tell Sheppard there's a beast gaining on him. A beast about seven feet tall appears as a partially visible monster with claws, scales, and head ridge. It wastes no time attacking them both, and in the fight Sheppard is knocked unconscious, getting claw wounds for his trouble.

John wakes up in the usual primitive human surroundings found on so many human-inhabited planets in the Pegasus Galaxy. The man who found him, Avrid, and his sister, Teer, explain that the Ancients created this whole area to protect people while they are trying to ascend. John is shocked to learn that there is one and only one way out: ascension. He must lose his physical body and reach a higher plane of existence.

Stranded with the villagers, the weeks turn into months. John tries to blend in by meditating with them and learning from them. But no one is ascending. One day the beast attacks the village itself, and Sheppard must defend Hedda, the little girl who healed him with the Ancient's powers. He is appalled when the other villagers run inside to hide, as if that would help against the non-corporeal beast. Sheppard faces the beast alone, feeling abandoned and hung out to dry by the passive inhabitants. But soon Teer bravely emerges to stand with him. But the beast nearly kills the Colonel again.

Sheppard tells the villagers they have to face their fears and fight it. If they don't and the creature kills them, there will be no ascension. As more time passes, Sheppard feels abandoned by his team and becomes depressed. What he doesn't know is that outside the Cloister only a few hours have passed, and McKay has made it back to Atlantis to get help.

Dr. Elizabeth Weir, Dr. Carson Beckett, McKay, and a pilot bring supplies and return to the planet to join up with Teyla and Ronon. To determine more about the temporal field, McKay fires a probe into the barrier. Before being torn apart by the temporal forces of the barrier, the probe sends back readings indicating where to find the field's power source. McKay is confident he can turn it off. Reaching the cave, he analyzes Teyla's experiment with the camera, calculating that time inside the crater is advancing roughly 250 times normal.

In the hope of rescuing Sheppard – and possibly landing a Z.P.M. as well – the group goes through, knowing it may be a one-way trip.

In the village, Sheppard tries to explain that never experiencing life as a human means missing out on great things. Teer reveals her precognitive abilities. She tells Sheppard that he will be the one to help them all ascend – she has foreseen it for many years. Then she reveals that his team is close by, trying to rescue him – but they are about to be attacked by the beast. Alone, John races to help them.

The villagers come to help, realizing now that the beast is a manifestation of their own fears. Having released this last burden and vanquishing the creature, the villagers all start to ascend. As Teer ascends, she offers John to come with her. But ascension is not something for which he is ready. Teer tells them that the portal will now let them leave, but that it must remain in place for future followers of the path.