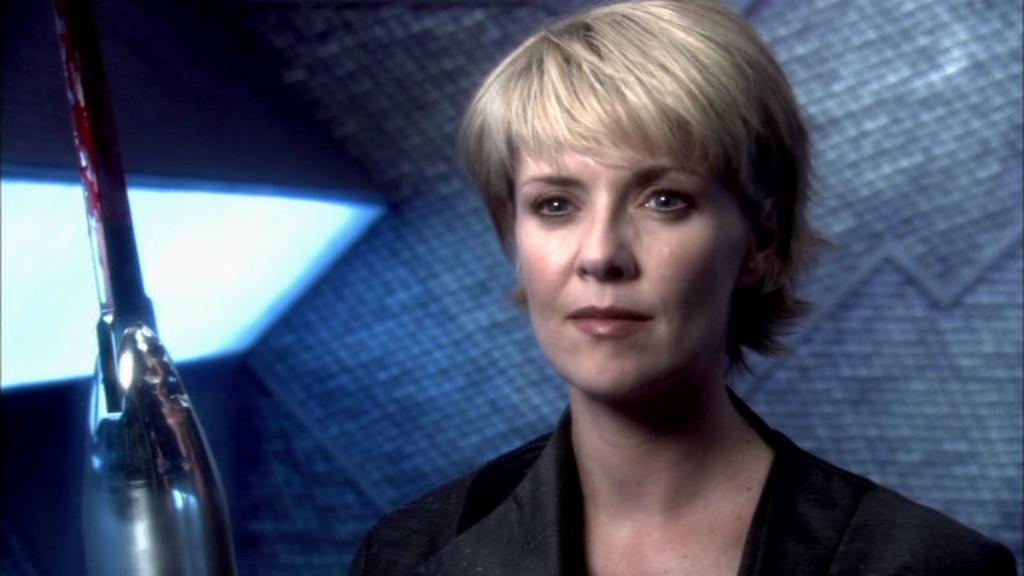 Humanoid Replicator fabricated with the image and memories of Samantha Carter by Fifth, who intended to make her both a companion and weapon. Created without the knowledge or consent of Major Samantha Carter, the advanced Replicator became a scourge across galaxies and ultimately transformed the face of the Milky Way forever.

After activation Fifth began to force the Carter duplicate to play out scenarios, killing her comrades in the hopes that he could force her to disassociate herself from the original woman. Thus she would become a desensitized killing machine. Instead, Fifth created a monster that became so detested by him and possessed a thirst for her own power that she eventually began to develop plans within plans to achieve it. The real Samantha Carter was bound by principle, duty and loyalty. The Replicator version had no restrictions and allowed her ambition to run free.

The Carter Replicator emerges from her construction platform. From "New Order, Part 2"

Months after her creation and the beginning of her training the Carter Replicator contacted Stargate Command. Knowing they possessed a weapon capable of disrupting and rendering inert the kerons that make up the humanoid forms, she claimed she wished to be destroyed. However, she knew that the curiosity of the original Carter would prevent her from being killed.

Replicator Carter informed the humans that Fifth had managed to counter the Replicator disruptor technology, and that she intended to work with them to find a cipher that would make the device a threat to him again. Instead, she spent her time on the Alpha Site with the computers learning how the device actually worked -- to make a defense for herself. Fifth believed that she had traveled there to share the knowledge of the device with all of the Replicators. In fact, when she discovered how to protect herself against it she did not pass on the cipher to him.

Consequently, both Fifth and his ship were destroyed on approach to the Alpha Site by the disruptor technology. At this point Replicator Carter was fully aware of how to protect herself and her brethren from the device. She escaped through the Stargate to make more Replicators and eventually return in the hopes of conquering the galaxy.

Her forces soon grew numbers too numerous to defeat. Replicator Carter led her army back into the Milky Way and launched an all-out attack on the Goa'uld, marching into their territories and seizing their technology. She captured Daniel Jackson and found the Ancient knowledge buried in his mind to ensure the annihilation of anything that would be capable of destroying her. To this end, she found knowledge of the Dakara super-weapon, a device that, when set correctly, could defeat the Replicators (en masse) forever.

Dr. Jackson fights Replicator Carter for power over her forces. From "Reckoning, Part 2"

Replicator Carter sent her forces to Dakara to eradicate the weapon, battling against the remaining Goa'uld forces she had not destroyed, as well as a small band of Jaffa rebels. The real Carter and her father Jacob, assisted by Baal, successfully manipulated the Dakara super-weapon to a setting that would destroy the Replicators. After the device was initiated, Replicator Carter and all her brethren in the Milky Way were destroyed.

Because of Replicator Carter's decision to move against the Goa'uld the power struggle that ensued eventually demolished the majority of the Goa'uld forces. With the destruction of the Replicators themselves, many unoccupied Goa'uld vessels soon fell into the domains of groups such as the Free Jaffa Nation and the Lucian Alliance.

New Order, Part 2 - Replicator Carter is conceived by Fifth, who intends to rule the galaxy with her at his side.
Gemini - Replicator Carter travels to the Alpha Site under the pretense of modifying the Replicator disruptor technology to neutralize Fifth; instead, she learns how to protect herself against it.
Reckoning, Part 1 - Having seized control of the Replicator army, Carter's doppelganger captures Daniel to learn if the Ancients have left any technology capable of stopping her.
Reckoning, Part 2 - Poised to destroy the Goa'uld and take over the galaxy, Replicator Carter and her forces are destroyed by the Ancient super-weapon on Dakara.