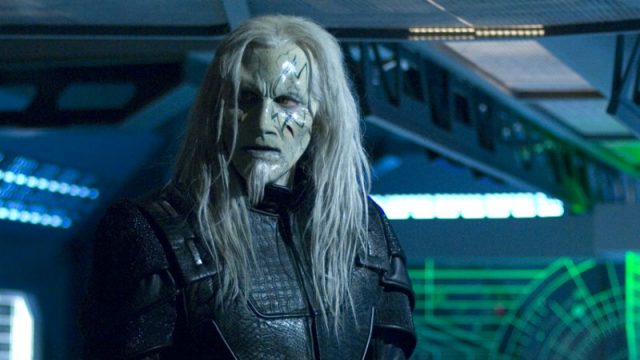 Another batch of pages is out from the script for Stargate: Extinction, thanks to writer (and former Atlantis executive producer) Joseph Mallozzi. After our previous report on the first four pages we’re now up to eight, doled out in no particular order, thanks to Joe’s blog.

MGM and Syfy Channel originally green-lit the film in 2008. It was meant to air on Syfy and see a home video release — the first of what was to be an ongoing series of Atlantis movies. But after the studio entered bankruptcy and the sets were struck, Extinction was shelved at the end of 2010. 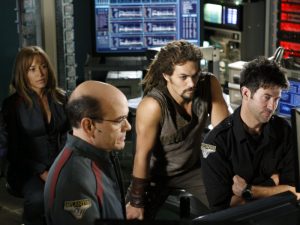 Woolsey and the Atlantis team would have faced a challenge like no other in Stargate: Extinction.

In the years that followed Mallozzi has revealed some plot details about the cancelled project. But now we have a direct look at several pages, with some fun character beats and tantalizing plot points.

Take a look at the first pages here. What follows is our analysis of the second batch of pages:

The team’s biggest frienemy, Todd the Wraith (Christopher Heyerdahl), looks to be heavily featured in the Extinction script. The Atlantis team tangles not only with the sinister alien whom they are holding prisoner, but also with Todd’s doppelganger from the future.

In the first new page released, Future Todd leads Rodney McKay to a hanger where they find the time ship that Todd piloted back to our time.

The location is interesting: it’s an alien science facility. Here the action is evidently not set on Atlantis, adrift in space after its wormhole drive burned out during the return trip to the Pegasus Galaxy. The team has found a populated world, which may be where they meet the scientist Kara. 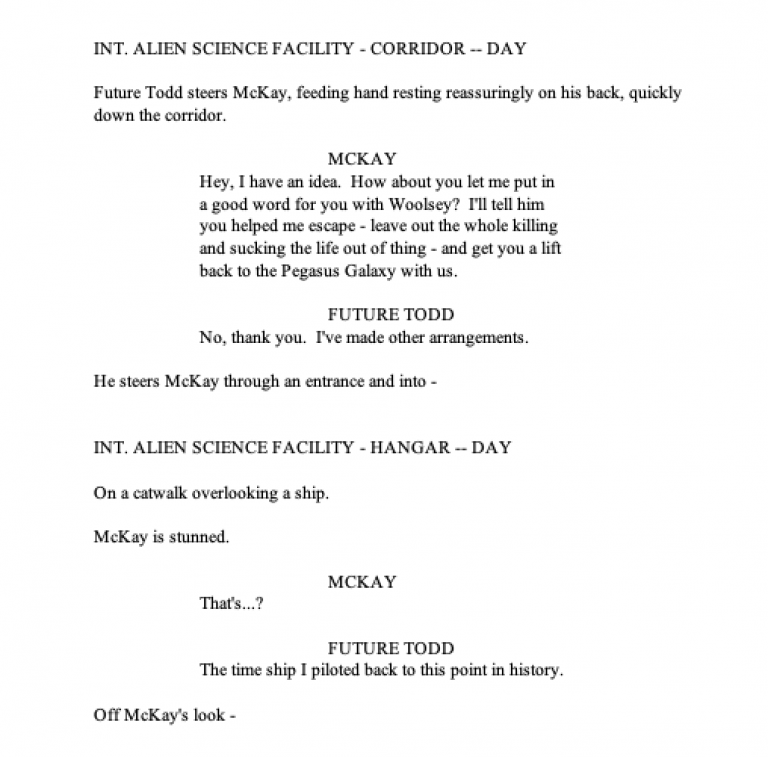 Also of interest here is the ship itself. Is this a time-traveling Puddle Jumper, akin to the time ship that SG-1 found in the Milky Way Galaxy (“It’s Good To Be King”)? Or it is a vessel not of Ancient design? 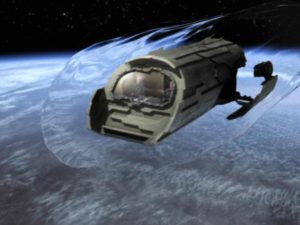 SG-1 used the Puddle Jumper to travel through time just once — in the eighth season finale “Moebius.”

Speculation on social media last week leaned toward the former, which Mallozzi appeared to play into. That leaves us with one more, giant question: How can Todd pilot a Jumper without the Ancient gene? Did he manage to take the gene therapy? Did he hack the ship’s controls? Or did someone else come back in time with him?

Atlantis is in space, evidently trying to reach the Pegasus Galaxy over the course of the film. While John Sheppard leads the military contingent into combat, Mr. Woolsey remains in command of the great city ship.

Now, Atlantis finds itself in the heat of combat.

The alien mothership staring them down isn’t described in any detail on this page, but there are a couple of clues that point to it perhaps being a powerful Wraith hive. The first is that Future Todd seems to be in command of it. He orders someone to open fire, after which Woolsey witnesses the volley of fire heading toward Atlantis. 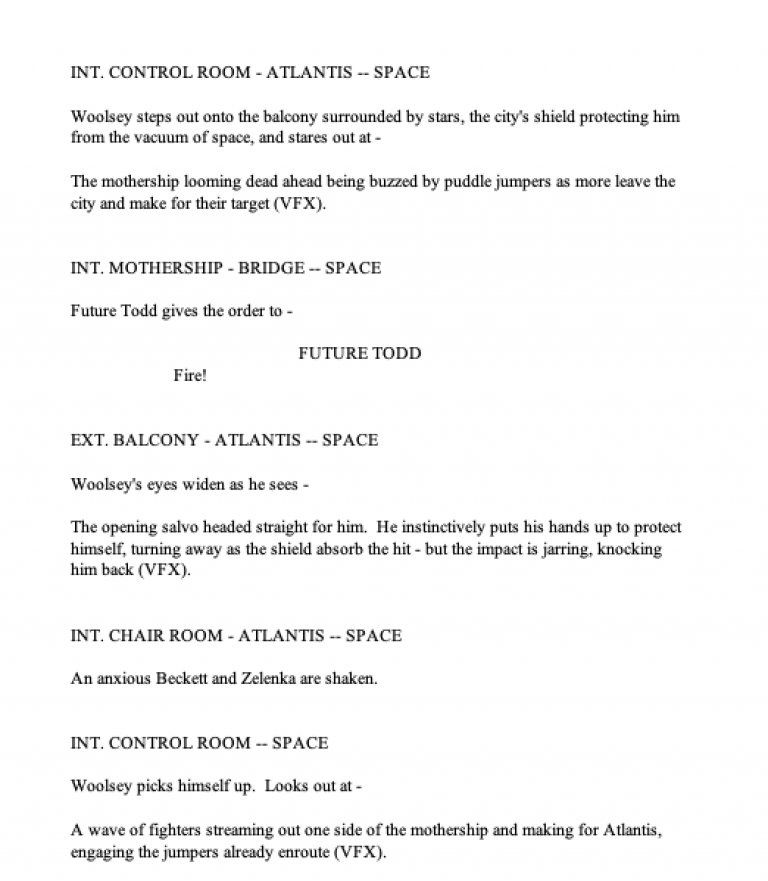 The second clue is that, when the ship launches fighters to take on the Jumpers headed its way, they launch from its side. This is precisely how Wraith Darts stream out of a hive ship.

It is a bit strange, though, that the script is using the word “mothership” rather than “hive” — and “fighters” instead of “Darts.” Perhaps Todd has commandeered a vessel built by Kara’s people?

A scene sure to be a crowd-pleaser sees Colonel Sheppard take on a squad of soldiers using a powerful battle suit. Ronon is also here toting a big-ass stun gun.

The suit looks to have powerful weapons, a personal forceshield, and a heads-up display inside the helmet. It might also give the user enhanced strength. Can’t you just see John blowing upon a door with his fists? 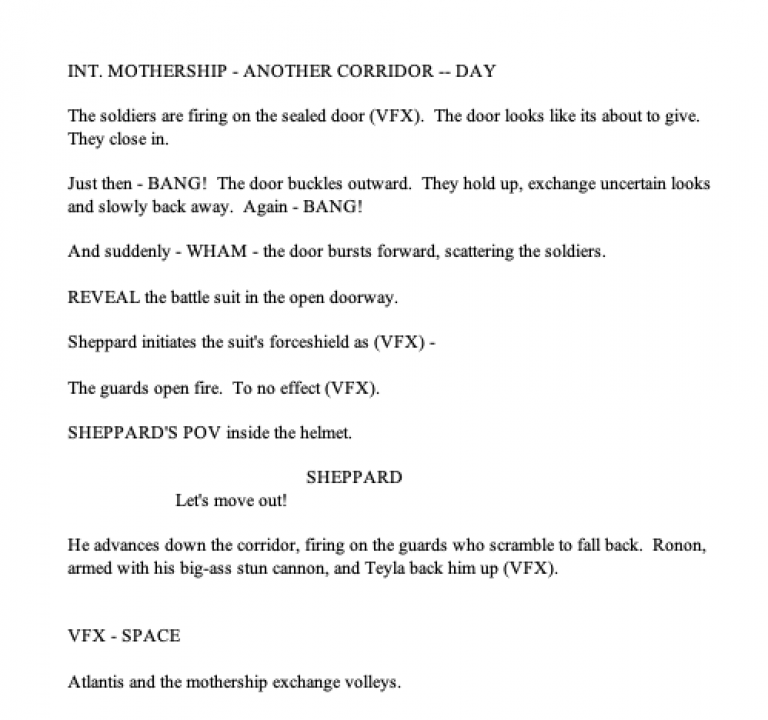 This page also suggests that the action is not taking place on a Wraith hive. The script references “soldiers” and “guards” (rather than Wraith warriors). 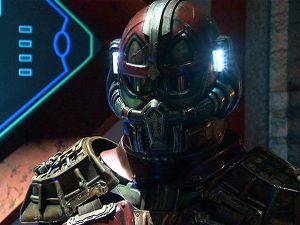 The Asgard wore powerful armor when they appeared in Atlantis‘s fifth season.

It may also be that the suit tech belongs to this race of people. It’s not likely to be the modified Ancient space suit worn by an Asgard when he invaded Atlantis back in Season Five’s “First Contact”. Remember, that suit was blown to hell by a self-destruct mechanism.

Finally, the eighth script page to the hit the Internet takes us back into the heat of space combat. Future Todd commands the alien mothership, which looks to be moving in for the kill.

Then, a familiar face steps onto the bridge and stuns the crew — a very familiar face. It’s our own present-day Todd, who stares down his future self. 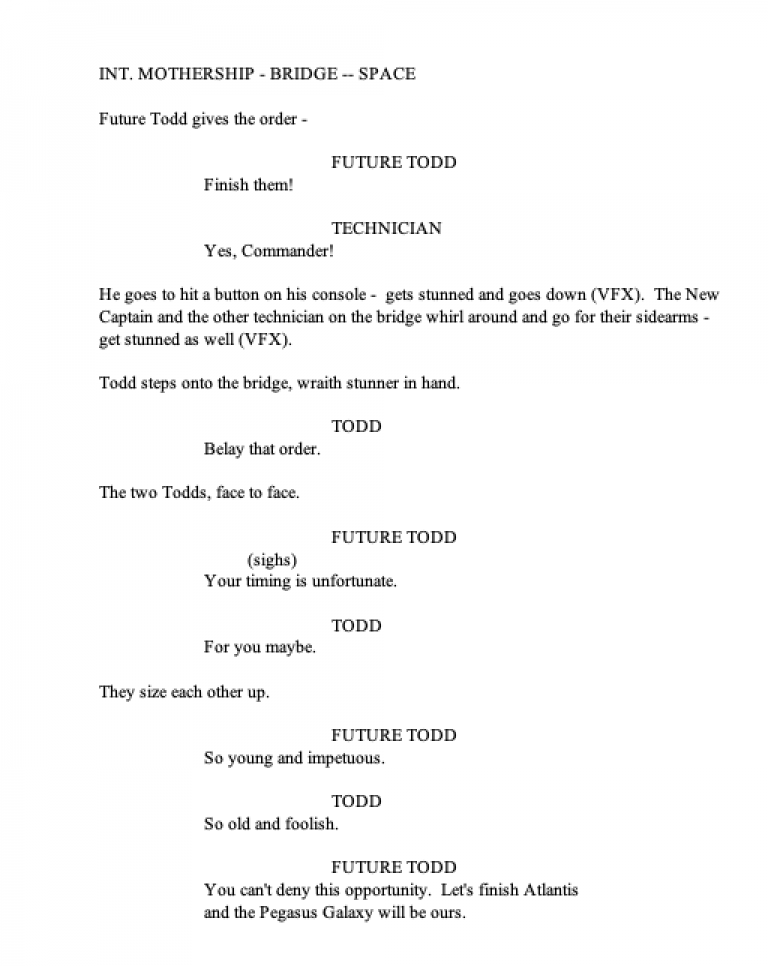 It’s a remarkable turn for the character. While Todd has always been out for himself, he has also viewed Atlantis as a resource he can make use of. And our alliances with the Wraith leader have often aligned. It was Todd, remember, who volunteered himself and his people to be test subjects for Dr. Keller’s retrovirus therapy.

From the scale of these scenes of action and of confrontation, it looks as though Future Todd might have been the movie’s Big Bad. Todd of the Future — however far he comes from — isn’t interested in forging alliances or leaving Atlantis to one day help him against a common enemy. He’s prepared to annihilate the city, and to rule the galaxy himself!

Are there more pages to come? We’ll keep our eyes open and bring you the latest!

Keepem coming. This is great…not as great as a movie but we will take what we can get

Those scripts brought back memories. I wish they would start filming again. Atlantis without Todd is Star Trek without Spock – totally illogical.

Darren, what do you think is behind these actions from Joe?

Honestly, I think Joe just likes sharing stuff. I wouldn’t read anything more into it.

It’s just he always said the script is the property of MGM. And I know it’s only a fraction of the whole script, but these are major spoilers. It seems strange to me.

I think for that reason he won’t ever post the full script (without permission), or pages approaching anywhere near 50% of it.

What this does do it help drum up interest in the future of the franchise. MGM would do well to go on the record about that.

Browsing r/Stargate in the past few days, fans’ judgement on MGM has hit a new low. I am not sure whether it helps much. They had a massive opportunity with Origins, and even after its release, but they have squandered it. More than a year has passed since the release of Origins, and the only thing we still have is a geolocked subscription service with barely any new content.

“Browsing r/Stargate in the past few days, fans’ judgement on MGM has hit a new low.”

I’d put it at 20 below zero (Celsius or Fahrenheit, whichever is colder).

I was so upset when i heard they were not making this movie.The wraith were still in the pegasus galaxy.I would love to see fiture Todd and Col Shepards suit.Too bad Jason mamoa would never retirn considering hes king of Atlantis well Aurthur Curry is aquaman fans:)

How do we know he would not return? Everyone treat it as a fact. Has anyone even asked the guy?

Yes, many times at conventions. There is no way he would return, it’s all in the past for him. There is no way it would ever happen in the first place so I guess it makes his answer easier.

@Nekomajin
I believe he talked about leaving SGA after season 5 (couldn’t blame him at the time with the way he was relegated to holding up the walls for Hewlett and Flanigan).

Look where he is now in his carreer — hell no, he would return to a show that gave him barely anything to wok with.

Too bad they forsaken awesome Atlantis for that stupid Stargate Universe which was nothing more than Big Brother in outer space.

“Too bad they forsaken awesome Atlantis for that stupid Stargate Universe which was nothing more than Big Brother in outer space.”

Um…. what? I’m not sure what you’re even trying to say here.

Too much soap opera, not enough adventure?

Or is Big Brother the one where everybody’s doing everyone and at the same backstabbing everyone. Cause I never watched that drivel so can’t be sure.

After the lame finale this would have been gteat

If Mallozzi is working on a script to pitch, any ideas who might want to take a bite studio-wise? Also, would any of the original SG-Atlantis come back or not come back?

He can’t pitch it to another studio. It’s owned by MGM, not Mallozzi.

-STARGATE IS ABOUT:
EXPLORATION
FUN
RELATION WITH OTHER RACES
ACTION
HISTORY
COOL TECHNOLOGY