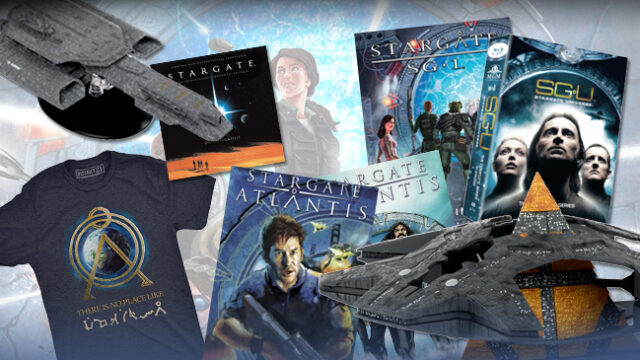 Looking to get a smile this Christmas from that Stargate fanatic in your life? Here are 12 Stargate gift ideas!

With the franchise out of production for a decade now, it’s been a while since Stargate actually had enough cool merch to warrant a holiday giving guide. But here we are, at the end of 2021, with brand new licensees and new Blu-ray disc releases of the entire franchise. There is more than enough here to fill your loved one’s stocking … or maybe to tuck something under the tree for yourself. (Come on, we’ve all done it.)

All prices are in U.S. dollars and are current as of the date of publication, but check these sites for the most current. We’ve linked mostly to U.S. retailers here, but do check your local region for pricing and availability. (Some retailers will also ship internationally.) 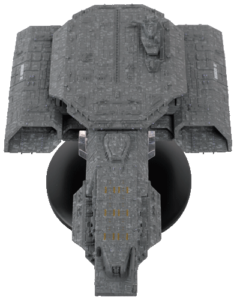 We’re beyond excited for the debut model in a brand new line of Stargate ships from Eaglemoss! The first ship in the Hero Collector series is the Earth deep-space battle cruiser Daedalus, captained by Air Force Colonel Steven Caldwell (Mitch Pileggi). This 8.8-inch model is hand-painted, made of die-cast metal and ABS plastic. Pileggi not included.

Eaglemoss lists this one as shipping in just a few days, though Entertainment Earth (a third-party retailer) has it listed for January. So while it’s worth getting your order in now, keep scrolling if you want to be 100% sure you have something to wrap and put under the tree. 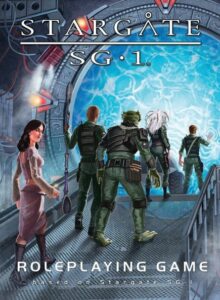 Wyvern Gaming has just released the Stargate SG-1 Roleplaying Game, a core rulebook for your team’s next tabletop adventure. This project is officially licensed by MGM, and ran a Kickstarter campaign last year that fully funded the RPG’s publication in a matter of hours. Players can create their own characters from a variety of Milky Way species, register online to track your progression through multiple play sessions, and team up to represent Earth’s “Phoenix Base” on off-world adventures through the Stargate.

Use the game’s setting and D&D 5e mechanics to create your own storylines, or play through Season One of pre-written episodes from Wyvern’s writers.

Note: Wyvern is currently fulfilling orders for Kickstarter backers and still has the Core Rulebook listed for pre-order. Buying it now will get you the digital edition download immediately, but the hardcover printed edition might not arrive until after the holidays. 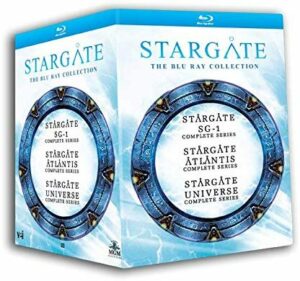 Last winter saw the release of Stargate SG-1 on Blu-ray disc for the very first time! This complete Blu-ray collection includes all three television series together in one — 10 years of SG-1, five years of Atlantis, and two years of Stargate Universe. (Read on for some details about each of these releases from Visual Entertainment, which are also sold separately.)

With the three Stargate shows constantly coming and going from the various streaming services, there is a lot to be said for owning a high-quality copy on physical media. It’s worth having the shows on your shelf, not only to save from the headache when our heroes disappear in the middle of your binge, but also because the Blu-rays generally have a better-looking picture than the streamers.

Here’s our initial impressions review of the Stargate SG-1 discs, plus a picture comparison video over the DVD edition. For those curious about what’s in the box (and how it compares to the classic gold-box Collector’s Edition), check out GateWorld’s long-form unboxing video. 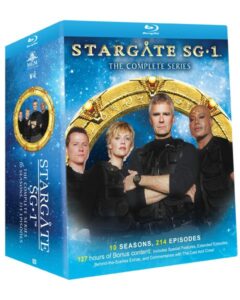 For SG-1‘s first-ever release on high-definition home media, publisher Visual Entertainment did not produce a proper remaster of the series — which would be a costly process that entails going back to the original film and digital files, and possibly rebuilding some visual effects sequences from scratch. Instead this is an upscale, which uses artificial intelligence to produce a higher resolution picture based off the original, finished episodes. There’s some smoothing and digital noise reduction, which produces a clean picture (but which some viewers also think makes the image look less than natural).

On the whole, this Blu-ray release is a solid set for first-time buyers. The episodes look great, and the early seasons of the show — before production switched to filming with digital HD cameras, in 2004 — have never looked better. Most (but not all) of the bonus features from the previous DVD releases are here. The audio is a bit less remarkable, and audiophiles who want a true 5.1 surround sound experience should stick with the previous DVD releases from Sony and 20th Century Fox. 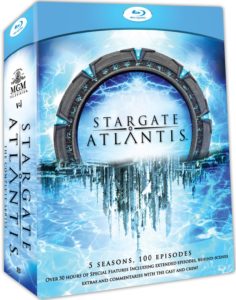 Unless its predecessor, Stargate Atlantis has seen a Blu-ray release already. VEI’s new release uses that digital noise reduction process to produce what the publisher calls a “new super enhanced picture” — which again, some people like and others find off-putting. As a budget line what the VEI releases have going for them is the price: the original Blu-ray release is still north of $80 (U.S.).

The SGA release also comes with more than 50 hours of bonus features. We haven’t tested the audio tracks here yet, but from all appearances this set seems to stick close to the previous releases of the show. It’s a great budget option. 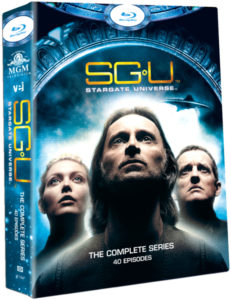 Last but not least is VEI’s recent release of SGU on Blu-ray and DVD. The third live-action series in the franchise aired for just two seasons before it was cancelled, and only one of those seasons was ever released on Blu-ray. So this is a great set to add to your collection, if for nothing else than to have all 40 episodes on physical media in HD.

Along with those episodes the publisher has included the original production commentaries on every episode, along with more than two hours of bonus features. SGU was made in the era of high-def video and full surround sound mixes, so there shouldn’t be any concerns here about what’s in the box. 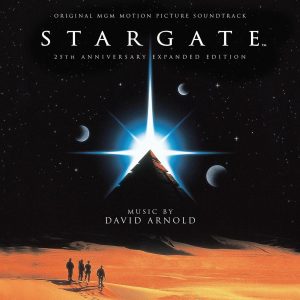 This 2-CD set is the definitive edition of David Arnold’s memorable score from the original Stargate feature film, which burst onto the big screen in October of 1994. In 2019 La-La Land Records released a newly remastered and extended version of the movie soundtrack, commemorating the film’s 25th anniversary. The total run time is 109 minutes of great cinematic music.

This one was previous sold out and is now back in stock on the publisher’s Web site. (Don’t pay Amazon’s current asking price of $50.) It’s worth adding to any collection! 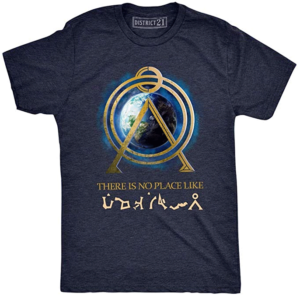 Flex your fandom with some pretty cool T-shirts available on Amazon from sellers like Geek Teez and Trevco. (Some others are definitely not licensed, but if you want a Goa’uld symbiote coming out of your abdomen we won’t judge.) 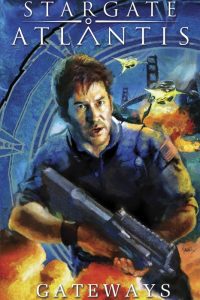 We’re still hoping for more Stargate comics, but in the meantime publisher American Mythology has collected the most recent series into a set of trade paperbacks. The two Stargate Atlantis volumes each collect six issues of the comics from writers Mark L. Haynes and J.C. Vaughn. Volume 1 covers the stories “Back to Pegasus” and “Gateways.” Volume 2 includes “Hearts & Minds” and “Singularity.”

The physical edition of these trade paperbacks appears to have gone out of print, so beware of those astronomical prices on the secondary market. As of press time Amazon still has a few copies of Atlantis Volume 2 paperback left at the $19.99 MSRP, but when these are gone they’re gone. (You can also check in with your local comic shop to see if they can still order them.) 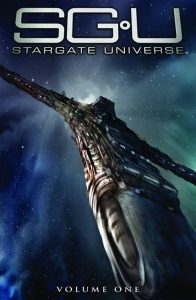 Just like with the Atlantis comics collection, this Stargate Universe trade paperback includes six issues from the recent run from Mark L. Haynes and J.C. Vaughn. “Back to Destiny” imagines how a third season for the cancelled series might have opened, with the crew of Destiny awakened from stasis to a startling realization on board the Ancient vessel.

If you don’t want to pay the prices these are currently going for on the secondary market, you can still pick them up digitally at the original price. These are readable on a Kindle, computer, or other device compatible with comiXology’s standard formats. 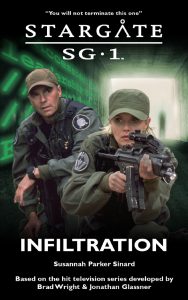 Our friends over at Fandemonium have been publishing original Stargate novels under license from MGM for more than 15 years, imagining brand new adventures for the SG-1 and Atlantis teams. These books are written by real Stargate fans, who for years have lived and breathed these characters and their adventures on screen. If you haven’t dabbled in the Stargate novels, there’s no time like the present to jump in.

Fandemonium hasn’t published anything new this year. The newest book is Stargate SG-1: Infiltration, by Susannah Parker Sinard, which sees SG-1 captured by a Goa’uld called Lugh, who threatens to hand them over to the System Lords. 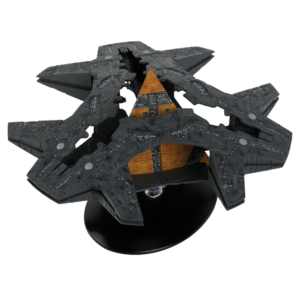 It’s not coming until early next year, so don’t expect to find this one under your tree in 2021. But the second ship in the brand new Hero Collector line will be the Ha’tak-class Goa’uld mothership. We just revealed the photos a couple of weeks ago, and now this formidable alien warship is available for pre-order.

The Goa’uld mothership measures 6.8 x 6.7 inches in diameter, and stands 3 inches tall (plus the included display stand). We’ve been wanting this one for a long time, and we’ll be leaving a spot on the display shelf for the third ship in the line — the Death Glider, coming next year.

Our sources tell us there are more Stargate items coming in 2022, including more ships from Hero Collector, brand new licensees, and a new PC strategy game (Stargate: Timekeepers). Keep your browser locked on GateWorld and follow us on Facebook, Twitter, and YouTube to make sure you see all the latest headlines.

GateWorld earns a commission from purchases made through our affiliate links. Thank you for supporting independent fan journalism!

International shipping makes the USS Daedalus and Mothership twice as expensive, which will bring the cost to 105 dollars (DHL eCommerce which means taxes are applicable, adding another extra charge) or 115 dollars (if you want expedited), and they don’t ship to Russia. From what I heard, Europeans are still waiting for their physical copy of the RPG book from the Kickstarter campaign, to arrive because it has to ship from China and well… we all know how that’s going…so it may arrive by next Christmas. ;) The Stargate SG-1 BR collection … umph on the shipping costs… nearly an… Read more »

Yep, and then I’m lucky that I am on this forum/website anyways, or I would never have known that the core rulebooks are stuck in China at the moment for European customers.

I bought the book, got the digital download immediately. But never did I get any notification or email regarding what the status is of the paper book itself.
Thank god someone shared a communication from Wyvern which they received on the forum, or I would have never known.

That it’s stuck in China, fine. But customer communication is up for improvement from Wyvern’s side.