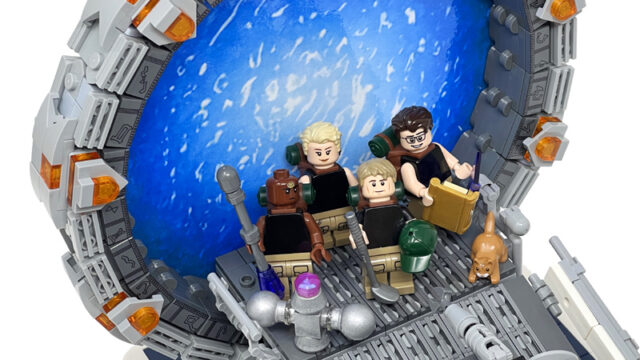 Do you have your own fan-made Stargate project or artwork you want to showcase on GateWorld? Drop us a line and let us know!

THE STARGATE on LEGO IDEAS »

I don’t know about you, but to me the demise of Eaglemoss came as a bit of a shock — especially since they were just starting a line of Stargate model ships. How else are fans going to display our love for this amazing franchise? Well, with a little luck, I might have a solution.

You may have seen it before, as I was promoting the project like crazy all over social media last year: a small, compact representation of Stargate Command’s iconic Stargate and ramp. I had designed it for LEGO Ideas — a clever competition of sorts, organized by The LEGO Group themselves. Fans can submit their concept for a new LEGO set, and if a project manages to reach 10,000 supporters, actual LEGO designers will look at the creation and maybe, just maybe, turn our dream into an official set. (Yes, proposals do have to go through an approvals process first. So we know the Stargate universe is seen as acceptable content to this toy maker — unlike licenses like Star Trek, Babylon 5, and The Orville, which have had trouble getting submissions approved on LEGO Ideas.) 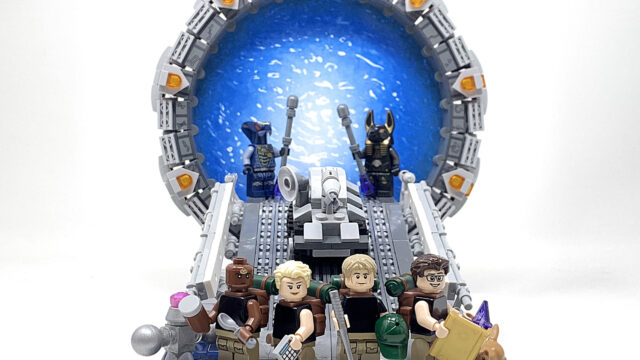 Now, even though I managed to reach this goal in December of last year, my gate wasn’t approved. But all hope is not lost: you see, the most recent winner had to go through the process twice before being accepted. Heck, The Office set, which has just been released, went through it three times!

I really believe that my concept would appeal to many fans. So, armed with that conviction, I decided to tweak the design and give it another go.

But why do I think my build is so special?

It’s Small, and Looks Great From All Angles

It seems that LEGO sets aimed at adults are getting bigger and bigger with each passing year. I don’t know about you, but I don’t have an infinite budget for what is essentially a luxury item. So I chose to condense my creation, paring it down to the essentials of Stargate SG-1 — which is the ramp and, of course, the gate, both of which rest on a simple curved base. 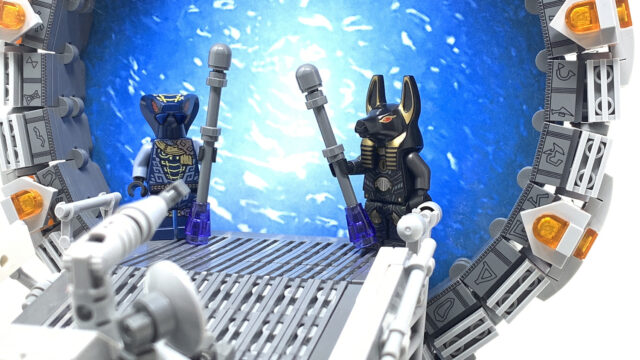 The gate connects to the base with only four studs, in a way that makes it look like it is merely resting on it. I know that’s not how it was in the S.G.C., but for a display piece this makes it look great from any angle.

I’m really pleased with how my gate turned out, complete with its nine chevrons (why is it that so many other LEGO Stargates only aim for seven, sometimes eight, but hardy ever nine?). It’s as close to the correct scale for minifigs as I could make it, and it’s designed in such a way that you can have all the glyphs along the inner ring. A custom printing company was kind enough to make the authentic glyph stickers for me, and I think the result is pretty striking. If they can do that, imagine what LEGO could do themselves!

I rewatched the entire show to try and make sure the glyphs are in their proper orientation, and I hope I got them all right! It was also a bit of a challenge to squeeze 39 glyphs onto 28 1×2 tiles, but I hope you’ll agree that the end result works well.

Sadly, puppet Hammond would be displeased with me … as the inner ring doesn’t spin. I don’t think it’s possible at this scale, at least not without bulking it up — which would compromise the aesthetics. I believe my gate is thick enough as it is.

The entire build is under 1,000 pieces, which means that if LEGO were to produce the set it should cost less than $100. 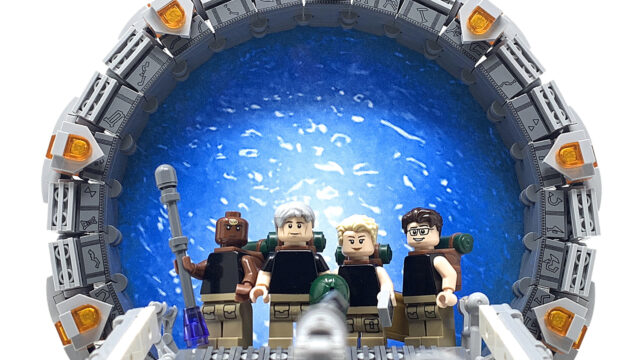 The Team’s (Mostly) All Here

Now a display set is great, but this is LEGO, and since I built the gate to be minifig-scaled, what about the members of SG-1?

I encountered a bit of a challenge there: there is a limit to how many minifigs a set can have (only six). So I settled for four at the bottom of the ramp, along with two Jaffa guarding the Stargate. I feel that gives it a good balance.

The four minifigs represent our original SG-1 team … but why not go further? LEGO has often printed faces on two sides of the head piece to give characters a choice of different expressions. So I wondered: what if this were used to represent different characters instead? After all, the team didn’t really grow in size (hold that thought), but instead characters were replaced as the series went along. That way, I could circumvent the 6-minifigure limit while still having more people.

By adding a few extra interchangeable hair pieces to the set, I was able to include (mostly) all versions of the SG-1 team. 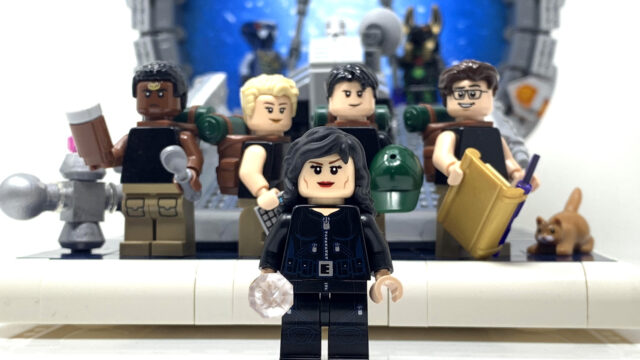 Sadly, my minifigure limit means that I can’t include our favorite “sexy female alien.” I did create her, and who knows: maybe LEGO would include her, should they decide to turn this into an official set!

So this proposal would offer you the gate, the ramp, a couple of Jaffa, and your favorite SG-1 team to display … but all of this might look a little bare. So what to do? Well … who doesn’t love Easter eggs? I know I do! And with that in mind, I thought I’d cram as many as I could into my design.

For starters, I made the M.A.L.P. I found a simple way to make it grip the inclined ramp without rolling off, and without altering the simple aesthetics of the ramp itself. (No, it’s not magnets, but simple friction of rubber on plastic.)

You’ll also find a cache of staff weapons, a naquadah generator, a tub of ice cream (which we know Teal’c loves), a G.D.O., a golf club (for those moments when time keeps repeating itself), Jack’s favorite cap, a book (no doubt filled with knowledge of the Ancients), and Schrödinger the cat. 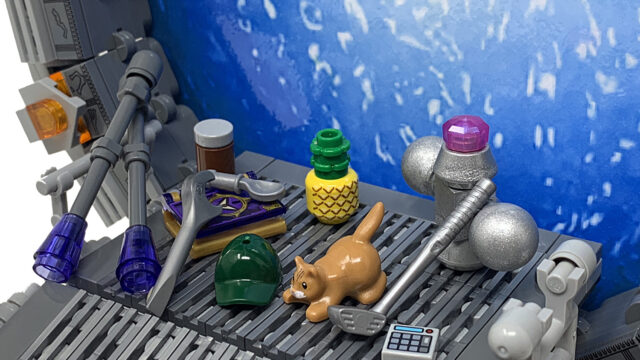 The team members also have their backpacks, ready to explore. They don’t carry weapons, mind you, because LEGO isn’t fond of toy depictions of modern warfare — so I thought it best to avoid them for this project.

But that’s not all. Hidden under the ramp is a pineapple and a giant wrench, for those super fans who know why they’re included! 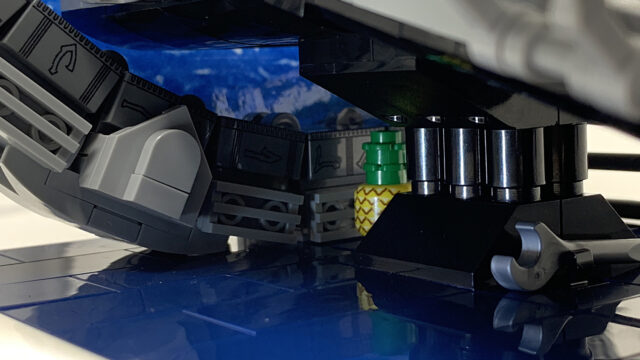 A (Constant) Work In Progress

Those who partake in creating stuff out of LEGO will probably agree that a design is never truly “done.”

I’ve made improvements to my project over time, both during its first run and over the course of this current one. I released them as I reached specific supporter milestones. The multiple-faceted crew was unveiled when we got to 3,333 supporters, for instance, and the inclusion of those printed tiles were to celebrate reaching 5,000 a few weeks ago.

But I’m not done yet! The more I look at my creation the more I feel this part, or that section, could be improved. And I’m working on some changes (some minor, some beefier) which I’ll reveal as the project makes its way towards 10,000 supporters. 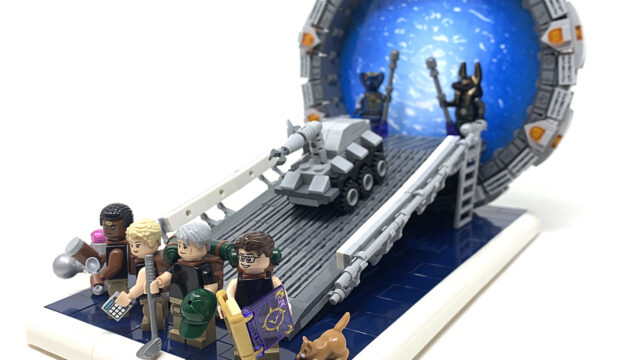 A Call To Action!

If you like what you see, and would love to give this design a chance at being turned into an official set, then all you have to do is visit the project page at LEGO Ideas, register an account (it’s free), and click on the Support button. Telling your friends to do the same would just be icing on the cake!

If you supported my original submission, please support this second attempt! You’ve already created an account, so the process should be even easier for you!

Thank you for taking the time to read this.

Let’s show LEGO we really really want to build our own Stargate!

Just a guy… who thinks he looks like Cthulhu… who enjoys sci-fi, Stargate (obviously), and a certain highly sophisticated interlocking brick system.

I can’t cram a project with everything, and as I said in the article, I aimed for a small design that could be affordable to most fans. And what’s more iconic than the gate itself? :)