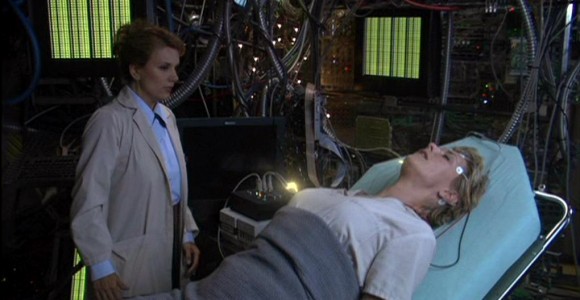 The S.G.C. is invaded by an alien life force that takes up residence in the base computer system – and in Major Carter.

Season Four has been pushing the envelope on atypical lifeforms, and "Entity" is no exception. Thus far we've faced down a formidable enemy of Replicators ("Small Victories"), met up with a planet full of water-like energy beings ("Watergate"), negotiated planet rights with extinct life forms that exist as nothing more than strands of D.N.A. ("Scorched Earth"), and pissed off a super-powered species of dangerous fireflies ("Prodigy").

Now, in "Entity," we find another energy being -- this one capable of growing exponentially in the S.G.C.'s computer systems, or, losing access to that, Sam's brain.

Whatever happened to your garden variety alien species? Things with form and substance that can be dealt with on a physical level? Of course, Stargate SG-1 is a science fiction series, and as such probably has an obligation to find new ways of depicting living things. However, this particular science fiction series was founded on a blending of both primitive and superior cultures, and I'd hate to see that blending lost.

Nonetheless, "Entity" was well-conceived, and the concept of an alien being living in a computer is certainly a timely one. I have no complaints against the ideas behind this episode. I was even taken by surprise to consider that a single M.A.L.P. might cause damage and destruction on a global scale, simply through its radio signals.

I do, however, have some minor gripes about the way certain elements of the plot were presented.

Sarcastic Jack is back with a vengeance. Though I enjoy his witticisms, they may have been slightly overdone here. Was he simply trying to diffuse the tension? Honestly, I'm not sure I saw enough tension in the first place, given the situation. The S.G.C. had been compromised, its computer systems overrun by an unknown entity. It is subsequently quarantined, cut off from the rest of the Earth and all other worlds as well. Yet tension didn't really become evident until the entity fled certain death in its computer nest by downloading itself into Sam.

I thoroughly enjoyed the conflict of interests depicted between Jack and Teal'c (whose primary concern as warriors or protectors is to get rid of the entity) and Sam and Daniel (who, as explorers, want to communicate with it). This conflict continues even after Sam's nearly fatal attempt, with Daniel insisting to Jack that she had not been wrong to try. I would thoroughly agree; yet Jack clearly did not.

There is a lot of potential left in that conflict. Unfortunately, we do not get the opportunity to see any further discussion of the subject. Could the distance between these two characters grow larger for this?

I also can't help but wonder what Sam's opinion would be after recovering. Would she feel any chance to communicate with the entity was worth such a price?

Further, targeting Sam as the entity's "host" might have been a little contrived. This seemed to be just another push to explore a forbidden relationship between Jack and Sam. The entity chose Sam because it knew this one was valued; Jack would not be willing to destroy this one. But how could it know that? What would appear in Jack's files to give it this idea?

Despite the innuendos we've seen, particularly this season, I would think Jack's files would identify no greater bond between him and Sam than it would between him and any other member of his team. Otherwise, both careers would be in jeopardy. Further, why would the entity be more focused on Jack's feelings than General Hammond's? Hammond, after all, is the man in charge, i.e. the final decision-maker.

I enjoyed the confrontation in the infirmary between Hammond, Jack and the entity. Jack's threat to destroy its world was as far from my mind as it was from Daniel's, and I shared his surprise at first. Yet I was quicker to understand Jack's objectives. The entity had already sacrificed its life to go to the S.G.C. It must have known this was a suicide mission. If it was that eager to save its own world, Jack's threat clearly had to be taken seriously.

That threat forced the entity into action. It moved into the corridor to upload Sam's consciousness into ... what? What could be in the hallway that the entity could access? The security cameras? Perhaps, but this part did confuse me. We later see the message "I am here" projected on screens in the S.G.C.'s mainframe as well as in the M.A.L.P. room, although power to the nest there had already been cut. The nest should not have been able to power itself up again. Even before Jack severed its connection to the emergency lighting, we had received multiple messages confirming that the M.A.L.P. room had been completely separated from the rest of the base.

Finally, this all culminates in a Frankenstein sort of ending. Sorry, but when Dr. Fraiser initiates a conduit between Sam and the nest, I couldn't help but envision an old Frankenstein movie. I half-expected someone to excitedly declare, "It's alive!" after all the lightening stopped charging Sam's body.

Yes, I saw many flaws in this episode. Nonetheless, I did enjoy it. Dr. Fraiser had some excellent moments, further showcasing Teryl Rothery's talents -- which are too often overlooked. I'm glad to see her coming to the forefront more often this season. I hope this continues next year.

Also, despite the limited believability factor in the final corridor scene, there was definite electricity to Jack's dilemma about shooting Sam a second time with his zat gun, knowing a second shot usually kills. I couldn't help but wonder if that second shot would in fact be as lethal as usual under the circumstances. After all, Sam's body appeared unaffected by the first. Jack, however, did not seem to share my optimism.

There were some wonderful, emotional moments to "Entity," and some thought-provoking ones as well. These are the things that consistently endear me to Stargate SG-1. Even with such flaws as can be found in this episode, the ideas still come alive.

This says a lot for the team that brings it all together. It takes an exceptional cast and crew to make a success out of what would otherwise be mediocre material.