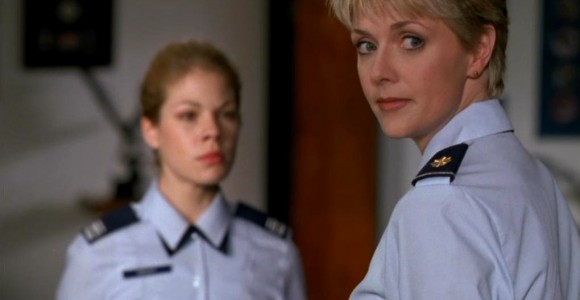 Carter must help keep a promising young cadet from throwing away a future at the S.G.C. O'Neill and Teal'c encounter a dangerous life form at an offworld research base.

Colonel Jack O'Neill and Teal'c are on a less than pleasant assignment to another planet – a moon, actually. They are watching a group of scientists from Earth, who have been working at an off-world research base for the past six weeks. General Hammond is proposing that the facility be made a permanent base.

Dr. Daniel Jackson, meanwhile, is off-world with SG-11, and Major Samantha Carter is giving a lecture on theoretical astrophysics at the United States Air Force Academy. One student in particular – Cadet Jennifer Hailey – catches Sam's eye when she points out an error in a complex equation.

Carter speaks to her professor and to the Academy's General Kerrigan about her, and learns that although Hailey is brilliant, she has discipline problems. She's bored, and though her intelligence and physical skills are exemplary, they are worried that Cadet Hailey just doesn't have what it takes to be an Air Force officer. Seeing her potential contributions to the top-secret Stargate program, Carter takes it upon herself to speak to the young woman.

Back on M4C-862, O'Neill is losing his patience with Dr. Hamilton and his team of scientists – who themselves are frustrated with the military overseeing their research project, and telling them where they can and cannot go. But Colonel O'Neill and Teal'c soon make an amazing discovery: they encounter a small, insect-like creature that can pass through solid matter. The scientists soon encounter another one of the creatures, and capture it for study. They believe it is an energy-based life form – and perhaps one of the greatest discoveries in human history.

On Earth, Major Carter confronts Cadet Hailey and is met with her self-righteous attitude. Hailey says that she has been in Sam's shadow ever since she got to the Academy; Carter has the highest grades in every class Hailey has been in, and has won every award she's ever been up for. Her professors have been comparing her to Carter in everything that she does. Sam tries to convince her not to give up on the Academy program, and on the Air Force. But before Carter has left the campus Hailey gets into a fight while defending a classmate, and breaks the nose of an upperclassman. General Kerrigan intends to throw her out of school, but Carter intervenes on Hailey's behalf.

She takes the young cadet to the S.G.C., deep within Cheyenne Mountain, and convinces General Hammond to give her clearance. If Hailey can get just one glimpse of her possible future, Sam argues, she will graduate at the top of her class and become an officer worthy of serving under Hammond's command. The young woman presents the S.G.C. with an opportunity they cannot afford to pass up.

Carter shows her the Stargate, and they travel to meet the team on M4C-862. Colonel O'Neill greets them, and leads them back to the research camp – where Hamilton and his team are studying the captured life form. They have found that a magnetic charge will keep one contained in a glass vessel.

Carter and Hailey are astonished. But O'Neill orders Hamilton to let this one go, and the scientists begin to look for another life form to study. One of the men, Dr. Thompson, is surrounded by a swarm of the light bugs – which begin to attack him, passing right through his body with a violent jolt of electricity. When O'Neill and Teal'c find him, he is dead.

The Colonel orders everyone back to the Stargate for an immediate evacuation, but a swarm of hundreds of the life forms block their path. They take refuge in the research building, and electrify the thin aluminum walls to keep the energy beings out. A few electrical discharges from zat guns help to defend the building against incursion.

Hailey and Carter come up with two competing theories on why the creatures are attacking them, which lead to two very different courses of action. Carter believes that they are responding to the capture of one of their own, and that staying inside the building won't protect them once the generator fails and the walls are no longer electrified. Someone must make a run for the Stargate and activate it; the electric field generated by the active gate should ward off the life forms and allow everyone else to make it safely to the gate.

Hailey disagrees. Having studied Dr. Thompson's astronomical research, she concludes that the life forms entered an aggressive state because the moon they are on passed through the polar region of the gas giant it orbits. The increased magnetic field changed the life forms' behavior, and if they wait a few hours they should return to normal.

With no conclusive evidence, O'Neill decides to make a run for the gate. Hailey is irritated, believing her equally valid theory is being ignored. But Jack and Sam tell her that it doesn't matter who is right: if he goes for the gate, he's only risking his own life. If they wait a few hours and the generator fails, he risks the lives of the whole party.

A painful shot from Teal'c's zat gun alters Jack's electrical field enough to ward off the swarm as he runs for the gate and begins to dial out. But before he can activate the Stargate, his body re-adjusts, and the swarm begins to attack him. But Teal'c has followed, and a shot from the zat gun at the ground around the D.H.D. keeps the life forms at bay. Colonel O'Neill finishes dialing, and the gate activates. The swarm flees into the woods.

SG-1, Cadet Hailey and the scientists escape through the gate, but must abandon all of their work. Hailey is impressed with what she has seen, and has been given a new goal in her work and her studies.