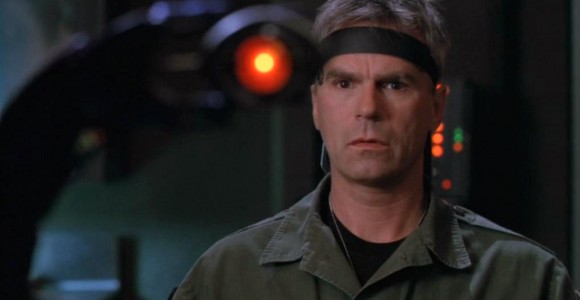 When a member of the S.G.C. tries to kill a Tok'ra, it is revealed that O'Neill and Carter may be victims of an untraceable form of Goa'uld mind control.

When S.G.C. personnel visit the Tok'ra homeworld of Vorash, they are introduced to the Supreme High Councilor Per'sus. He will visit Earth to sign a formal treaty with the President of the United States, formalizing the alliance.

When Martouf introduces Per'sus, Major Graham pulls a weapon of Goa'uld origin, firing at the High Councilor and killing several Tok'ra and another S.G.C. member. He turns to fire at Anise, but Jack O'Neill pushes her out of the way and saves her. Graham is in pain, unable to control himself. He actives the hand weapon, which self-destructs and kills him. SG-1 is stunned at what has happened.

Martouf soon reports that Per'sus will recover. Freya believes that Graham was a "za'tarc" – an assassin subconsciously programmed by the Goa'uld. She has seen evidence of this mind control technology three times before, and presented her findings to the Tok'ra High Council – but they do not believe her.

Freya has theorized that a Goa'uld needs only moments with a victim in order to program him or her with a specific mission and cover it with a false memory. Not even the victim know she has been compromised. When a visual or auditory trigger is encountered (such as Graham's meeting Per'sus), the programming kicks in. Soon after, he becomes self-destructive. In each instance, the victim's brain has been so damaged from the suicide that a study could not be made in order to learn more about the za'tarc technology.

Clearly, if Freya is right, the summit is in danger. There may be other za'tarcs in the ranks of the S.G.C. or the Tok'ra – and someone might be programmed to kill the President, and not even know it.

Freya has developed a method she believes will detect a za'tarc, although the effectiveness of that is also in question. Nevertheless, she brings the device to Earth to begin testing all S.G.C. personnel. On Vorash, the Tok'ra test Per'sus and all his aides who will accompany him to Earth.

Freya's test works by using a device that reads the subconscious memory and compares it to the conscious, to determine if memories have been overwritten with a false alibi. She asks a series of questions, where the subject is asked to recall in detail the events of previous missions. If the conscious memory does not line up with the subconscious, it indicates that either the subject is lying, or is recounting a false memory implanted by the Goa'uld.

They begin with Graham's team. On a recent mission to P6Y-325, they came under fire from the Goa'uld. This is most likely where Graham was programmed. Soon, they learn, Lieutenant Astor was also compromised.

Freya's only course of action to suggest is a dangerous procedure, where the effected part of the brain is actually damaged to destroy the implanted program. If this is not done, Astor will inevitably become self-destructive – whether or not she is able to complete her programming.

Astor agrees to the procedure. It is painful, so much so that she soon pleads for Freya to stop. Martouf orders her to stop the procedure, and Astor goes ballistic. She breaks her bonds and overpowers the two SF guards, taking one of their guns and firing several rounds into the observation room where the team watches. Jack rushes to the room and tries to stop her, but Astor puts the pistol to her head and kills herself.

The programming appears to have protection to keep it from being tampered with. But Freya believes that the procedure may still work, if given a chance to fully run its course.

SG-1 is next to be tested. Jack, Samantha Carter, Daniel Jackson and Teal'c all take turns recalling past missions – especially their unauthorized trip to destroy Apophis's new battleship, with the help of the Atoniek armbands ("Upgrades"). O'Neill and Carter were isolated from the others during the mission, and unconscious for several moments. Freya is concerned that this may have provided the Goa'uld opportunity to program them.

During the mission, Carter's armband (which gave her super speed and strength) failed. She was trapped behind an energy shield when her armband fell off. O'Neill tried to return for her, but his armband fell off, too. He was trapped on the other side of the shield, with noway to reach her.

Sam had told the Colonel to get out while he still could (the ship was about to explode), but he refused. He did everything he could to destroy the shield, but was helpless.

In the end, Sam and Jack said, the C4 explosive detonated and disabled the shield, allowing them to escape together. "Are you sure you are telling me everything?" Freya asks. "Yes," is the certain reply.

The machine tells them that Carter and O'Neill have false memories – they are za'tarcs. The two are put into isolation quarters while Hammond considers a course of action. The summit is only hours away.

They could try the procedure, and allow it to run its course. Or, they could keep them isolated until their trigger event (likely the summit between Per'sus and the President) has passed. The latter is dangerous, Freya says. In at least one past occurrence, the victim became self-destructive when it became clear to him that his mission could not be fulfilled. Even keeping Jack and Sam isolated could be a danger.

Martouf encourages Sam to undergo the procedure. He has grown quite fond of her, he tells her, and recognizes that the choice she is faced with is a terrible one. Either undergo the dangerous procedure (which may destroy her mind, even if it is successful), or be restrained and sedated until the summit is past and a better solution can be found.

Freya, meanwhile, takes the opportunity to thank Jack for saving her life back on Vorash. She kisses him, and offers herself to him. Jack is taken aback – he likes Freya, but doesn't much care for her symbiote, Anise. And he sure isn't comfortable with the whole "two people in one body" thing. Jack turns the beautiful Tok'ra away.

With the summit only minutes away, Sam refuses the procedure, and Dr. Janet Fraiser sedates her. Jack agrees to it, though, believing that if he doesn't survive Freya can study his brain and perhaps learn enough to save Sam.

As Sam grows more and more sedated, she begins to mumble about the testing device. "The machine is wrong," she says. "We lied." Janet is listening, and decides to take action. She stops Freya from starting the procedure on Jack, and revives Sam.

Carter goes to speak with O'Neill in private. She theorizes that the two of them are not za'tarcs. The machine indicated so because they weren't telling the whole truth, and didn't realize it – that's why their conscious statements did not line up with their subconscious.They weren't admitting to the real reason why Jack refused to leave Sam to die on Apophis's ship – a reason they could not admit to given their working relationship and ranks.

Sam tells Freya to retest Colonel O'Neill. When he arrives to the part of the story where he had refused to leave Carter behind, he is forced to make a startling confession: "I care about her ... a lot more than I'm suppose to."

Carter is retested, too – presumably confessing her romantic feelings for Jack. They are not za'tarcs, Freya confirms. The two agree that this confession does not have to leave the room. Only Freya, Teal'c and Dr. Fraiser know about it for now.

In the Gate Room, Daniel, Martouf, Per'sus and the rest of the Tok'ra await the arrival of the President.

Jack asks Freya if she's ever been tested on the machine. She tells him that she has never been in a situation where she might have been compromised by the Goa'uld. Carter stops. "What about Martouf?" she asks. He was on Earth while the S.G.C. was being tested, and while the Tok'ra were being tested back on Vorash.

Hammond enters the gate room, and introduces Per'sus to the President of the United States. Martouf's programming is triggered, and he begins firing with a Goa'uld weapon. Per'sus and the president duck for cover, and Martouf is shot in the leg. He keeps going, firing left and right, until his chest is riddled with bullets. Still, Martouf does not fall. Teal'c enters and shoots him with a zat gun to stun him – but Martouf remains conscious.

Carter orders them to stop as she enters the room with a zat gun. Martouf falls to his knee and moves to activate the device's self-destruct button. His face is desperate as he looks at her. "Samantha ..." he pleads. Sam shoots him with her zat, killing him.

The room is silent. Hammond reveals that this is not the real President – he is standing by on Air Force One, waiting for their signal. Freya promises that she will make sure Martouf's death is a noble sacrifice – he can be studied, so that they can learn how to combat the za'tarc technology.

Sam kneels on the floor, with Martouf's head lying in her lap.