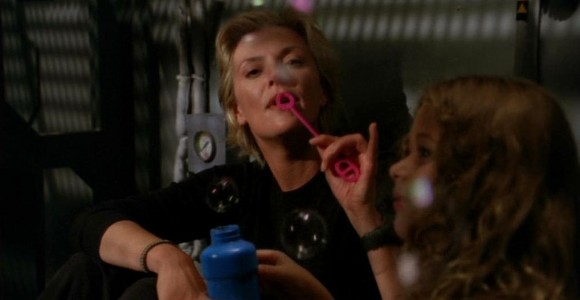 Carter is injured when the Prometheus is attacked by an unknown ship, and awakens to find herself stranded alone in deep space.

Review by Alli Snow and Arnise

Twinkle, twinkle little star, how I wonder what you are ...

For the purposes of "Grace," Sam Carter is that star, and the episode is all about what she's made of. Alone on board the Earth ship Prometheus after the rest of the crew is kidnapped, suffering a head injury, and visited by hallucinations -- some familiar, some not -- Sam does a lot more than figure out a technical problem. She also takes a very personal journey and perhaps comes to some conclusions about the direction of her life.

Although short on action, "Grace" still comes across as an intense episode: deep, thought-provoking, and multi-layered. Sam's conversations with her "inner voices" make up the meat of the episode, and the audience is left to decide for themselves just what each hallucination represented. What do your humble reviewers think?

Teal'c seemed to symbolize Sam's suspicion and fear, her warrior mentality. Early on he warns her against falling asleep because of her head injury. Later he hypothesizes that Sam's entire experience on the Prometheus, post-attack, is actually the result of the aliens probing her mind for information about Earth. His presence came across as almost threatening, definitely creepy, but it seems to be the biggest aspect that Sam and Teal'c have in common.

Similarly, Daniel seems to embody her scientific spirit and driving curiosity; he encourages her to stop searching for a way out of the quasi-nebula and study it, and he also comes up with the out-of-the-box theory that the nebula is a living being and the young girl is some kind of manifestation of its consciousness. Sam and Daniel are both scientists, and both have shown the willingness to put everything else aside to devote themselves to that calling. For Daniel it was "The Torment of Tantalus," for Sam "A Matter of Time."

If Teal'c and Daniel represented the more pragmatic side of Sam, the side we're most used to seeing, the visitations by Jacob and Jack ventured into the nearly-uncharted territory of Sam's emotions. This part of the episode began to delve deeper into the character, asking the all-consuming question: Is she happy with her life? Part of Sam says yes ... and part of her, symbolized by her father, doubts that. Perhaps Sam suspects that her somewhat solitary life has saddened Jacob and makes him feel that she's somehow failed him. Perhaps she genuinely wants someone else in her life and has been afraid to focus on that part of her life. The interpretations and possible implications are endless.

Sam's hallucination of Jack serves an important function. In both matters of the heart and in terms of her mission, he seems to serve as her confidence, her safety net. He appears -- the only figment besides the young girl not in some type of uniform -- and acts as Sam's motivation, if not the inspiration, to continue trying to save herself. Later, when the manifestations of Teal'c and Daniel express doubt that she can rescue the rest of the Prometheus' crew, Jack is the one to come to her defense and express his assurance in her abilities.

And as for the ever-contentious feelings between the characters, Sam seems to believe that she has been using her feelings for Jack -- someone she can't, because of regulations, pursue a relationship with -- as a reason not to pursue a relationship with anyone else. The hallucination seems to assert that he is, if nothing else, a safety net for her to fall back on. Is she right? Only time, and further episodes, will tell. But it does seem to your humble reviewers that after more than six years in the single life, Sam at least needs to explore her other options before she can decide, one way or the other, if Jack is truly the man for her.

Finally, who is Grace? A physical manifestation of an alien organism? A memory of Sam's own younger, more fun-loving self? Merely the nonsensical result of a bad knock to the head? We'd like to go with what's behind door number two, and hope that the experience has helped Sam rediscover that lighthearted, optimistic part of her personality.

What's good about this episode: Stylistically, this episode is solid. While it gets off to a slow start, the second half is chock-full of enough questions to fill megabytes of forum discussions. Writer Damian Kindler flirted with such miserably Trek-like notions as "sentient space anomaly" and "alien mind trick," then veers back into an original and satisfying story. The lack of music at specific points in the episode gives an appropriately eerie ambiance, and the recitation of "Twinkle, twinkle" is stunningly appropriate for Sam Carter.

The episode was "Jack-light," but because of the plot his absence made sense. And the final scene between Sam and Jack was a nice, rare bit of comfort to cap off a rather traumatic experience.

Finally, Amanda Tapping inarguably carried the weight of this episode, and she was brilliant. In a fair world, "Grace" would not be ignored by various awards committees, as too many fine Stargate episodes are annually.

What's not so good: As previously stated, the episode started off a little slow, and Sam's voice-over logs brought back memories of Dana Scully's X-Files reports ... which could or could not be a bad thing, depending on your taste. There is of course the fact that the episode focuses almost exclusively on Sam; critics may be dismayed at the lack of other characters. Then again, those who enjoy the character will no doubt keep a special place in their hearts for "Grace."

There are moments in the world of entertainment that can make a reader or viewer sit back on their heels, wondering exactly how it is their view of a character can be so completely different from the view of the writer. It doesn't happen to me often, and when it does I'm usually not that bothered. But this time it was Major Samantha Carter who was portrayed as someone I don't recognize, and, to be honest, I'm a little bewildered.

But I'm getting ahead of myself.

Every so often Stargate plays with their universe, moving away from the straight-forward mission episode to give us something a little more esoteric. In "Grace," Sam's concussive state created visions of her team and her father to represent various aspects of her personality.

It was an excellent set-up. It seemed that we were to be given a fascinating insight into Sam's deepest thoughts, aspirations, and fears, while at the same time see her struggle to save herself, the Prometheus and its crew from destruction. Sam's addled mind sparked in all directions at once, as if she'd lost all ability to focus on the issue at hand.

Teal'c appeared to her, representing her practical nature, pushing her on, not letting her sleep, making her fix the problem, warning of danger. Daniel represented her imaginative and inquisitive side in wanting to take the chance to investigate the nebula, and coming up with new ideas. Jacob represented her desires. Jack seemed to represent the obstacles in her path. And Grace? She appeared to represent the answer, the subconscious that comes up with solutions -- the bubbles.

It all sounded fascinating, and a vast improvement on the previous two episodes this season in which Sam was the main SG-1 character. Grace really was all about Sam.

If you can feel a "but" coming along, give yourself a pat on the back. There are several things about "Grace" that I wasn't impressed with. The Star Trek references were blatant and unwelcome. Lines such as "they're scanning us," "re-route auxiliary power to shields" and "initiate evasive maneuver delta" were things I thought I'd left behind me with Captain Picard, Captain Janeway, et al, along with exploding consoles on the bridge (has nobody heard of fuses or surge protectors?) and warp ... er ... hyperspace bubbles.

Once Sam was alone on the Prometheus, the episode had a chance to improve, to regain its originality. Instead, it turned into something that was a bit dull. Carter's record of her situation, the wandering around the ship, the various ideas that her subconscious (i.e. Daniel, Teal'c and Grace) presented her with, while a nice representation of how a concussed brain might function, didn't really get us very far.

The biggest issue I have with "Grace" is that the potential insights we could have been given into Carter's character were reduced to one thing: her love life. Are there really no other aspects of Sam that could be explored during a look back on her life? Why doesn't she have her own command by now? Does she still struggle to reconcile her scientist side with her soldier side? How has she dealt with the merging of her memories and Jolinar's? Does she have a team of scientists working for her at the S.G.C.? Is she frustrated that she can't discuss physics with the top minds in her field? How much time does she spend with Cassandra? Is Cassandra an acceptable substitute for her own child?

We don't know any of these things -- and yet, if this episode is to be believed, Carter is dissatisfied with most of those areas and would be happy to give up her career in return for a "chance" of a relationship with her commanding officer.

Being hit over the head with a rather large sledgehammer labelled "Major Carter: not the respectable professional you thought she was" was a shock. Carter apparently has romantic feelings for her boss. Where did they come from? Last we saw of anything remotely resembling that situation was way back in Season Four (which was a surprise in itself at the time). Those "feelings" were "left in the room" at the end of "Divide and Conquer," both parties moving on. But now we discover she's been ignoring one of the basic U.S.A.F. rules for years and pining after her C.O.

The implication, of course, is that a rational, responsible adult (as Sam has always been portrayed) couldn't make a simple decision: either move past her feelings or transfer to a different SG team to be able to act on those feelings. Either action would have been acceptable and in keeping with the Sam that we know. Instead, we're left with a woman who apparently can't make a simple adult decision, the likes of which men and women make every day all over the world.

And those complaints don't even touch on how disturbed I am that now, after years of getting to know Sam's strength and individuality, of understanding how proud she is of her accomplishments, of how happy she is in her life, we discover that lurking under the surface was the "fairy tale" truth: all she really wants is to give it all up for a man. Farewell sexual revolution, we shall miss you.

Was there anything at all to praise? Sure. Amanda Tapping's portrayal of an injured and confused Sam was skilled. I liked the atmosphere on board the Prometheus, the quiet, the way characters popped in and out of existence as Sam's mind moved on. I liked the way Daniel and Teal'c were reassuringly eager to search for Sam and the Prometheus, though I was puzzled by Jack's reluctance.

In the end there wasn't a great deal that impressed me in "Grace." I can only hope that poor Sam will be redeemed at some later date.