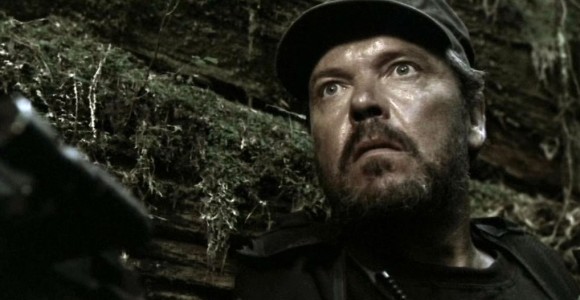 Colonel O'Neill is trapped on an alien planet with Maybourne, and must fight to stay alive as his companion becomes increasingly paranoid.

Colonel Jack O'Neill receives an unwelcome visitor to his back-porch barbecue: Harry Maybourne, who formerly ran an illegal N.I.D. operation to steal alien technologies from other worlds, and who is now on the run from the law as a convicted traitor. Maybourne has used his connections to help out O'Neill over the past two years, and now has an enticing offer.

Maybourne tells Jack that he knows about the Prometheus incident – Frank Simmons stole the ship to find a repository of the Ancients' weapons and technology, which an N.I.D. team learned about after discovering a tablet written in the language of the Ancients on another world ("Prometheus"). Maybourne says that this planet has a Stargate, but hijacking the X-303 ultimately proved easier for Simmons than taking and holding the S.G.C. to use the gate. He tells Jack that he has the address to this planet, and the key that will unlock the energy barrier guarding the cache.

In exchange, he wants a full presidential pardon. O'Neill reluctantly agrees, for now, and Harry turns himself in to the S.G.C. The team visits the world without him, and his story checks out – it's a deserted world with signs of highly advanced technology. But the arch discovered in a small, stone structure is not Ancient in origin; the writing indicates that the technology it conceals is that of the Furlings, another member of the old alliance of advanced alien races ("The Fifth Race").

Maybourne delivers the key to O'Neill, but tells him that only he knows the combination to make it work. General Hammond and O'Neill are reluctant to allow him to go along on the mission, but the promise of finding a stash of advanced technology convinces them. Harry suits up and joins SG-1 on the trip.

But once they arrive at the ruins, he double-crosses them. Maybourne pretends that the key does not work, and when Samantha Carter steps over to look at it, he takes her zat and stuns her – then fires at Jack. Maybourne activates the arch, and an energy field appears. Then he removes the key and leaps into the field – but Jack tries to grab him, and they both disappear. Sam is left alone.

She returns to the S.G.C., and brings back a team of scientists to study the technology and try to find O'Neill and Maybourne. Carter correctly theorizes that it is a transportation device, which could have sent them anywhere on the planet. A U.A.V. is sent up to survey several kilometers around the gate, but the search comes up empty.

Maybourne and O'Neill find themselves in the middle of a field. As they hike into a beautiful valley, Harry explains himself. There is no weapons cache, at least not on this planet. He used it as a ploy to convince them to let him come here. The key device was found on Earth, wrapped in a scroll telling of an alien paradise and inviting others to join. Maybourne is here to find this colony, and retire there.

He and Jack do find the village spoken of – but it appears that no one has been there for centuries. All the inhabitants of the alien paradise are dead, and their skeletons litter the run-down buildings. With no way to return (or to even find out where they are), they set up camp and do their best to survive until they are rescued. O'Neill tries to get along with Maybourne, though his old nemesis doesn't make it easy.

After a week of studying the Furling arch, Dr. Lee and the scientists are ready to pack it up and go home. Carter is insistent that they stay, but they refuse. The S.G.C. also contacts the Tok'ra, who fly over the planet in a ship. The Tok'ra Jollen reports that he scanned the entire planet and found no human life signs present.

Back at the deserted village, Maybourne has begun to behave more and more paranoid. He claims to hear things in the night, and demands that Jack give him his pistol. O'Neill refuses, and Maybourne storms off.

After a few days, Maybourne disappears altogether. O'Neill begins to theorize about what happened to this paradise, and starts counting the bodies. In one, he finds a dead, dried-up Goa'uld symbiote. Growing more nervous and paranoid himself, Jack looks for his hidden P-90 -- and discovers that it's been taken. Pistol in hand, he goes looking for Maybourne.

On Earth, Teal'c finds Major Carter alone in the dark, weeping. She feels responsible for Jack's disappearance, having allowed Maybourne to take her weapon. She's also powerless to do anything to find him, and tells Teal'c that it feels just like when they lost Daniel ("Meridian").

O'Neill hunts for Maybourne, and steps into a booby trap. A grenade explodes as he leaps for cover, and shrapnel stabs into his leg. Jack turns to see a wild boar charging him, and shoots at it. It squeals and runs away ... but when Jack follows it, he finds Maybourne instead – shot in the side. Harry claims that he set the trap for the pig, and the two train their weapons on each other.

Believing Maybourne to be out of his mind, O'Neill returns to the village. But Harry soon attacks him, believing that Jack is trying to kill him. As bullets rain down from the P-90, Jack shouts an explanation to try to get through to Harry. The plant they've been eating to survive is messing with their heads; everyone here killed each other. One of them was a Goa'uld, and probably brought the plant to try and enslave the utopians, since the Furling transporter screens out Goa'uld weapons.

Jack manages to sneak up on Maybourne from behind, and orders him to drop his weapon. When Maybourne turns to shoot instead, Jack shoots him.

On Earth, Jonas shows Sam and Teal'c a photograph of the alien key device. As they review video footage from the planet, Carter spots the planet's giant moon hanging in the sky. It wasn't visible after the first day, so she'd forgotten about it. Based on the engravings on the device, she surmises that O'Neill and Maybourne weren't transported to another place on the planet – they were sent to that moon.

Maybourne wakes up to find Jack sitting near him, tending a camp fire. The effects of the plant have worn off, but Maybourne won't survive his injuries if they don't get out of there soon. Jack isn't worried – a Tok'ra ship flies overhead, coming to their rescue. But Harry tells him that he'd rather die there than go back to Earth and live out his life in prison. Jack, however, offers to have the Tok'ra find him a nice planet on which he can settle down and retire.