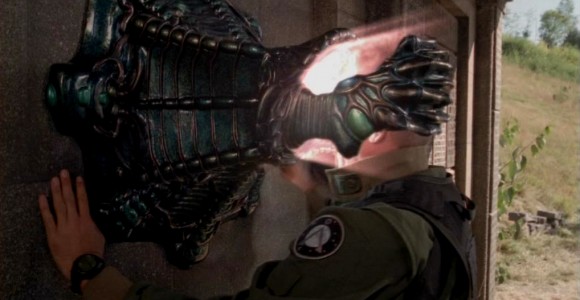 O'Neill goes to great lengths to keep the Ancients' knowledge from falling into Goa'uld hands when the team discovers a second repository. Meanwhile, the President replaces General Hammond with a civilian diplomat.

It's fairly common knowledge that "Lost City" parts one and two were initially meant to serve as the Stargate SG-1 movie -- either on the big screen or the small -- should an eighth season not have been granted by Sci-Fi. Because of this, both parts of the episode invite us to look at the Stargate universe through the eyes of someone less familiar with the program. Had this script (or some variation of it) made it to movie-hood where the uninitiated would have been a target audience, what would it tell them about our favorite show?

In terms of plot, part one is written to include those viewers who might not have been with the show since "The Fifth Race," the plot of which is summarized through several references. The gravity of the situation is also impressed upon the viewer -- intelligence strongly suggests that Anubis has finished entertaining himself with any potentially threatening Goa'uld and is plotting a course for Earth.

The episode is also peppered with scenes that define the characters, specifically Jack: his determination to finish the crossword and win a bet with Sam, his cell phone antics, his reaction when Daniel tries to rush the Ancient device, the team gathering at his house and his goodbye to Teal'c. At the close of another Jack-light season, it's refreshing to see him at his best (even if he does shave way too quickly). We as fans don't need these moments as much as unfamiliar viewers would, but that doesn't mean we don't appreciate them.

While SG-1 and their cohorts scramble to defend the world yet again, political contortions continue in Washington as the President gives in to Kinsey's insistence for regime change at the S.G.C. -- to a degree. Dr. Elizabeth Weir is a civilian, is anti-military (or at the very least not pro), and the Vice President would very much like her in his back pocket. However, his failure to convince Woolsey to remain loyal ("Inauguration") is compounded here; Weir is suspicious of his motives from the beginning and pushes back when she feels as though she's being used. All we can say of Weir at this point is that she's an interesting character, not two-dimensional in the least, and worthy of our time -- even if she can only speak five languages.

Part one of "Lost City" is slow, an obvious set-up for more excitement to come in part two, and primarily concerned with establishing characters -- new and old. We find that President Henry Hayes has settled into his new role with a comfortable air. We learn that Jack's interest in The Simpsons is something he shares more with Siler than any member of his team. And -- if we didn't already know -- we learn that there is a certain something between Sam and Jack that's cause for awkwardness, even after all these years. The fanon ("fan canon") assertion that Daniel is a cheap date appears to be confirmed, and Teal'c is, quite simply, deep.

Perhaps the most shocking thing in this episode is the fact that Hammond is replaced, and that he goes down without any perceivable righteous anger at the fact. The change is foreshadowed -- even stated outright -- from the very beginning, but still it's difficult to imagine an S.G.C. without George Hammond at the helm. It was nice of Bra'tac to notice and be concerned.

It's always difficult to judge the first half of a two-part episode on its merits alone, especially when the two halves are so obviously a duo (not, for example, like Season Six's "Prometheus" and "Unnatural Selection," which had such disparate stories that they were a two-part episode in name only). But "Lost City, Part 1" serves its purpose famously. It hooks our interest, sets up a life-threatening conflict, and further endears our heroes to the audience.

With this fourth two-parter of the season, another year of Stargate is drawing to a close. And while this episode brought with it some great character moments that have been missing all too often this season, the finished product was not quite as coherent as I would have liked. Despite that, the feel-good factor was very much in evidence, with the build-up of tension and anticipation to what surely must be a victory for SG-1.

The best moments in "Lost City" were those that showcased the things that we love about these characters we know so well: Daniel's determination to use the Ancients' device to save the knowledge within it, and Jack's determination not to let him, pouncing almost before Daniel had made his move. Jack's sacrifice, knowing that it had to be done, and trusting his team to save him -- if it's at all possible. In fact, the whole sequence on the planet was classic Stargate, with the team together in comfortable roles, some high tension, and SG-1 being chased and shot at by Jaffa.

There was more team and togetherness at Jack's house, with banter, closeness, and each of them caring about one another. The last time I saw a team so at ease with one another was SG-13 in "Heroes," and it was heart-warming. Contrast that caring with the sheer entertainment of the spark and snark that defined Jack and Kinsey's interaction in the briefing room. And then we were pulled along to the final scene of Teal'c leaving, thinking he may never see Jack again -- and the tenderness between these two men, two warriors -- was incredibly moving.

As emotional roller-coasters go, this first half of "Lost City" has more than its fair share of sharp bends and stomach-lurching drops. But the highs and lows weren't as smooth as they could have been.

For example, after seven years I would expect that Jack and Sam would be able to have at least one off-duty conversation that wasn't awkward. By now they must surely be able to talk without having to struggle for words. If the few moments where Sam was alone with Jack were anything to go by, apparently they still can't relax in one another's company. The easy and amusing way Daniel first knocked on Jack's front door, then opened it and wandered in only served to highlight the air of awkwardness even more. Thank goodness Daniel and Teal'c arrived before the military pair were reduced to talking about the weather.

There's a deeper concern running through this episode, however. While Jack's behavior in the early part of "Lost City" seems out extremely out-of-character, his lack of interest in an urgent mission (and his peculiar focus on a crossword), and the way he kept the team and General Hammond waiting, seem to add to signs that have niggled during other episodes this season. Is Jack depressed? Is he simply fed up of having the weight of the world on his shoulders? Is he finally done with all the fighting and wants this to be over? Did he download the Ancients' knowledge as an excuse to give up on life?

It's possible. I'd rather not have to think that, but with such a complete dismissal of the importance of his job and his wasting everyone's time, either there's something very serious going on in Jack's life or ... it's shoddy writing.

On the writing theme, one thing I can't abide is Jack's idiot act. The first briefing scene was rather heavy-handed in the exposition department, making use of Jack-the-oblivious in an attempt to hide the exposition behind an old and familiar joke. It was only partially amusing the first time this device was used, and these days it's simply irritating. Jack is not stupid. He's at his best when he's a competent leader. And flip-flopping him between one state and the other merely leaves the poor audience thinking the man has a multiple personality disorder. Please, stop it!

On to the new character: Dr. Weir. President Hayes, likeable as he is, always has one eye on the way the public will view him and his actions. Bringing in a civilian to head the S.G.C. is a nice twist. And while my first impressions of the good doctor were that she was completely out of her depth, by the time the episode was over she had found at least some solid ground and was rediscovering the kind of self-confidence she must surely have had in her previous role.

I seem to have covered more areas of concern than I expected to when I began this review. While there were faults, "Lost City, Part 1" brought back a feeling of old-time Stargate, where the team worked together and an undercurrent of excitement permeated the story. The effects were great, as ever, with special mention going to the Ancients' device, the enormous statue, and the Jaffa attack.

The verdict? The overriding feel-good factor means that this is a promising start to what could turn into the best of this season's two-parters.