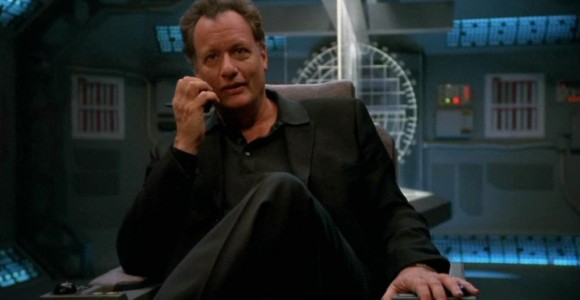 A news reporter threatens to expose a top-secret military project, but when Carter and Jonas give her a tour of the X-303, they discover that she is a pawn in a much larger plot.

Major Samantha Carter is approached by a news reporter as she gets into her car. The woman, Julia Donovan, has a source who has provided her with information on a top-secret government project, code-named "Prometheus," and wants Carter to comment on it. Sam tells her nothing, and leaves.

At the S.G.C., she tells General Hammond about her encounter. He learns that the story is due to run in four days, and sends Major Paul Davis from the Pentagon to speak with Donovan. Davis finds her in a limousine, and introduces himself. He tells her that running her story would put people in danger, and that her source has broken about a dozen federal laws in leaking information to her. He recommends that she not run the story, but Donovan isn't phased.

But she soon finds Davis and Carter at her office, speaking with her producer, Al Martell. The President of the United States has asked the owner of the network to kill the story, and the producer has agreed. Donovan threatens to take it to a foreign news agency and get the story out anyway, but the producer strikes a bargain with the government. They'll turn over all information and records on Prometheus, in exchange for a tour and full disclosure. When the government eventually decides to go public, they get a world exclusive.

The government agrees, though Hammond later tells Sam that they plan to double-cross the press. The producer has agreed to reveal their source after the tour – at which point the government will destroy all the news agency's records. The important thing is to find and plug the leak, so that this doesn't happen all over again.

Carter and Jonas meet Donovan and Mr. Martell outside the entrance to a top-secret, highly secure facility in the Arizona desert, where the Prometheus project is in development underground. Along with four crew members (cameramen and technicians), they enter an elevator and head down into the facility. Carter introduces them to the Prometheus, also known as the X-303 – a massive spacecraft built by the United States military. It is equipped with Earth's first working hyperspace generator, making it capable of interstellar travel.

The ship isn't finished, but Carter and Jonas give Donovan and Martell a tour while the cameramen set up on the bridge. They're watched by a pair of guards, who are quickly dispatched when the cameramen pull out a zat gun and pistols from hidden compartments in their equipment. The woman technician, Jones, quickly accesses the computer.

On the engineering level, Carter spots a problem with the computer and heads back toward the bridge. She meets the three men in the corridor, and barely escapes into a storage closet. But the men lock her inside, and head for the engine room. They find Jonas, Donovan and Martell, but learn that Jones has lost computer control on the bridge. Jonas realized what was happening when the engines came online, and put the computer into a diagnostic mode – removing and hiding the ship's primary control crystal.

But the producer is in on the hijacking, and recovers the crystal for his associates. They're paying him a lot of money, Martell tells Donovan. Computer access is restored, and Jones begins to overload the powerful hyperspace engines.

The hijackers radio their demands to the surface, where Major Davis and Colonel O'Neill wait at a makeshift command post. They demand the release of two military prisoners: Colonel Frank Simmons, formerly of the N.I.D., and the Goa'uld who has taken billionaire Adrian Conrad as its host. If their demands are not met, they will blow up the hyperspace engines, causing an explosion powerful enough to wipe out most of Arizona.

With no alternatives, Simmons and Conrad are brought to the facility and sent inside. The Goa'uld works in the engine room to make the ship capable of hyperspace travel, while Simmons takes command on the bridge. Jonas and Donovan are held hostage, while Sam has managed to assemble a transmitter and communicate with the surface. Major Davis tells her that she can disable the ship's power from a panel just one deck above her. She uses a torch to burn her way through the sealed trinium door.

Colonel Simmons tells Davis to retract the roof, and he is forced to consent – allowing the ship to take off. Sam escapes her prison, and heads for the next deck as the ship climbs through the atmosphere. Teal'c and O'Neill take a glider (recently taken from Anubis' mothership ["Descent"]) after the Prometheus, following them into space and boarding through the launch bay.

Carter shorts out the panel, causing the ship to lose power. But the Goa'uld finishes the hyperspace engine, and Simmons orders that they open a hyperspace window – shooting the ship light years away from Earth.

O'Neill and Teal'c arrive to save Carter from a pair of hijackers, and the three proceed to the bridge. But Adrian Conrad gets their first, and attacks Simmons. He has no more use for him, and wishes to take control of the ship. The two men struggle, and Simmons shoots Conrad dead.

Sam makes it to the bridge, but Simmons confronts Teal'c and Jack in the corridor. His eyes glow as he attacks them; the Goa'uld has taken him as a host. He beats them both handily, and moves to finish off Teal'c. But the ship exists hyperspace with a jolt, and O'Neill leaps to a control panel on the wall, entering the code to open the outer doors. Simmons is sucked out into space, and the doors are resealed.

With the hijacking averted, an injured Jones explains things back on the bridge. During Colonel Maybourne's rogue Stargate program ("Shades of Grey"), an N.I.D. team discovered a tablet on an alien world, with writing in the language of the Ancients. It described a vast depository of the Ancients' weapons and technology, but it took the Goa'uld in Adrian Conrad to decipher the coordinates. The Prometheus provided them with an opportunity to get there.

But now that they've arrived at the coordinates, there is no planet to be found. And without knowing where they are, Carter tells Colonel O'Neill that she can't plot a course for home.

But that's the least of their problems, as an Asgard battleship suddenly arrives. Commander Thor transports aboard, and asks for their help. The Replicators have overrun the Asgard homeworld, and Thor needs SG-1 ... and their ship.