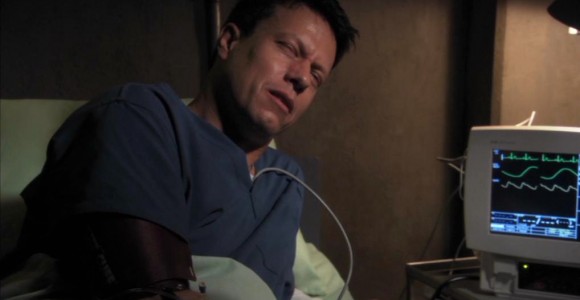 "Who shot me?"
- Daniel Jackson

Last week's premiere two-parter, "New Order," was a busy little episode, wrapping up matters from last season and setting the tone for the rest of this year. In a nice feat of continuity, "Lockdown" continues the trend, with a certain undeniable flair, but sadly not with as much dramatic style.

More than anything else, "Lockdown" can be described as busy. There are a lot of things going on, several new characters, a whole bunch of talking, plenty of running, quite a few instances of Daniel getting shot, and the eternal question: Just who is the bad guy hiding in now? But the main crux of the episode was to showcase just what kind of leadership the S.G.C. can expect from General Jack O'Neill. The repeated Daniel-shooting was merely an added bonus.

After years of being an off-world kind of guy, grumbling about writing up his mission reports (or was that just in fan fiction?) and apparently forgetting the fact that he had a desk as a Colonel, Jack now has a very different set of problems. How does he deal with international pressure? Who, if anyone, will he choose to be his replacement on SG-1? And, for the love of God, will the base be able to handle the change from mashed potatoes to French fries?

But this spud setback -- and any other memos Jack missed along the way -- is swiftly placed on the back burner when a much larger problem is discovered: there's a Goa'uld on the base. Not the normal kind of Goa'uld, but a Goa'uld nonetheless.

What do we learn about General Jack? Not much that we didn't know about Colonel Jack, but here we see it in a different context. The man knows how to delegate, is able to stare down insistent Russian Colonels, and he can bluff non-corporeal bad guys into rash action. He's also in no rush to change from BDUs to the more formal attire habited by Hammond, and judging by the pile of papers on his desk he could use a secretary ... or at least a filing system.

While the plot was solid -- a new twist on an old Stargate story, so to speak -- the emotion that was so close to the surface in "New Order" simply wasn't present this week. Part of this is the obvious comparison to last week; I thought "New Order" was just that good. But the other part is that "Lockdown" asks us to become emotionally invested in a slew of new characters, specifically the Russian Colonel Vaselov.

Daniel and Sam express a great deal of concern for Vaselov's plight and dismal prognosis, and while that's very humane of them, my suspicion early on that he was a throw-away character prevented any real connection from taking place. Sure, he seemed like a nice guy, and he certainly did a courageous thing in the end. Yet, a week from now, no one is going to be left thinking, "Man, I really miss that Vaselov."

The other new face that was bound to be high-profile was that of Dr. Brightman, Janet Fraiser's presumed replacement, who could probably give Orlin a run for his money in the "No Personality Whatsoever" competition. Again, it is a matter of comparisons. Almost anyone would look tepid next to Teryl Rothery's portrayal of Janet, and a bubbly, power-mongering, extra-feisty new CMO would no doubt lead to calls of ... well, you remember the whole Jonas debacle. Still, I hope that if Brightman returns she's able to bring something to the cast, and not simply fill a technical hole left by the indomitable Dr. Fraiser.

So, what we know now: Unless Anubis has a way of getting his Ruskie-sicle body off that ice planet, SG-1's quasi-Ancient foe is contained for the foreseeable future. With any luck, Jack will have time to mend fences with the President and get back to that pressing potato problem before next week's escapades.

What we don't know: Will a 3-man (pardon: 1-woman, 2-man) SG-1 really prove feasible, or will the temptation to put characters into pairs simply be too much? And speaking of feasible, just what kind of smorgasbord can Teal'c expect at his apartment-warming party?

"Lockdown" is a nice continuation from the premiere, but on the whole it does not have enough emotional drama to put me on the edge of my seat.

One of the foundations of Stargate SG-1 is the idea of humans controlled by alien beings, which means that despite the derivative use of the old "possessed by aliens" shtick, "Lockdown" really works. This is one weird twist on the concept of being taken over by a Goa'uld, and that's what elevates the story from what could have easily become a run-of-the-mill and forgettable episode.

It's not just the turns that the plot takes that keeps "Lockdown" interesting, it's the look and feel of the episode. Will Waring gave an extra spark to the direction this week, moving the camera around to give stationary scenes more life -- particularly during the preparation to flush Anubis out -- and adding more energy to usually dull scenes of running up and down corridors. Kudos goes also to the steadicam operator, who did a sterling job.

Speaking of Anubis, is anyone surprised that he's not dead? Will he now follow in Apophis' footsteps, becoming ever more difficult to kill? I hope not. While he had the potential to be a formidable bad guy due to his powers as an at least partially ascended being, as Daniel has pointed out he can't use those powers without the Ancients coming down on him like a ton of bricks. And that makes him less powerful than he could have been. The behavior of the Ancients is inconsistent, though. Daniel was not prevented from helping Jack during his time as Baal's prisoner, nor was he prevented from helping Teal'c. What makes Daniel so sure the Ancients will intercede when all Anubis is doing is traveling from Earth to another planet? The back-story isn't strong enough to support this, and thus made for a weakness in the plot.

While we're on the subject of inconsistencies, it would be nice if the zat could have the same effect on everyone each time it's used. While various security personnel and other folk were knocked out by one shot, Daniel wasn't. It's a weapon whose effectiveness depends on the needs of the plot, and while I'm used to it by now, it sometimes grates. It grated here.

New characters crawled all over "Lockdown." Major Kearney was a good supporting character of whom I'd like to see more. I missed our favorite Chevron Guy, though he wouldn't have had a great deal to do. Still, it's odd to see someone else sitting in his chair. Colonel Vaselov was a fascinating man who would have been an interesting addition to the S.G.C. Sadly, that's not to be. Failing that, Vaselov's sacrificing of himself to save the S.G.C. -- and Jack in particular -- is something that should have quite an effect on the general, whose dislike of Russians is ingrained and extreme. Will we see Jack's reaction next week? Perhaps. It was only one missed character moment, however, in an episode that had a nice sprinkling of them.

The new doctor popped her head above the parapet in a way that made me miss Janet Fraiser all over again. It was never going to be easy to replace a beloved character, but the opportunity was missed to create someone interesting and original. A white female doctor with attitude was replaced by what seems to be a bland reproduction. There's a difference between detached professionalism and a lack of emotion, and Brightman tipped the balance in the wrong direction. Perhaps she'll grow on me.

Due to financial constraints this season, it's been reported that we'll be seeing more episodes set at the S.G.C. rather than off-world. The changes that Stargate has gone through over the years, evolving from a show about exploration of other worlds and dealing with other cultures (be they allies, enemies or something in between) into a show primarily about a war with the Goa'uld has inadvertently laid the groundwork for this kind of Earth-based episode. However, if they're all as interesting and dramatic as "Lockdown," those limitations will hardly be noticed.

While the premise of the show has shifted quite considerably, the characters are still eminently recognizable. Jack's frustration with his paperwork, and his ability to be an "equal opportunity offender" are the same. Sam's respect for her commanding officer seems to have grown, but it was nice to see Jack bringing her back down to earth. It's also refreshing to see Sam being a professional with none of the undercurrents of inappropriate crush that ran through too much of the last season. Long may it continue.

"Lockdown" didn't give me the "Wow" feeling as I watched it. Those episodes come once or twice a season ("The Fifth Race," "Orpheus," and "Abyss" are prime examples). But it's fairly high on the list of episodes to rewatch, and I'm encouraged once again by the quality of the new season.