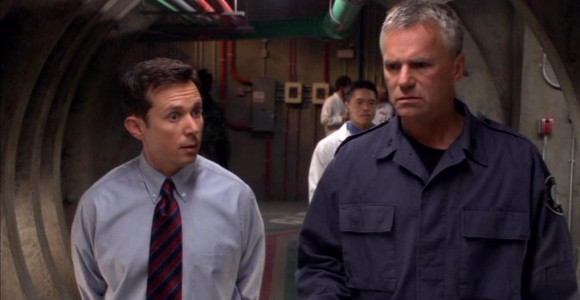 Over the course of seven years, SG-1 have had their fair share of adventure -- battling evil aliens, helping oppressed off-worlders, occasionally saving the world for good measure. But no matter what, when all was said and done, they would always return to Stargate Command to find the ever-calm General Hammond there to welcome them back. And I would always wonder -- "What does Hammond do while SG-1 is away? How does he spend his days?"

Well, with O'Neill finally receiving his promotion this season, we finally got the chance to answer those questions as we explored "A Day in the Life of General O'Neill." Well, that was the working title anyway, but Robert Cooper felt "Zero Hour" would be more appropriate. I don't know. I kind of liked "Day in the Life ..." Of course, I'm the same guy who wanted to call Season Five's "Enemies" "Serpent's Hat."