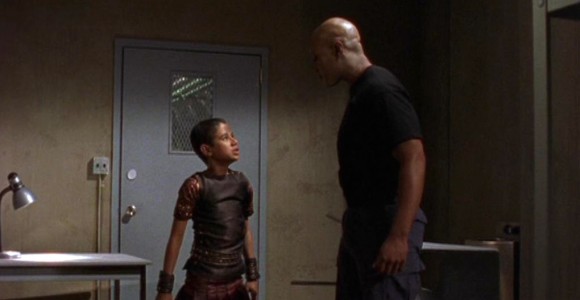 The SG-1 team attempt to rescue Teal'c's son, who has been kidnapped and brainwashed by Apophis. Teal'c learns disturbing news about his wife.

Bra'tac, Teal'c's old friend and former Jaffa master, arrives at the S.G.C. with some unfortunate news. The System Lord Apophis is alive, and has taken Teal'c's son Rya'c.

SG-1 returns with Bra'tac to the planet Chulak, where Teal'c sees his wife Drey'auc again for the first time in a year ("Bloodlines"). But he learns some disturbing news about her. Wondering if Teal'c was ever coming home, and in order to escape the camps (where she was an outcast) and provide a normal life again for Rya'c and herself, she has married Fro'tak, Teal'c's close friend. Teal'c is enraged, and his friends must keep him from declaring an oath of revenge against Fro'tak.

Along with Bra'tac, SG-1 infiltrates the local palace of Apophis to free Rya'c. They locate him and eliminate the serpent guards – but when Teal'c moves to embrace his son, Rya'c calls him a traitor and cries out for help. More guards converge on their position, and the team is forced to flee, leaving Rya'c behind. The young boy has been brainwashed by Apophis, in order to punish Teal'c for his betrayal.

Back at the home of Fro'tak, the group watches a broadcast of Apophis and Rya'c. The boy claims that his mother has been captured, and calls his father Teal'c a traitor. Apophis puts a price on their heads, and the Jaffa warriors of Chulak come looking for SG-1.

Teal'c learns that Drey'auc does not love Fro'tak, but is still in love with Teal'c. As they fall back into one another's arms, Fro'tak sees them kiss. Himself betrayed now by his new wife and old friend, Fro'tak steals away into the night to report the location of SG-1 to Apophis's guards. O'Neill follows him, however, and is forced to kill him to keep their secret.

SG-1 intercepts Rya'c the next day, as a group of Jaffa move him to a new location. They subdue the guards easily – too easily, they believe – and return to Earth with Drey'auc and Rya'c. The boy is examined, in case he might be planted there by Apophis to destroy Earth or the Stargate (as Cassandra was used by the System Lord Nirrti in "Singularity"). But Rya'c is clean, with no trace of naquadah in his system.

But Rya'c's mother notices that his two missing teeth are no longer missing. The boy is subdued after it is discovered that he has not triumphed over Apophis's brainwashing – he is still a plant, on a secret mission for his "god" Apophis. The teeth are discovered to contain biological organisms. Rya'c was to make it outside the mountain to the surface and bite down hard, breaking the false teeth. The combining of the organism would cause a biological weapon to spread throughout Earth, killing every living thing on the planet in less than a week's time.

The group determines that the only way to overcome Apophis's brainwashing is to subject Rya'c to electro-convulsive therapy – shock treatment. Teal'c fires a zat gun at his son, who suffers great pain as a result. But he is freed from Apophis's control, and all is well.

Teal'c escorts his wife and son to a distant planet, where they can hide safely from Apophis and the Goa'uld.