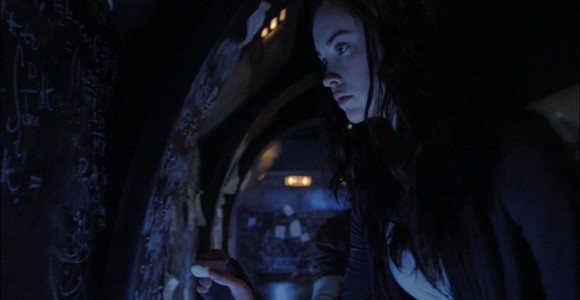 Chloe's increasingly erratic behavior leads the crew to suspect that she may be under alien influence. Eli returns home when he learns that his mother has fallen ill, and Camille finds Sharon struggling in her absence.

Eli Wallace finds Chloe Armstrong studying a control console. She snaps out of what appears to be a trance-like state, and doesn't remember how she got there. As Eli chatters on, she abruptly leaves. He finds her boyfriend, Lt. Matthew Scott, in the Mess. They discuss her oddly quiet, withdrawn demeanor and the miraculous healing of her gunshot wounds ("Intervention"). Colonel Everett Young interrupts. Eli's mother has been hospitalized with H.I.V.-related pneumonia and depression.

Swapping bodies with Airman Tracy using the Ancient communication stones, Eli introduces himself to his mother, Maryann Wallace, as a "friend" of Eli's. He attempts to convey how significant Eli's top-secret work is, how much Eli misses her. She dismisses him, noting she isn't important enough for Eli to call or visit in person.

Camille Wray also visits home. As she catches up with her partner, Sharon Walker, Wray notices how much Sharon is drinking now.

Meanwhile, on Destiny, Dr. Nicholas Rush is on the Bridge, trying to manipulate the ship's countdown clock. He drops the ship from F.T.L. flight. He looks to the clock display, and expresses his frustration that he isn't getting the desired results. Dr. Franklin appears to him again, telling Rush that controlling the clock isn't easy – there are a lot of variables involved. In the Control Interface Room, Dr. Lisa Park and Adam Brody dutifully inform Rush by radio that Destiny has again dropped out without proximity to any Stargates.

As Matt and Chloe lie awake in bed, Matt asks her where their relationship is at, confessing that he is afraid of doing something to ruin what they have. Chloe attempts to reassure him, even as she turns inward.

As Colonel Young listens to MSgt. Ronald Greer complain about the Lucian Alliance prisoners being allowed out into the ship's general population, Lt. Vanessa James opens the prisoner hold. Each prisoner is assigned a guard to escort them. Scott interrupts them with news that Chloe is missing.

Trouble begins immediately as Simeon enters the Mess and whispers something offensive into Park's ear. She is shocked, and Dr. Dale Volker and Brody leap to her defense, Volker demanding an apology. Lt. James, who has been talking to Tamara Johansen, tries to calm everyone. Greer pins Simeon to the wall and sends him back to confinement, even as he instructs Destiny's personnel to search for Chloe.

Some time after Destiny jumps back to F.T.L. flight, James and her search team locate Chloe in a dark storage room, trying to open a locked case. Again, she has no idea why she is there. As T.J. examines her, Lt. Scott indicates that these blackouts are not new. Leaving Chloe in the Infirmary, Scott returns to their quarters.

Reluctantly, he opens Chloe's personal diary to find a progression from pages with recognizable writing to pages full of Ancient letters mixed with the script he recalls from the blue aliens' downed ship ("Lost"). He shows the diary to Young, Rush and T.J. As far as their limited equipment can tell them she is free of any implanted technology, leading Rush to speculate that she may be changing on a cellular level, the result of some sort of genetic manipulation. He suggests supervised freedom for Chloe might help them understand what the aliens are doing to Chloe, rather than simply confining her and learning nothing.

In addition to Chloe, Young must deal with Simeon. Accepting the man's promise to behave, Young restores his conditional freedom. Varro also confronts Simeon, who is surprised that all the others Alliance prisoners have actually been truthful about information shared with Homeworld Command. He's been lying. Varro tells him to fall in line, and start working on fitting in on board Destiny.

Back on Earth, Eli tries to explain the Stargate program, Destiny, and the stones' body trading to his mother. He tells her that even though he looks like someone else, he is Eli. She turns away in disbelief and despair. He is afraid she's giving up on life. He calls Wray who has similar concerns about an anxious, despondent Sharon.

When Rush takes a turn supervising Chloe, he leads her to a corridor he calls his place for study. The walls are covered with papers and mathematical formulae. He lets Chloe examine the equations. She fixates on a particular set, writing down the solution even though she does not understand it. Eventually handing her back to Scott, Rush makes a beeline for the Bridge.

Destiny again drops from F.T.L. flight as Rush attempts to apply his new-found information. In the Control Interface Room, Brody and Park tell Young about how the ship is dropping out of F.T.L. at places where there are no gates to dial, and then altering its course. Coincidentally, whenever this happens Rush does not answer his radio. Certain that Rush is behind this, Young confronts him when he ambles in. With seeming reluctance, Rush takes them to his study corridor, showing them the equation Chloe solved. He believes the aliens who attempted to take over Destiny ("Space") are studying them and the ship through Chloe. The others assume she is responsible for Destiny's odd behavior. Rush does not dissuade them, keeping his knowledge of the ship's bridge a secret.

Colonel Young decides to sequester Chloe. She tells Matt that she feels like she is slipping away, bit by bit. T.J. observes Chloe on the video feed, pointing out to the Colonel moments when she enters a trance and sits upright on her bed, just staring at the wall. While she may pose a risk, Young and T.J. agree that quarantine is not a long-term solution.

Camille, still on Earth, finally faces Sharon's deteriorating emotional condition. While Sharon longs for the sounds of Wray's voice, her smile, her touch, Wray tells her that these visits – no matter how short – give her the hope she needs. Imperfect as they are, their time together keeps Wray going.

Unable to persuade his mother that he is who he says he is, a panicked Eli calls Wray. Drawing on Eli's importance to Destiny, Wray uses her influence to arrange for his mom to use the stones to board Destiny herself. Mrs. Wallace awakens on the ship and stunned, but thrilled to see Eli, who shows her the Observation Deck and tells her they are doing everything they can to get home. She eventually returns to Earth with renewed hope. As she prepares to leave the hospital, Sharon introduces herself, hoping to connect with someone else in her peculiar situation.

Theorizing that the neural interface chair will kill anything alien, Rush proposes using it on Chloe. She agrees, and they run the procedure. Colonel Young and the others are convinced that it worked, and Chloe is released from her confinement. But she later visits Dr. Rush, who confirms her suspicion: she is not really cured.

Desperate for any help she can provide, Rush gambles that he can trust her to keep her condition a secret. Chloe can help his research, and she'll play along because she values her freedom. But whether she can be trusted – and how far her transformation will continue to progress – remains to be seen.