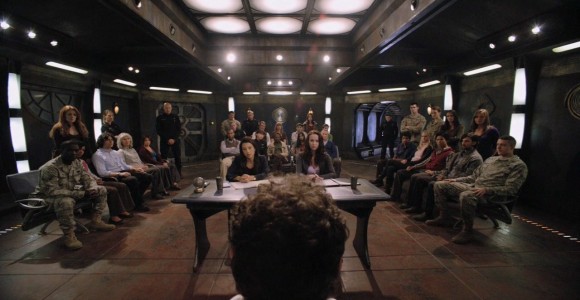 Colonel Young cedes command of the ship after he is implicated in the murder of a crew member.

Taste-testing an alien tuber, MSgt. Ronald Greer orders the sweet potato-like plant added to Destiny's menu even though Eli Wallace, Adam Brody and Jeremy Franklin gagged on and spit out their own samples. Since Sgt. Spencer is late for KP duty, Greer goes to the man's quarters. Spencer is dead, a bullet hole in his head.

In the absence of a gun, however, Colonel Everett Young can't officially label the death a suicide. He assembles all of Destiny's passengers in the Gate Room. Kino footage recorded Eli, Brody, Lt. Vanessa James, Lisa Park, and Lt. Matthew Scott playing poker at the approximate time of death. Accordingly, Young turns the investigation over to Scott. Those with confirmed alibi search crew quarters for the weapon – against protestations from some, like Dr. Franklin. Much to their surprise, Eli finds the gun behind an air vent in Colonel Young's quarters.

Incredulous, Scott wants to conceal the truth. Unwilling to turn the civilians against the military, Young yields command to Camille Wray. Though she suspects Greer, she checks with the I.O.A. via the communication stones. Young, under house arrest, asks Chloe Armstrong to defend him in the I.O.A.-ordered evidentiary hearing. He is convinced they want to convict him so Wray can take command of the ship permanently. Meanwhile, Scott and Eli search the kino footage for more information.

Testimony from Franklin, Dale Volker and Dr. Nicholas Rush hints that Young might have thought he had to take drastic action to prevent Spencer from damaging the ship, or worse, hurting someone. Lt. Tamara Johansen agrees with Chloe that, without any more of the sleeping pills he was taking, Spencer was likely sleep-deprived, in withdrawal and suicidal. She wishes she had only known about the state he was in.

During a break from the proceedings, Wray and Chloe clash about Wray's apparent eagerness to convict the Colonel with only circumstantial evidence. Young overhears civilians discussing the case, and recognizing that his credibility is dropping like a stone. Greer and other military personnel suggest putting an end to the hearing by force, but Young orders them to stand down. He voluntarily turns command of the ship over to Wray. In return, she drops the investigation for lack of evidence.

Seizing the opportunity presented by the change in leadership, Dr. Rush presses Wray for permission to step up his team's study of the recently discovered Ancient chair. Unlocking the chair's secrets is the number one priority for the science team consisting of himself, Franklin, Brody, Volker, Park and Eli. Rush believes that the risk of the chair killing whoever sits in it (downloading Ancient knowledge directly into his or her brain) is worth it, that they might finally gain access to Destiny's key systems. While not actually saying "Yes," Wray yields to Rush.

Later, Eli finds Dr. Franklin studying the chair. He asks Eli to get him some of the alien sweet potatoes. When Eli returns, Franklin is sitting in the chair, held in place by its restraints. The prong interface convulses an unseeing, whimpering Franklin, blood trickling from his temples where the chair interface has bored into his head. Rush and Eli try to shut down the chair. Of its own accord, the chair suddenly releases the scientist.

As T.J. tends to the now catatonic Franklin, Young accuses Rush of cowardice by covertly encouraging anyone else on the team to sit in the chair. When Wray steps between the pair, Lt. Scott makes Eli search the kino footage again. Scott is convinced that Young was framed, and he wants Eli to find out by whom.

Unexpectedly, Destiny drops out of F.T.L. flight and Wray is summoned to the Gate Room. Stopping her outside her quarters, Greer confronts her about why she has removed him from the away team roster. Wray faces down the intimating soldier and moves past him. In the Gate Room, Volker and Dr. Caine prepare to accompany James and Airman Rennie through the Stargate. Wray puts Volker – the civilian – in charge of the mission.

The planet is barren and rocky. After a long march, Caine stops to remove a stone from his shoe. Moving ahead, Volker and Rennie make a startling discovery: an alien ship half-buried in a hillside. It is the first sign of an advanced civilization the crew has seen in this part of space, since arriving on the Destiny.

Upon hearing the news, Rush gears up to see the ship first-hand, knowing that he'll only have a few minutes before he has to leave it – since Destiny will be jumping back into F.T.L. On his way to the gate, though, Young diverts him. Eli routinely backs up kino footage on his own computer's hard drive. He has found a suicide message recorded by Spencer. With the matter seemingly settled, Rush insists they investigate the alien ship before Destiny jumps. Young agrees, and accompanies Rush to the planet.

Caine and Volker determine that the dead ship is not Ancient, but they can't open the hatch to study it any further. Aware that their time is up, Young sends everyone back to Destiny. Rush pleads for a few minutes more. When they are alone, Young confronts Rush. The rest of the recording Eli recovered, he says, shows Rush entering the room after Spencer's death.

Rush confesses that he heard the shot and went to check it out. He decided to frame Young to make him step aside – believing that he would never be convicted of murder, but couldn't continue to lead, either. Rush doesn't believe Young is the proper man to command this mission, especially since Young gave up his SG command. While not proud of his actions, Rush tells him that he acted on behalf of the greater good. Young punches Rush several times. Picking up a rock, Rush hits Young. The two fight in the dirt until Young asks Rush, "Are we done?"

"We'll never be done!" Rush spits back. Young head butts Rush into unconsciousness, and leaves him behind.

Only 20 seconds remain on the Destiny's countdown clock when Young emerges through the Stargate. The ship jumps back to F.T.L. flight. As T.J. treats the Colonel's cuts and bruises, he explains that Rush triggered a rock slide and didn't make it out.

Wray formally returns command to Young, with his name cleared by the suicide message. Since only Eli saw the entire segment of deleted kino footage (implicating Rush), Young orders Eli to put the original footage on a flash drive and destroy what is on his own hard drive. Reluctantly, Eli agrees. But he is clearly uneasy, perhaps suspecting that Young may have marooned Rush on the desolate planet as retribution.

On the planet, night has fallen. Rush wakes up. He looks to the sky, realizing he has been left behind, without supplies, on the barren world.