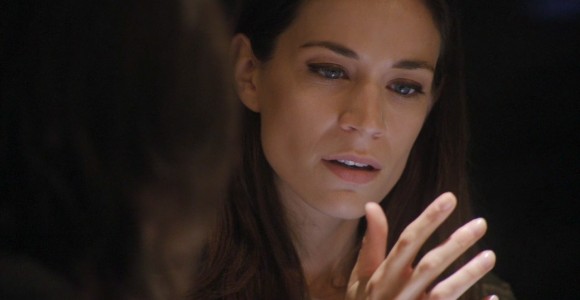 When problems with the F.T.L. drive threaten to leave Destiny stranded, the crew calls upon an expert from Earth to help – a quadriplegic woman who temporarily takes over Wray's body.

Colonel Everett Young informs Destiny's crew that they have entered the void between galaxies. Unsure of how long the ship will take to cross the vast expanse of nothing, they will begin conserving rations and water immediately. He has no words to console them over the recent loss of Lt. Matthew Scott, Chloe Armstrong and Eli Wallace ("Lost").

Destiny is conserving her power. Despite those efforts, Dr. Nicholas Rush realizes she will still fall short of the next galaxy by 50,000 light years. Adam Brody points out that they might make it if they could simply increase the efficiency of the F.T.L. drives. Rush calculates that a mere 5 percent increase should provide enough energy. He recommends bringing a hyperdrive specialist from Earth, Dr. Amanda Perry, onboard using the communication stones. She is someone he worked with previously, and in whom he has great confidence.

The transfer will be complicated because Dr. Perry is quadriplegic. Promised time with her family, Lt. Vanessa James volunteers. But she is unable to handle the body she swaps into (especially the breathing apparatus), and hastily returns to Destiny. Camille Wray takes her place. Once the swap is complete, Wray refuses to meet with her boss, the I.O.A.'s Dale Strom ("Earth"). Instead, she insists on going straight home to see her partner, Sharon ("Life"). Dr. Perry's long-time caregiver, Mary, accompanies Wray.

On a tour of Destiny, Perry pauses to sample a fruit brought back from a recent planetary visit. It's the first food she has fed herself since her accident when she was nine. In the chair interface room Perry consults with Rush, Brody, Dr. Dale Volker, and Colonel Young when one of the ship's engine explodes, dropping Destiny from F.T.L. flight. Deciding it's a malfunction, Volker pilots a kino around the rear of the ship to investigate the engine.

The jarring few moments surrounding the explosion caused a number of injuries. Lt. James has suffered a memory lapse. Dr. Jeremy Franklin, catatonic since he sat in the Ancient chair months ago ("Justice"), was thrown on the floor. As they bring him into the infirmary, he seems to look at James for a moment before his gaze goes blank again.

Watching the kino footage in the Gate Room, the Stargate suddenly lights up and Rush calls for MSgt. Ronald Greer and a defensive team. Chloe, Eli, and Scott step through. Still within range of the planet's Stargate, Destiny alerted Eli's kino remote that the ship had dropped from F.T.L. flight, so they dialed in. The engine's explosion fortuitously saved them.

After several days of studying the ancient ship and its propulsion system, Perry believes the explosion exposed the most inefficient drive. If they can isolate and bypass it, the ship should be able to cross the void. Since they can't simply direct the ship to do this, the repairs must be made manually. Eli suggests using the robot they recently discovered in one of the Ancient storage crates ("Faith").

As the robot toils, Lt. Tamara Johansen and a team prepare to explore the planet from which Lt. Scott's team dialed in. Young insists Eli send a kino through the Stargate first. He is still protesting when the kino spots two alien ships opening fire. With the planet now off limits, everyone settles in, waiting for the repairs to be completed.

On Earth, even though she enjoys some personal time with Sharon, Camille feels the limitations of Perry's quadriplegic body, and grows frustrated. Brody uses the time to build Destiny's first still. After Chloe and Lt. James try the first batch of alcohol, James tells Chloe of her odd, recurring dream about not being herself, in a dark place, with others watching her. Chloe recognizes her own nightmares after being held hostage by the aliens that are still chasing them ("Space"). They tell Colonel Young.

Meanwhile, Rush and Perry have a drink to celebrate the successful removal of the damaged engine. Rush escorts her back to her quarters. Amanda, finally able to act on her long-held feelings for Rush, kisses him. But Nicholas pulls back. His recent reliving of Gloria's last months has left her death as fresh for him as when it first happened ("Human"). Understanding, Perry holds him as he cries. T.J. soon arrives to summon them to the Interface Room.

When Lt. James broke her link with Perry, the communication stone was left active. Now they suspect that one of the hostile aliens swapped bodies with James and sabotaged the drive. He also likely relayed Destiny's position. The crew prepares for battle. Destiny can't withstand a sustained weapons bombardment, and escape through the Stargate is blocked. The only way to escape the impending attack is for someone to use the chair interface to command Destiny to enter F.T.L., now that the drive is repaired.

Young reports their situation, intent on risking his life to sit in the chair. Wray returns to the Pentagon, as Perry will likely be returning home soon. As Young briefs the crew, Franklin – who is being fed by James – reacts, almost imperceptibly. She races to the chair room as two alien ships arrive and begin firing at Destiny.

Realizing that Franklin is better prepared to sit in the chair than Colonel Young, they take him to the chair room. As the interface connects, cold mist swirls through the room. Franklin orders everyone out. Leaving Sgt. Hunter Riley to guard the room, Young and Rush head for the Interface Room. By the time they arrive, the countdown clock is ticking, the engines warming up. A number of the smaller, alien fighters are destroyed when Destiny jumps to F.T.L. flight.

Her work finished, Perry bids goodbye to Rush and ends her dream experience by returning to Earth. Wray is relieved to be in her own body again.

Young and James open the door to the chair interface room. But despite the door having been sealed and guarded, Franklin has vanished.