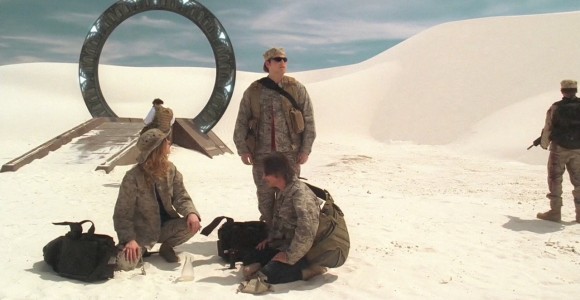 Lt. Scott leads a team to a desert planet to locate a mineral capable of fixing Destiny's life support system. Chloe visits her mother on Earth.

Lt. Matthew Scott, MSgt. Ronald Greer, Eli Wallace, Dr. Nicholas Rush, Franklin, Andrea Palmer and Curtis, a marine, step through the Stargate onto a world of blinding sun and sand dunes as far as the kino can see. Palmer tests the sand in front of the gate. The concentration of calcite, needed for repairing Destiny's air scrubbers, is not high enough. They set off, hoping to locate lime in a dried lake bed.

They have only 12 hours to return to the ship, or they will be left behind – and everyone on board will die.

Briefing Mrs. Armstrong, Green allows the two women to meet. To Chloe's dismay, her mother collapses when Chloe shares the circumstances surrounding the Senator's heroic death. Before Chloe leaves, Mrs. Armstrong threatens to go public with the Stargate program if Chloe is not returned safely to her.

Alone with O'Neill, Colonel Young expresses his reservations about Destiny and the people trapped there. Jack responds that no one involved with the Stargate program is really qualified to be there. But Young warns the General that each of his people will need to say their goodbyes to those on Earth.

On Destiny, Telford tries to take charge without fully understanding the situation. He wants more frequent contact with Lt. Scott than Destiny may have energy for. He also wants a work-around to dial the addresses locked out by the Destiny ("Air, Part 2"A). Lt. Tamara Johansen, concerned by Telford's attitude, administers a sedative and knocks him out to prevent him from further exacerbating Young's injuries.

After several hours of walking and testing, Scott splits their party into two teams. Putting Eli in charge, he sends him, Franklin, Curtis and Palmer off with instructions to walk and test for two hours before turning back toward the Stargate. With Rush and Greer, Scott sets a faster pace for their group.

Tired and discouraged as they continue to march, Rush conducts another sand test. It is a failure. Feeling defeated, he suggests turning back. Greer insists they move on after he and Rush fight. Oblivious, Scott watches a small vortex hover nearby. Realizing the others haven't seen it, he leads on. The vortex, stopping to absorb the water used in the test, follows.

Eli's team is also frustrated by negative results. Franklin discovers a way to use the hand-held D.H.D. remote to dial the Stargate addresses blocked by Destiny's programming. Palmer is keen to try the other addresses, to find a habitable planet to evacuate to. She, Franklin and Curtis agree to return to the Stargate and pursue this alternative.

Exhausted now, Rush insists on returning to the Stargate. He gives Scott his canteen and the testing equipment. Eli radios Scott about Franklin's plan. Rush and Greer head back. Their earlier disagreement escalates into a physical fight which ends with Greer pointing a gun at Rush's head. But they trudge on.

Reaching the Stargate, Franklin dials an address and sends the kino to investigate. The world has an atmosphere, water and vegetation. Eli tries to talk them out of it, but Curtis steps through and Palmer follows. Franklin starts toward the Stargate, just as Greer and Rush crest the sand dune. Greer fires a warning shot. Afraid he'll be stopped, Franklin runs toward the wormhole. Rush tells Greer to shoot him, and a bullet to the right shoulder fells Franklin.

Eli grabs the remote device. They have six hours left. Greer sends Dr. Rush and Franklin back to Destiny. Ordering Eli to wait at the Stargate, he sets off across the desert again to find Scott.

Scott sees the vortex again. He pours water on the sand. The vortex absorbs it. Moving away, the face of a bearded priest emerges. The visage disappears – but the vortex hovers, as if encouraging Scott to follow.

The vortex and the image of the priest accompany Scott, pushing him to press on. When Scott takes a drink of water, the priest sips from a flask. Scott refuses to fail the people on Destiny the way he did this priest. But the heat takes its toll.

Barely able to walk, Scott finally abandons his gear. He crawls on, seeing a hallucination of a crucifix in the sand. It's the crucifix in the church where, years ago, he confessed to getting a 16-year-old girl pregnant. It was a crisis moment in Matthew's life.

Unconscious, face down in the sand, Scott is unaware as the vortex whirls into the sand near his head. Water bubbles out of the desert floor, rousing him. Realizing he's found the lime they need, he shovels it into his pack. He starts for the Stargate, knowing he may not make it.

As Johansen and Chloe operate on Franklin, Rush oversees cleaning and prepping the air scrubbers. Everyone else sits quietly. It is difficult to breathe. Marines, led by 2nd Lt. Vanessa James, search the planet near the gate for Scott and Greer. Eli remains beside the Stargate, watching for the two and trying hail Palmer and Curtis through the Stargate.

Greer finally finds his friend, who has again collapsed, unable to go on. He gives him a drink of water and drags him to his feet, ordering him onward. They are within sight of the Stargate when Destiny's mission clock expires. The ship's engines power up. Eli sees Greer and Scott running full-bore to the gate ... but there just isn't enough time. They aren't going to make it.

Dr. Rush instructs Eli to stick his arm into the Stargate's event horizon. He presumes that there are safety protocols, which will keep the gate open and the ship out of F.T.L. It buys Scott and Greer the time they need. As they tumble through the Stargate, the ship's F.T.L. drive engages.

The lime is prepared and poured into the air scrubbers. Fresh, clean air wafts through the ship. In Matthew Scott's quarters, Chloe tends to him. He tells her of the priest who raised him after his parents died, and how Matt felt that he had let him down. "There's just some things you never get over," he tells her.

Unobserved, a small vessel of unknown origin lifts off from Destiny's exterior and flies away.