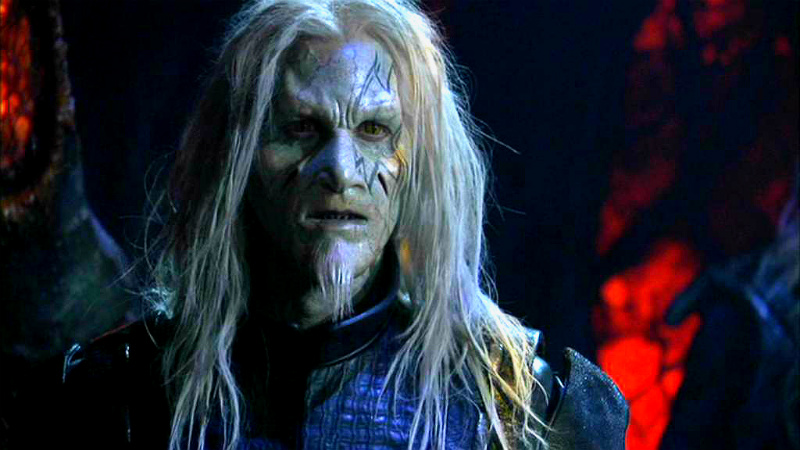 Wraith commander held in captivity by Acastus Kolya for many years, later nicknamed "Todd" by Colonel John Sheppard to distinguish him from other nameless Wraith. During his years in captivity the Genii commander used him for his own purposes, allowing him to feed on other prisoners and gaining leverage at the bargaining table. Once free, he became one of the most influential Wraith commanders in the Pegasus Galaxy, using his tenuous alliance with the humans in Atlantis to his advantage.

Todd was left in a chamber adjacent to another prison cell eventually occupied by Sheppard. In the hopes of capturing Ladon Radim, Kolya took Sheppard and allowed Todd to gradually feed on the Colonel, hoping to force a trade with Atlantis. But Dr. Weir refused, and Sheppard and the Wraith were able to escape -- working together for the time being, but agreeing that if they ever met again, they would be enemies.

One year later the Wraith made contact with Sheppard, and was taken prisoner and held in Atlantis for several weeks. Todd revealed himself to be a brilliant scientist, and worked with Rodney McKay in an attempt to rewrite the Asurans' base code and deactivate the command that was prompting them to attack the Wraith across the galaxy. At this task they ultimately failed, but when McKay came up with another plan to stop the Replicators, Todd did manage to negotiate a temporary alliance and bring several hive ships into the fight.

Endlessly cunning, Todd stole an undetermined amount of intelligence data during his time in Atlantis. Soon after he left, the team learned that he had stolen a Z.P.M. from the Asurans in order to power his secret cloning operation. Todd had planned to create an army of Wraith soldiers to conquer the other factions, but he was betrayed and his facility taken by a rival queen. Later, he again sought help from the team to try and find a cure to the Hoffan drug -- which the Wraith Michael was using to randomly taint the Wraith's food supply and sow the seeds of a civil war. The team provided him with a limited amount of research on the drug in exchange for his help.

Todd continued to be a tentative ally of Atlantis, capable of helping them when they were most in need -- but always out for his own interests. He delivered intelligence that helped to stop a Wraith attack on Earth, and remained in custody in Atlantis when the city relocated there.

Common Ground - Kolya's captured Wraith makes a deal with Colonel Sheppard: fight past the guards and escape to the Stargate -- together.
The Seer - Sheppard's Wraith friend makes contact with Atlantis, and is taken prisoner by the team.
Miller's Crossing - McKay seeks help from the Wraith to reprogram Replicator nanites in order to save his sister's life. But first the starving creature needs to be fed.
Be All My Sins Remember'd - Todd negotiates an alliance between the Wraith and Atlantis, commanding a ship in their joint strike on the Replicator home world.
Spoils of War - The team discovers that their old friend "Todd" stole a Z.P.M. from the Replicators to power a secret cloning operation, but has been double-crossed by one of his own.
Midway - Todd's former Wraith ally uses information that Todd stole from Atlantis to penetrate the Midway Space Station and make a play for Earth.
The Kindred, Part 1 - Todd informs the team that someone is using the Hoffan drug to randomly taint the Wraith's food supply, and seeks their help to develop a cure.
The Last Man - An aged McKay tells Sheppard that in an averted timeline, Todd and Ronon gave their lives to destroy one of the Wraith Michael's key facilities. The Queen - Todd uses Teyla, disguised as a Wraith queen, to infiltrate another hive and kill its queen, expanding his power base.
First Contact - Todd comes on board the Daedalus to negotiate to have his soldiers begin taking an experimental treatment that will eliminate their need to feed on humans.
The Lost Tribe - Believing he has been betrayed by Atlantis, Todd seized control of Daedalus and attempts to crash it into a facility housing a dangerous, anti-Wraith weapon.
Infection - Todd brings his crippled hive ship to Atlantis, revealing that Dr. Keller's treatment has had catastrophic side-effects for his people -- including Todd himself, who is near death.
Vegas - In a parallel reality, Dr. McKay introduces Detective John Sheppard to a captured Wraith prisoner -- that reality's version of Todd.
Enemy At the Gate - Todd returns, healed from his ordeal, turning himself over to Atlantis and bearing news of a powerful new Wraith threat.